0.40858
-0.00119 (-0.29%)
Real-Time
Market Open
0.40858
Shiba Inu Off To Weak Start This November As SHIB Faced Selling Pressure In Last 7 Days
November 04 2022 - 09:40AM
NEWSBTC
Shiba Inu squandered its gains during the tail end of October that enabled it to add almost $2 billion to its total market cap which currently stands at $7.29 billion. At the time of this writing, SHIB is changing hands at $0.00001242 according to tracking from Coingecko. It is still up by 16% over the last seven days, but has been on a decline after peaking at $0.00001421 on October 30. As the crypto asset once failed to sustain its bullish rally, analysts believed it will once again be caught in a downward trend and will be poised to return to its price levels prior to the October 25 crypto market rally and Elon Musk’s Twitter takeover. If its current price trajectory is any indication, Shiba Inu, by the looks of it, is really headed towards that direction. Related Reading: Why Monero Is Struggling To Crack This Resistance Level Since September Whales Save Shiba Inu This Time On November 2, the SHIB network witnessed four whale transactions that were indicative of relatively strong buying pressure. During the same time, the altcoin registered a $110 million increase in its market capitalization, a development that once again proved that whales indeed have bigger impact on an asset’s price. Although details of the transactions are not yet released as of press time, what is clear is that it enabled Shiba Inu to return to the green zone on its intraday performance, going up by 2% over the last 24 hours. It would seem that the whales (big investors) that are to be credited for the recent buying pressure observed relative to the crypto averted the crypto’s return to a downward movement, at least for now. SHIB remains one of the top gainers among all cryptocurrencies over a seven-day period, increasing by 16.2%. Investors, however, are still cautioned to keep a close watch at the altcoin’s progress over the next few days as it is walking on extremely thin ice. Lack Of Strong Demand Continues To Cripple SHIB Towards the end of October, Shiba Inu got a lot of help for its price rally as it mirrored the movement of Dogecoin which rallied following Elon Musk’s completion of the deal that enabled him to own social media giant Twitter. But that turned out to be a double-edged sword as SHIB declined the moment DOGE lost its own momentum. Another factor that continues to hurt the crypto’s chances for sustained price surges is the lack of strong demand for it. On network level, there is limited retail involvement, indicating that daily active addresses weren’t enough to push demand for SHIB tokens to significant levels that could support more upswings in trading prices. Related Reading: Cardano Seen Hitting Over $0.50 By End Of November, This Algorithmic ‘Prophet’ Predicts SHIB total market cap at $6.64 billion on the daily chart | Featured image from Pixabay, Chart: TradingView.com Disclaimer: The analysis represents the author's personal understanding of the crypto market and should not be construed as investment advice.
Ripple (COIN:XRPUSD)
Historical Stock Chart
From Dec 2022 to Jan 2023 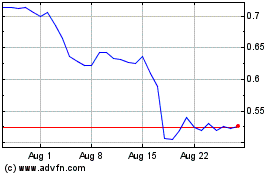 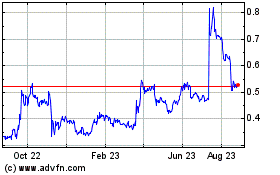 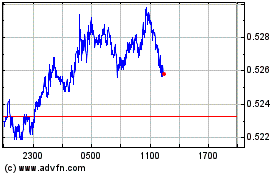