0.635
0.0261 (4.29%)
Upgrade to Real-Time
Afterhours (Closed)
0.635
Current Report Filing (8-k)
August 02 2022 - 06:07AM
Edgar (US Regulatory)
falseATHERSYS, INC / NEW000136814800013681482022-07-282022-07-28
UNITED STATES
SECURITIES AND EXCHANGE COMMISSION
WASHINGTON, DC 20549
FORM 8-K
CURRENT REPORT
Pursuant to Section 13 or 15(d)
of the Securities Exchange Act of 1934
Date of report (Date of earliest event reported): July 28, 2022
Athersys, Inc.
(Exact Name of Registrant as Specified in Charter)
Registrant’s telephone number, including area code: (216) 431-9900
(Former Name or Former Address, if Changed Since Last Report)
Check the appropriate box below if the Form 8-K filing is intended to simultaneously satisfy the filing obligation of the registrant under any of the following provisions:
Securities registered pursuant to Section 12(b) of the Act:
Indicate by check mark whether the registrant is an emerging growth company as defined in Rule 405 of the Securities Act of 1933 (§230.405 of this chapter) or Rule 12b-2 of the Securities Exchange Act of 1934 (§240.12b-2 of this chapter).
Emerging growth company  ☐
If an emerging growth company, indicate by check mark if the registrant has elected not to use the extended transition period for complying with any new or revised financial accounting standards provided pursuant to Section 13(a) of the Exchange Act.  ☐
Item 5.02. Departure of Directors or Certain Officers; Election of Directors; Appointment of Certain Officers; Compensatory Arrangements of Certain Officers.
At the Annual Meeting of Stockholders of Athersys, Inc. (the “Company”), postponed to July 28, 2022 (the “Annual Meeting”), the stockholders of the Company, upon recommendation of the Company’s Board of Directors (the “Board”), approved the amendment and restatement of the Athersys, Inc. 2019 Equity and Incentive Compensation Plan (the “Plan”). The following description of the Plan is qualified in its entirety by reference to the Plan itself, which is filed as Exhibit 10.1 to this Current Report on Form 8-K.
In general, the Plan continues to authorize the Compensation Committee of the Board to provide cash awards and equity-based compensation in the form of stock options, stock appreciation rights, restricted stock awards, restricted stock units, performance shares, performance units, dividend equivalents, and certain other awards, including those denominated or payable in, or otherwise based on, the Company’s common stock. The purposes of these awards are to help provide the Company’s non-employee directors and officers and other employees of the Company and its subsidiaries, and certain consultants and other service providers of the Company and its subsidiaries, incentives and rewards for service and/or performance. Subject to adjustment as described in the Plan and the Plan’s share counting rules, a total of 39,463,737 shares of Company common stock are available for awards under the Plan (18,463,737 of which were originally approved by stockholders at the Company’s 2019 annual meeting of stockholders, and 21,000,000 of which were approved by stockholders at the Annual Meeting), plus Company common stock subject to any forfeitures (or similar events) that occur regarding awards under the Plan or the original version of the Plan.
Stockholder approval of the Plan also: (1) correspondingly increased the limit on shares that may be issued or transferred upon the exercise of incentive stock options granted under the Plan during its duration by 21,000,000 shares; (2) extended the term of the Plan until July 28, 2032; (3) revised the default definition of “change in control” from what was included in the original version of the Plan; and (4) amended the limit on the amount of compensation a non-employee director may be awarded each year under the Plan (total non-employee director compensation of no more than $750,000 per year per non-employee director); all as further described in the Plan, plus certain other conforming, clarifying or non-substantive changes to the original version of the Plan. The Plan administrator generally will be able to amend the Plan, subject to stockholder approval and/or awardee consent in certain circumstances as described in the Plan.
Item 5.07    Submission of Matters to a Vote of Security Holders.
Set forth below are the voting results for each of the matters submitted to a vote of the Company's stockholders at the Annual Meeting.
Proposal One - Election of Directors.
All nominees for election to the Company’s Board of Directors named in the Company’s proxy statement filed with the Securities and Exchange Commission on July 1, 2022 were elected, each to a one-year term, with the following vote:
Proposal Two - Ratification of the Appointment of the Company’s Independent Auditors.
The Company's stockholders ratified the appointment of Ernst & Young LLP as the Company's independent registered public accounting firm for the fiscal year ending December 31, 2022 with the following vote:
Proposal Three - Approval of the amendment and restatement of the Athersys, Inc. 2019 Equity and Incentive Compensation Plan.
The Company’s stockholders approved the Plan with the following vote:
Proposal Four - Approval of an Amendment of the Company’s Certificate of Incorporation (the “Amendment”) to effect a reverse stock split of the Company’s Common Stock; and
The Company’s stockholders approved the Amendment with the following vote:
Proposal Five - Approval, on an advisory basis, of Named Executive Officer Compensation.
The Company's stockholders approved, on an advisory basis, the compensation of the Company’s named executive officers with the following vote:

Item 9.01.    Financial Statements and Exhibits.
(d) Exhibits.
SIGNATURES
Pursuant to the requirements of the Securities Exchange Act of 1934, the registrant has duly caused this report to be signed on its behalf by the undersigned hereunto duly authorized.
Date: August 2, 2022
Athersys (NASDAQ:ATHX)
Historical Stock Chart
From Nov 2022 to Dec 2022 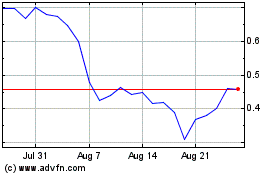 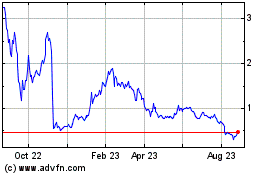 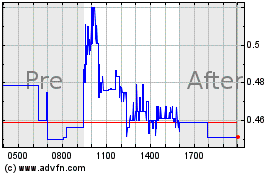