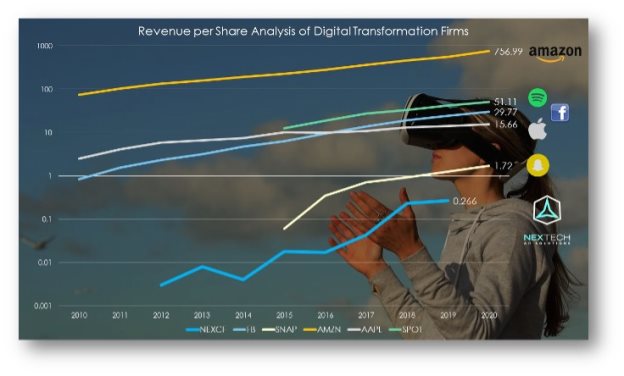 Easily one of the most paradigm-shifting events that have occurred in the trailing two decades was the advent of e-commerce. With the innovation of connectivity that the internet engendered, it was now possible to facilitate multiple transactions that traditionally occurred face-to-face through online platforms. Moving forward, NexTech AR Solutions (OTCQB: NEXCF) stands poised to fill the opportunity gaps that currently exist in the digitalization ecosystem. 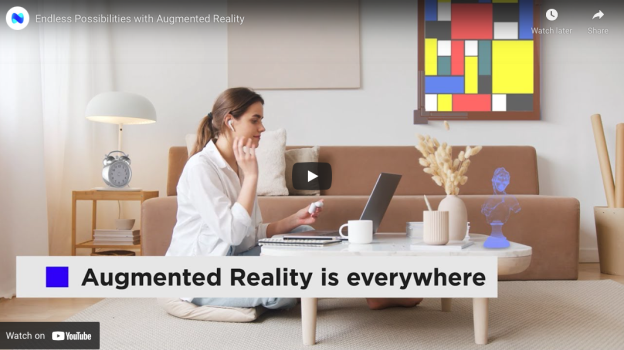 Fundamentally and financially, NexTech AR makes a strong argument that it's one of the most undervalued investments in the digital transformation space. Still, groundbreaking companies like this don't stay under-the-radar for long, which is why you'll want to consider NEXCF stock now. 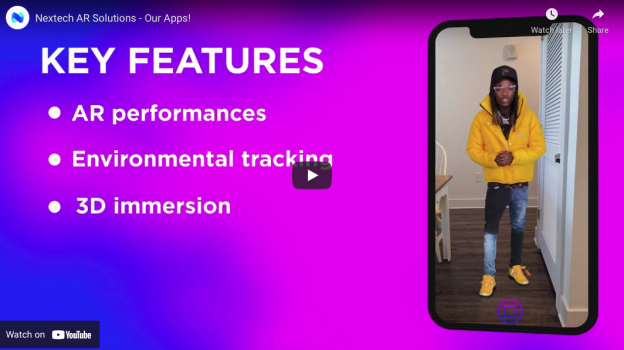 According to the Harvard Business Review, augmented reality is defined as a set of technologies that superimposes digital data and images on the physical world. This is distinct from virtual reality, where such systems project images within an artificially manufactured environment – hence the VR headsets.

By integrating AR platforms with current retail channels, NexTech AR brings comprehensive product evangelism to the transactional edge. With the consumers' questions and concerns answered, they only need to hit the "buy" button.

It's no wonder that according to some expert sources, the augmented reality industry could hit $72 billion by 2024 and skyrocket to over $340 billion globally by 2028.

One of the hallmark features of the augmented reality market and the broader digital transformation movement is that they embody full-spectrum solutions. 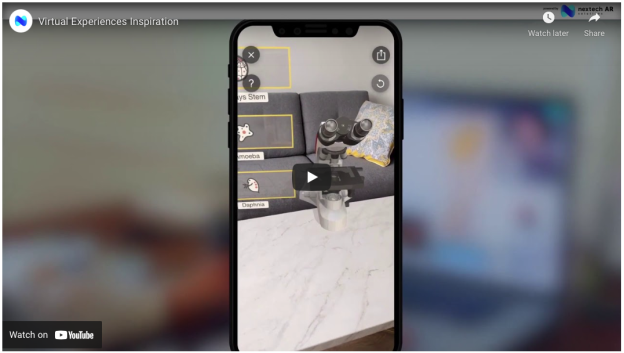 As NexTech AR's management team puts it, we're hurtling toward an ecosystem where we can:

As such, NexTech AR has a favorable valuation profile that should not be ignored. Over the trailing-12-month period, NexTech has delivered $20.2 million in bookings +233% 2019 $6 million total. Moreover, the company has a very low float compared to its rivals, with only 75.2 million shares outstanding and 2.2 million unexercised warrants.

As of the latest data, we're looking at a revenue per share for NEXCF stock of 0.15, up approximately 67% from the prior year. To see how this stacks up, consider the following stats:

To be fair, you generally want to see a stock trade at some multiple of revenue – of course, the higher this metric, the more sales each unit of equity is tied to. However, having this ratio get too high can turn off many investors, who don't see as much growth opportunities. For instance, it's hard to imagine Amazon at 757-times revenue expanding much more until it reaches a maturation point, if it hasn't done so already.

To be fair, you generally want to see a stock trade at some multiple of revenue – of course, the higher this metric, the more sales each unit of equity is tied to. However, having this ratio get too high can turn off many investors, who don't see as much growth opportunities. For instance, it's hard to imagine Amazon at 757-times revenue expanding much more until it reaches a maturation point, if it hasn't done so already.

Also, most of these companies have a much broader base of shares outstanding. Spotify comes the closest to NexTech AR with a little under 200 million shares outstanding. But because of its meteoric financial growth, it's possible that SPOT shares are getting stretched.

For instance, between 2018 and 2019, revenue per share grew by nearly 26%. But from 2019 to last year, RPS growth slipped to 23%. Plus, Spotify is a well-known entity, accruing significant investor interest. At some point, though, growth investors start to look for much more viable opportunities.

That's why NEXCF stock is particularly exciting. With a time of writing market cap of only 384 million CAD (approximately $307.6 million USD), you're really getting into a pure-play AR investment at a fraction of the valuation of the alpha dogs. 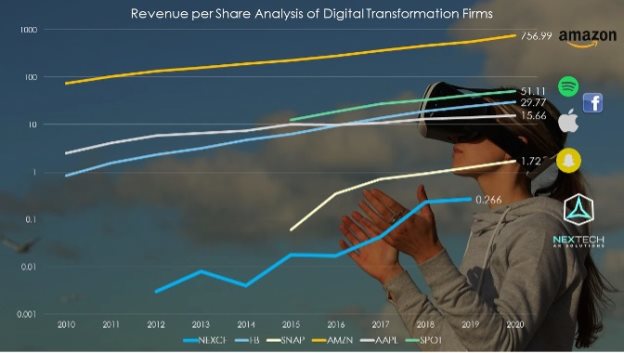 The fact of the matter is that roughly 97% of Facebook revenue comes from selling advertisements. Even with Facebook's push toward AR/VR solutions, it's merely a drop in the bucket for FB stock.

In contrast, NEXCF stock is geared toward everything AR. Yes, that has its risks – you've got to be aware of that. But if you believe in the burgeoning AR and digital transformation market, one that collectively will haul in trillions of dollars, NexTech represents one of the very few plays where you can accrue a windfall, not a pittance, from this industry's growth trajectory.

And on a critical sidenote, NEXCF stock isn't just undervalued relative to publicly traded companies – or even the AR industry specifically. Due to the terrible Covid-19 pandemic, millions of workers have been forced to work from home. Though new coronavirus cases have declined sharply this year, the Wall Street Journal reports that a mass scale return to the office remains in limbo.

This has sparked intense competition in the space, with Hopin being one of the top competitors to NexTech AR. Recently, Hopin announced that it closed a $400 million Series C private funding round, which places its valuation between $5 billion and $6 billion.

Prior to the Series C funding, rumors suggested that Hopin could go public via a special purpose acquisition company or SPAC. However, one of the drawbacks regarding SPACs is that their sponsors typically receive about 20% equity in the eventually combined entity, which is incredibly dilutive for shareholders. Therefore, many companies that go the SPAC route eventually fizzle out.

Now, with significant demand in the private funding space, it's possible that Hopin will go public via a traditional initial public offering, with a potential target of 2022 or 2023.

One of the beautiful things about NEXCF stock is that it hasn't yet absorbed this manic influx of investor dollars. However, it's very possible that it might. In its recent corporate presentation, management disclosed that it's awaiting approval for listing NEXCF shares on the Nasdaq exchange. If that goes through, there's a great chance that more eyeballs will assess this opportunity.

When they do, they'll likely key in on the AR industry potential and the valuation profile of NexTech AR Solutions, auguring well for NEXCF stock. But you'll want to consider getting in now before the big wave of buyers do.

Shares of Cytodyn, Inc. (OTCQB: CYDY) gapped down on March 8th and have been trending around the $2.40 mark ever since.    The space has been severely beaten down especially yesterday but Cytodyn held its ground.  Look for a rebound once the sector as a whole turns positive.  Support is currently around $2.00.

Shares of Humbl, Inc. (OTC Pink: TSNPD) have been upticking since the announcement of the Aurea Group Ventures investment nearly 30%.  That being said, volume is slowing in the stock and pending market conditions, the shares could stabilize here before moving higher.

Shares of Amarin Corp. (NASDAQ: AMRN) traded down 7% yesterday with the rest of the biotech stocks.  It has support at around 5.40 but as they closed on a downtrend, the industry could see some more red today.

Gamestop Corp (NYSE: GME) saw a decline of 20% in the aftermarket yesterday after announcing earnings.  This stock has room to fall to $86, and then has support around $38.50 which wold break the 200 EMA.

Keep an eye on Nextech AR Solutions (OTCQB: NEXCF).  The CEO purchased shares 5 times in 2020, and once already in 2021.  This could be the next short squeeze and Zacks Investment Research Valuation of Nextech AR (OTCQB: NEXCF) $8.60 per share.

The company is pursuing four verticals:

Virtual Experience Platform (VXP): An advanced Augmented Reality and Video Learning Experience Platform for Events, is a SaaS video platform that integrates Interactive Video, Artificial Intelligence and Augmented Reality in one secure platform to allow enterprises the ability to create the world's most engaging virtual event management and learning experiences. Automated closed captions and translations to over 64 languages. According to Grandview Research the global virtual events market in 2020 is $90B and expected to reach more than $400B by 2027, growing at a 23% CAGR. With Nextech's VXP platform having augmented reality, AI, end-to-end encryption, and built-in language translation for 64 languages, the company is well positioned to rapidly take market share as the growth accelerates globally.

ARitize™ For eCommerce: The company launched its SaaS platform for webAR in eCommerce early in 2019. Nextech has a 'full funnel' end-to-end eCommerce solution for the AR industry including its Aritize360 app for 3D product capture, 3D/AR ads, its ARitize white label app, its 'Try it On' technology for online apparel, 3D and 360-degree product views, and 'one click buy'.

ARitize™ 3D/AR Advertising Platform: Launched in Q1 2020 the ad platform will be the industry's first end-to-end solution whereby the company will leverage its 3D asset creation into 3D/AR ads. In 2019, according to IDC, global advertising spend will be about $725 billion. 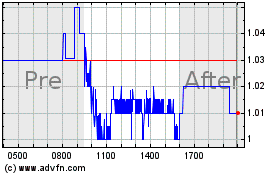