The Company previously disclosed in its Form 10-K for the year ending December 31, 2019 (the “2019 10-K”) and subsequently that the assets of PDN China were frozen by Chinese local authorities in November 2019 in connection with the criminal investigation of alleged illegal public fund raising by Gatewang Group (the “Gatewang Case”), a separate company organized under the laws of the People’s Republic of China (“Gatewang”), with which Mr. Maoji (Michael) Wang, the former Chairman and CEO of the Company was affiliated. A subsequent investigation led by a special committee of the Board concluded that it did not find any evidence that the Company or PDN China has engaged in the criminal activity of illegal fund-raising as alleged against Gatewang. The Company subsequently discontinued all of its operations in China.

The Company also previously disclosed in the 2019 Form 10-K that although the seizure of PDN ‎China’s assets had been lifted in March 2020, PDN China’s bank account (the “PDN China Account”) with a balance of RMB 20,080,467 (approximately $3.1 million) continued to be frozen by the Chinese local authorities pending the outcome of the Gatewang Case. The Company has classified this entire cash balance as a long-term asset (the “Frozen Cash Asset”) of discontinued operations in its financial statements.

On April 22, 2021, the Company learned that RMB 18,841,064.15 (approximately $2.87mm) had been seized from the PDN China Account by Longxu District Court of Wuzhou City in Guangxi Province to satisfy a judgment in favor of the plaintiffs in the Gatewang Case. On April 26, 2021, the Company concluded that the seizure of such cash assets is a material reduction of Company assets required to be reported by this filing. The cash value at time of seizure is approximately $2.87 mm. The Company has asserted its claim to these funds as the genuine owner to the Chinese officials and asked for their return. The Company plans to pursue all possible legal alternatives to have these funds returned to the Company but such return is uncertain at this time.

The seizure of these cash funds reduces the Company’s shareholders’ equity by an equal amount, which results in its stockholders’ equity being less than the $2.5 million required by The Nasdaq Stock Market LLC (“Nasdaq”) under its Listing Rule 5550(b)(1) for continued listing of the Company’s common shares on the Nasdaq Capital Market. The Company plans to explore alternatives for increasing its stockholders’ equity in order to meet Nasdaq’s listing requirements, including the possibility of issuing additional equity. However, there can be no assurance that the Company will be successful in raising additional equity. 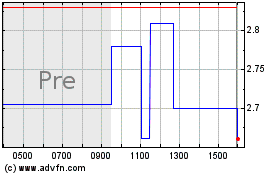