ASHFORD INC.
(Exact name of registrant as specified in its charter)

Not Applicable
(Former name or former address, if changed since last report)

Check the appropriate box if the Form 8-K filing is intended to simultaneously satisfy the filing obligation of the registrant under any of the following provisions:
Indicate by check mark whether the registrant is an emerging growth company as defined in Rule 405 of the Securities Act of 1933 (§230.405 of this chapter) or Rule 12b-2 of the Securities Exchange Act of 1934 (§240.12b-2 of this chapter).
Emerging growth company    ☐
If an emerging growth company, indicate by check mark if the registrant has elected not to use the extended transition period for complying with any new or revised financial accounting standards provided pursuant to Section 13(a) of the Exchange Act. ☐
Securities registered pursuant to Section 12(b) of the Act:
Item 3.01    Notice of Delisting or Failure to Satisfy a Continued Listing Rule or Standard; Transfer of Listing.

However, Section 1003(a) states that the NYSE American will not normally consider suspending dealings in, or removing from the list, the securities of a listed company which is below standards (i) and (ii) of Section 1003(a) if the listed company is in compliance with the following two standards: (1) total value of market capitalization of at least $50 million; or total assets and revenue of $50 million each in its last fiscal year, or in two of its last three fiscal years; and (2) the listed company has at least 1.1 million shares publicly held, a market value of publicly held shares of at least $15 million and 400 round lot shareholders. As of August 26, 2020, the Company was in compliance with the first standard because it had total assets and total revenue of at least $50 million in its last fiscal year and was in compliance with the second standard, except that the current market value of publicly held shares was below $15 million. 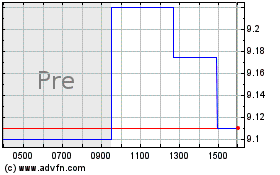