Georgia Power, an electric subsidiary of Southern Co., said Friday it issued a sustainability bond, adding it was the first such bond by a U.S. utility.

The company said the 3.25% coupon represents the lowest 30-year coupon for a publicly traded bond ever issued by any affiliate of Southern Co.

The bond's net proceeds of about $742 million will be allocated to fund sustainable projects such as spending with diverse and small business suppliers and investments in renewable energy projects, Georgia Power said. 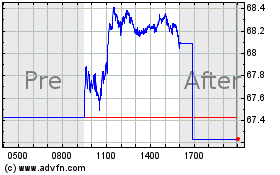