NEW YORK, Sept. 6, 2020 /PRNewswire/ -- IMAX Corporation (NYSE: IMAX) today announced that Warner Bros. Pictures and Christopher Nolan's "Tenet" continued to beat expectations in its debut, earning $11.1 million in IMAX weekend global box office — the biggest global box office weekend ever in September for IMAX — as it expanded into China, the United States and Russia. IMAX theatres delivered 14% of overall weekend global box office, while accounting for only 1% of screens. "Tenet" has now earned $16.3 million in IMAX since its August 26 international release, despite seating capacity limitations of at least 50% in most markets worldwide. 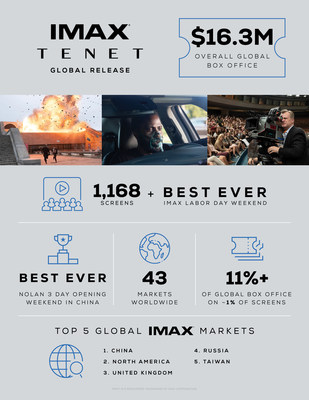 "We'd hoped and believed that audiences were eager to return to the movies where it is safe, and to see it in action and hear the excitement for 'Tenet' from fans around the globe is gratifying  — especially for a film captured with our cameras by a visionary like Christopher Nolan," said Rich Gelfond, CEO of IMAX. "As the world's only global theatrical platform, IMAX continues to benefit from growing box office momentum throughout the world, with a strong slate of Hollywood and local language films ahead."

IMAX results were headlined by a strong performance in China, where "Tenet" earned $5.3 million in IMAX, delivering 18% of the Chinese box office despite accounting for only 1% of screens in the market. Even with continued capacity limitations, "Tenet" claimed IMAX's best three-day opening weekend ever in China for a Christopher Nolan film. Additionally, "Tenet" posted a better-than-expected $2.8 million in North America, despite an average capacity limitation of 35% and continued theatre closures in key markets including New York and Los Angeles.

In China, "Tenet" claimed the biggest three-day opening weekend ever for a Christopher Nolan film.  Additionally, "Tenet" topped the weekend opening (Fri.-Sun.) in IMAX of "Dunkirk" by 15% and "Interstellar" by 27%, despite continued capacity limitations.

An additional 31 IMAX screens in 3 markets will open "Tenet" this coming week, including Hong Kong, Israel and Qatar. Additional Domestic IMAX screens are anticipated, as more theatres open across the U.S.

John David Washington is the new Protagonist in Christopher Nolan's original sci-fi action spectacle "Tenet." Armed with only one word—Tenet—and fighting for the survival of the entire world, the Protagonist journeys through a twilight world of international espionage on a mission that will unfold in something beyond real time. Not time travel. Inversion.

Nolan designed "Tenet" with IMAX in mind – capturing the film with IMAX cameras, among the highest-resolution cameras in the world, and also refining the film throughout post-production in an IMAX theatre to further optimize how audiences will experience the film in IMAX. Exclusively in IMAX theatres, sequences shot with IMAX cameras will visually expand to fill the entire screen, allowing moviegoers to experience more of the image with unprecedented crispness and clarity. That combined with next generation IMAX precision sound, creates a truly immersive experience.

About IMAX Corporation
IMAX Corporation, an innovator in entertainment technology, combines proprietary software, architecture and equipment to create experiences that take you beyond the edge of your seat to a world you've never imagined. Top filmmakers and studios are utilizing IMAX theatres to connect with audiences in extraordinary ways, and, as such, IMAX's network is among the most important and successful theatrical distribution platforms for major event films around the globe.

IMAX Corporation is headquartered in New York, Toronto and Los Angeles, with additional offices in London, Dublin, Tokyo, and Shanghai. As of March 31, 2020, there were 1,616 IMAX theatre systems (1,526 commercial multiplexes, 14 commercial destinations, 76 institutional) operating in 81 countries and territories. On October 8, 2015, shares of IMAX China, a subsidiary of IMAX Corporation, began trading on the Hong Kong Stock Exchange under the stock code "1970."

IMAX®, IMAX® 3D, IMAX DMR®, Experience It In IMAX®, An IMAX 3D Experience®, The IMAX Experience®, IMAX Is Believing® and IMAX nXos® are trademarks of IMAX Corporation. More information about IMAX Corporation can be found at www.imax.com. You may also connect with IMAX on Facebook (www.facebook.com/imax), Twitter (www.twitter.com/imax) and YouTube (www.youtube.com/imaxmovies). 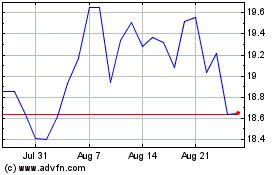 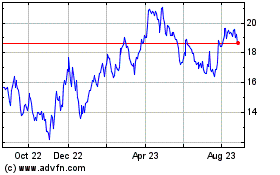 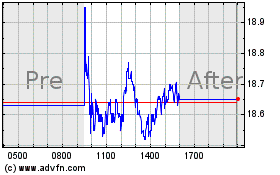