Subject to the terms and conditions of the Merger Agreement, at the effective time of the Merger (the “Effective Time”), if the Merger is completed, each share of common stock, par value $0.0001 per share (the “Shares”), of the Company issued and outstanding as of immediately prior to the Effective Time, other than (i) Shares held by Parent, Merger Sub, the Company or any of their respective subsidiaries immediately prior to the Effective Time and (ii) Shares owned by a holder who has properly demanded appraisal under Delaware law, will be automatically converted into the right to receive cash in an amount equal to $12.50, without interest (the “Merger Consideration”) and less any applicable withholding taxes.

The Company has made customary representations and warranties in the Merger Agreement and has agreed to customary covenants regarding the operation of the business of the Company and its subsidiaries prior to the consummation of the Merger. In addition, the Company has agreed not to initiate, solicit, knowingly facilitate or encourage (including by way of providing information) the making, submission or announcement of any inquiries, proposals or offers related to alternative acquisition proposals, subject to customary exceptions for the Company to respond to unsolicited proposals to the extent the Board determines in good faith that the failure to do so would be inconsistent with the fiduciary duties of the Board.

On February 8, 2021, the Company issued a press release announcing its entry into the Merger Agreement, a copy of which is attached as Exhibit 99.1.

On February 8, 2021, in connection with the promotion of Becky Ann Hughes into the role of the Company’s Senior Vice President, Growth during the Company’s annual executive performance and compensation review in the fourth quarter of 2019, the Company entered into a Change of Control Severance Agreement with Ms. Hughes (the “Severance Agreement”). Under the Severance Agreement, if Ms. Hughes’ employment with the Company is terminated without cause or as a result of an involuntary termination at any time within 12 months after a change of control of the Company, and Ms. Hughes delivers to the Company a signed general release of claims, then she will receive (i) six months of her then-current annual base salary, (ii) 50% of her target annual bonus for the calendar year in which the termination occurred, (iii) an additional 36 months of vesting with respect to each of her then-outstanding and not fully vested equity awards (with vesting of performance-based equity based upon target-level achievement) and (iv) up to six months of continuation coverage for her (and any of her eligible dependents) pursuant to the Consolidated Omnibus Budget Reconciliation Act of 1985. In addition, the Severance Agreement requires that any successor corporation to the Company must assume the Severance Agreement.

In addition, Ms. Hughes has executed the Company’s standard form of indemnification agreement, a copy of which has been filed as Exhibit 99.01 to Glu’s Form 8-K (File No. 001-33368) filed with the Securities and Exchange Commission on October 29, 2013.

A copy of the email is filed as Exhibit 99.3 hereto.

This communication contains “forward-looking” statements within the meaning of Section 27A of the Securities Act of 1933, as amended, and Section 21E of the Securities Exchange Act of 1934, as amended, that involve risks and uncertainties. In some cases, you can identify these forward-looking statements by the use of terms such as “expect,” “will,” “continue,” or similar expressions, and variations or negatives of these words, but the absence of these words does not mean that a statement is not forward-looking. All statements other than statements of historical fact are statements that could be deemed forward-looking statements, including, but not limited to: any statements regarding the expected timing of the completion of the Merger; the ability of Parent and the Company to complete the proposed Merger considering the various conditions to the Merger, some of which are outside the parties’ control, including those conditions related to regulatory approvals; any other statements of expectation or belief; and any statements of assumptions underlying any of the foregoing. A number of important factors and uncertainties could cause actual results or events to differ materially from those described in these forward-looking statements, including without limitation: the impact of the announcement of the merger on the Company’s and Parent’s respective businesses and operating results, including the effect of the announcement of the merger on the ability of the Company or Parent to retain and hire key personnel and maintain relationships with players, partners and others with whom the Company or Parent do business; the failure to satisfy any of the conditions to the consummation of the proposed Merger, including the adoption of the Merger Agreement by the Company’s stockholders and the receipt of certain governmental and regulatory approvals; the occurrence of any event, change or other circumstance that could give rise to the termination of the Merger Agreement; the outcome of any legal proceedings that may be instituted against the Company related to the Merger Agreement or the proposed transaction; unexpected costs, charges or expenses resulting from the proposed Merger; the occurrence of a Company Material Adverse Effect; and other risks that are described in the reports of the Company filed with the Securities and Exchange Commission (the “SEC”), including but not limited to the risks described in the Company’s Quarterly Report on Form 10-Q for its fiscal quarter ended September 30, 2020, and that are otherwise described or updated from time to time in other filings with the SEC. The Company assumes no obligation to update the information in this communication, except as otherwise required by law. Readers are cautioned not to place undue reliance on these forward-looking statements that speak only as of the date hereof.

Certain Information Regarding Participants in the Solicitation 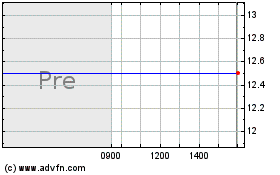