Under the settlement, I&M will reduce its base rates for Indiana residential customers by about 5% over two phases, with a slight decrease of about 1% in May 2022 and an additional, larger decrease in January 2023. At the same time, I&M will continue to increase its investments for enhancing reliability by upgrading aging infrastructure in Indiana. As part of I&M's Powering the Next plan, I&M will invest more than $350 million in reliability and grid resiliency improvements to the electric distribution system.

"Indiana Michigan Power constantly strives to serve customers with safe, reliable and affordable power," said Steve Baker, president and chief operating officer of I&M. "I&M's plan will pave the way for I&M's transition to renewable energy, enhance reliability and make our service more affordable. We are pleased to collaborate with the Indiana Office of Utility Consumer Counselor (OUCC) and a number of other groups to reach an agreement that best serves customers by lowering their base rates while supporting I&M's program to sustain and enhance service."

Although I&M originally requested an increase in rates, the company has the ability to decrease its base rates as a result of a separate settlement agreement reached in September, after the original rate case was filed. That agreement removes the Unit 2 portion of I&M's coal-fueled generation plant in Rockport from customer rates, beginning in January 2023.

I&M and nine stakeholder groups representing various customer interests agreed to the terms of the settlement agreement, which is subject to approval by the IURC.

Enhancing reliability with investment of more than $350 million

The settlement agreement preserves I&M's plans to enhance reliability of service to our customers by updating and replacing aging infrastructure. The rate agreement will support I&M's plans to continue strengthening the electric grid in Indiana to reduce the number and duration of power outages. Specific Indiana plans include:

These enhancements will build on projects approved in previous I&M rate reviews, which have resulted in reduced vegetation-related and equipment-related outages.

I&M will enhance the customers' experience by continuing to replace older-technology meters with new smart meters. Smart meters provide I&M insight into the distribution system to detect any issues or outages on the system and respond in a more efficient manner.

The new smart meters also enable customers to gain more control over their energy use by using the I&M website to monitor their energy usage.  I&M will also be rolling out a number of new optional programs that customers can choose from based on their individual preferences.

I&M will add new technology, including artificial intelligence, robotic process automations and other tools to enhance the reliability of the energy delivery system. More "self-healing" grid technology will be installed to detect power outages and automatically re-route electricity to customers, enabling I&M to respond quicker if an outage occurs and detect potential safety risks.

"The new rate agreement will help I&M continue to make progress toward building the grid of the future," Baker said. "The agreement is a win-win for our customers, empowering them to better control their costs and energy use while benefitting from investments to enhance reliability with a more resilient grid."

The plan will also support I&M's continued transition from coal-fueled generation to renewable energy sources by providing customers with cost savings associated with removing half of I&M's coal-fired generating capacity from customer rates. I&M is already a leader in green energy, building Indiana's first utility owned-and-operated solar farm. I&M now operates five solar farms in the two states we serve. The most recent, the St. Joseph Solar Farm, generates up to 20 megawatts of energy. Together, I&M's nuclear, solar, wind and hydro generation resulted in 85% of the energy I&M generated in 2020 being emission-free.

I&M expects to make announcements regarding its plans to continue to add renewable energy generation in the coming months.

The IURC is expected to conduct a hearing next month to review the settlement agreement, with a final ruling expected in 2022.

American Electric Power, based in Columbus, Ohio, is powering a cleaner, brighter energy future for its customers and communities. AEP's approximately 16,700 employees operate and maintain the nation's largest electricity transmission system and more than 224,000 miles of distribution lines to safely deliver reliable and affordable power to 5.5 million regulated customers in 11 states. AEP also is one of the nation's largest electricity producers with approximately 30,000 megawatts of diverse generating capacity, including more than 5,600 megawatts of renewable energy. The company's plans include growing its renewable 2 generation portfolio to approximately 50% of total capacity by 2030. AEP is on track to reach an 80% reduction in carbon dioxide emissions from 2000 levels by 2030 and has committed to achieving net zero by 2050. AEP is recognized consistently for its focus on sustainability, community engagement, and diversity, equity and inclusion. AEP's family of companies includes utilities AEP Ohio, AEP Texas, Appalachian Power (in Virginia and West Virginia), AEP Appalachian Power (in Tennessee), Indiana Michigan Power, Kentucky Power, Public Service Company of Oklahoma, and Southwestern Electric Power Company (in Arkansas, Louisiana, east Texas and the Texas Panhandle). AEP also owns AEP Energy, which provides innovative competitive energy solutions nationwide. For more information, visit aep.com.

News releases and other information about I&M are available at IndianaMichiganPower.com 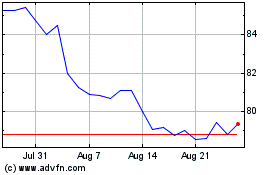 American Electric Power (NASDAQ:AEP)
Historical Stock Chart
From May 2021 to May 2022 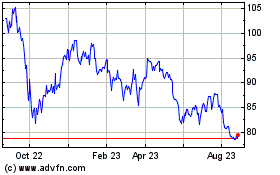 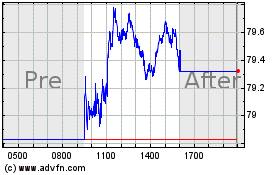