MONMOUTH JUNCTION, N.J., Jan. 24, 2022 /PRNewswire/ -- CytoSorbents Corporation (NASDAQ: CTSO), a leader in the treatment of life-threatening conditions in the intensive care unit and cardiac surgery using blood purification, highlights a new publication in the peer-reviewed journal, Annals of Thoracic and Cardiovascular Surgery, entitled "Hemoadsorption of Rivaroxaban and Ticagrelor during Acute Type A Aortic Dissection Operations." In this publication, Hassan et al. reported on the use of intraoperative hemoadsorption using CytoSorbents' technology to reduce perioperative bleeding complications in patients with acute type A aortic dissection, a life-threatening condition with a mortality rate of 1-2% per hour, who were either on the direct oral anticoagulant (DOAC) rivaroxaban (Xarelto®, Janssen and Bayer) or the antiplatelet drug ticagrelor (Brilinta®, AstraZeneca) at the time of urgent on-pump cardiac surgery.

Dr. Efthymios N. Deliargyris, Chief Medical Officer of CytoSorbents stated, "This new publication extends the evidence for clinical benefit with intraoperative antithrombotic removal using our hemoadsorption technology beyond coronary artery bypass grafting (CABG) and into additional complex cardiac operations, such as acute type A dissection aortic surgery.  All urgent cardiac surgeries are complex and carry high risk for complications, but as any cardiac surgeon will attest, operating in the presence of antithrombotic drugs such as ticagrelor or DOACs can result in significant bleeding complications which can negatively impact patient outcomes and increase costs."

Dr. Deliargyris concluded, "These encouraging data, though from a small single-center study, are consistent with the published literature on the use of our technology to reduce bleeding complications from cardiothoracic surgery in patients on antithrombotic drugs.  Furthermore, it validates our strategy to include patients undergoing urgent aortic surgery in both the STAR-T and STAR-D trials.  We plan to incorporate these new data in our recruiting and training efforts with study sites.  The U.S. STAR-T and STAR-D trials, evaluating the use of DrugSorb™‑ATR for intraoperative removal of antithrombotic drugs during urgent cardiothoracic surgery, are our top priorities.  We remain laser-focused and are dedicating all necessary resources to drive enrollment completion of these two studies in the next 12-18 months to support potential future FDA marketing approval."

About CytoSorbents Corporation (NASDAQ: CTSO)
CytoSorbents Corporation is a leader in the treatment of life-threatening conditions in intensive care and cardiac surgery using blood purification.  Its flagship product, CytoSorb®, is approved in the European Union with distribution in more than 70 countries around the world as an extracorporeal cytokine adsorber designed to reduce the "cytokine storm" or "cytokine release syndrome" seen in common critical illnesses that may result in massive inflammation, organ failure and patient death. These are conditions where the risk of death can be extremely high, yet few to no effective treatments exist.  CytoSorb is also being used during and after cardiothoracic surgery to remove inflammatory mediators that can lead to post-operative complications, including multiple organ failure.  More than 162,000 cumulative CytoSorb devices have been utilized to date.  CytoSorb was originally introduced into the European Union under CE-Mark as a first-in-kind cytokine adsorber.  Additional CE-Mark label expansions were received for the removal of bilirubin and myoglobin in clinical conditions such as liver disease and trauma, respectively, and both ticagrelor and rivaroxaban during cardiothoracic surgery.  CytoSorb has also received FDA Emergency Use Authorization in the United States for use in adult critically ill COVID-19 patients with imminent or confirmed respiratory failure. The DrugSorb™-ATR Antithrombotic Removal System, which is based on the same polymer technology as CytoSorb, has also been granted FDA Breakthrough Designation for the removal of ticagrelor, as well as FDA Breakthrough Designation for the removal of the direct oral anticoagulant (DOAC) drugs, apixaban and rivaroxaban, in a cardiopulmonary bypass circuit during urgent cardiothoracic surgery.  The Company has initiated two FDA approved pivotal trials designed to support U.S. marketing approval of DrugSorb-ATR. The first is the 120-patient, 20 center STAR-T (Safe and Timely Antithrombotic Removal-Ticagrelor) randomized, controlled trial evaluating the ability of intraoperative DrugSorb-ATR use to reduce perioperative bleeding risk in patients on ticagrelor undergoing cardiothoracic surgery. The second is the 120-patient, 25 center STAR‑D (Safe and Timely Antithrombotic Removal - Direct Oral Anticoagulants) randomized, controlled trial, evaluating the intraoperative use of DrugSorb–ATR to reduce perioperative bleeding risk in patients undergoing cardiothoracic surgery on direct oral anticoagulants, including apixaban and rivaroxaban.

CytoSorbents' purification technologies are based on biocompatible, highly porous polymer beads that can actively remove toxic substances from blood and other bodily fluids by pore capture and surface adsorption.  Its technologies have received non-dilutive grant, contract, and other funding of more than $39.5 million from DARPA, the U.S. Department of Health and Human Services (HHS), the National Institutes of Health (NIH), National Heart, Lung, and Blood Institute (NHLBI), the U.S. Army, the U.S. Air Force, U.S. Special Operations Command (SOCOM), Air Force Material Command (USAF/AFMC), and others.  The Company has numerous marketed products and products under development based upon this unique blood purification technology protected by many issued U.S. and international patents and registered trademarks, and multiple patent applications pending, including ECOS-300CY®, CytoSorb-XL™, HemoDefend-RBC™, HemoDefend-BGA™, VetResQ®, K+ontrol™, DrugSorb™, DrugSorb™-ATR, ContrastSorb, and others.  For more information, please visit the Company's websites at www.cytosorbents.com and www.cytosorb.com or follow us on Facebook and Twitter.

CytoSorbents (NASDAQ:CTSO)
Historical Stock Chart
From Apr 2022 to May 2022

CytoSorbents (NASDAQ:CTSO)
Historical Stock Chart
From May 2021 to May 2022 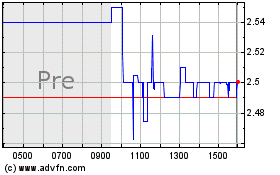