0.000014
0.00 (0.00%)
Real-Time
Market Open
0.000014
Ethereum Sees Surge In Number Of New Addresses – Will ETH Shine This October?
October 03 2022 - 10:46AM
NEWSBTC
The Ethereum Merge upgrade is expected to haul in more new users on the network which happens to be true with the surge of new active wallet addresses on the platform.  Ethereum’s new active wallet addresses climb to a new ATH of 3,001.804  ETH seen to spike in terms of social media engagements and mentions  ETH price up by 0.46% as of press time According to a Twitter post by Glassnode shared on October 2, the number of new active wallet addresses on the Ethereum network recently climbed to a new ATH of 3,001.804. While it’s true that this screams a boost in investor interest in the alt, the recent plunge in market volume and sentiment seems to be in contrast to everyone’s expectations to date. The number of new active wallet addresses on the Ethereum platform is seen to have dropped in August and recovered since September. Related Reading: Crypto Community Predicts Polygon (MATIC) To Rise Nearly 20% By October 31 Spike In Number Of ETH Addresses Trigger Increase In Social Metrics The increase in the number of wallet addresses also triggered a spike in social media engagement of the altcoin. Ethereum has shown a significant improvement of 4.63% surge in terms of social mentions and also 27.6% in social engagements. The Merge has created a lot of buzz on social media especially in the past month but the overall sentiment wasn’t purely positive. In fact, Ethereum is down in terms of weighted sentiment as seen in the last few days. In addition, ETH value has also been moving downwards as seen in the past couple of days. The altcoin volume has retreated from 13.45 billion on September 30 to only 6.03 billion on October 2. On the brighter side, even with the negative public sentiment, Ethereum still managed to attract more whale investors in the altcoin. Evidently, the top 500 ETH whales have gained interest in investing and buying the crypto. The momentum of Ethereum has shown some growth as seen in the past three days indicating an increase in wallet transactions involving Ether. Ethereum Development Activity Decreasing More so, the altcoin also gained the approval of Deutsche Telekom following their announcement of planning to roll out an Ethereum validator. On the other hand, the development activity on Ethereum has been spiraling down too which implies the decrease in activity on the GitHub. The current market state has however negatively impacted Ethereum as even the Merge failed to meet expectations in terms of capital outflow. Consequently, despite the growth in terms of wallet transactions and the rise in social media engagements, the price of ETH wasn’t able to keep up with the positive sentiment.  The coin is seen to recover a bit and is in the green lane as of publication. According to CoinMarketCap, ETH price has soared by 0.46% or trading at $1,304.30 as of this writing. Related Reading: Shiba Inu Fanbase Awaits Eternity Download Event – Will It Boost SHIB Price? The ETHUSD pair is trying to break past the $1,317 level on the daily chart | Source: TradingView.com Featured image from Top Trend Coins, chart from TradingView.com
SHIBA INU (COIN:SHIBUSD)
Historical Stock Chart
From Jan 2023 to Feb 2023 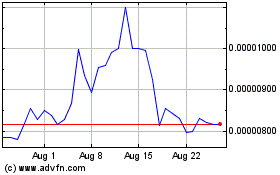 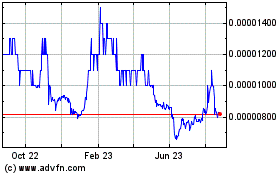 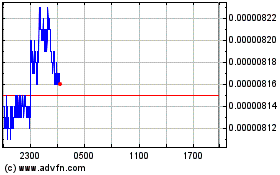