"Over the past year, Saxony has become an important jurisdiction for Excellon," stated Ben Pullinger, SVP Geology & Corporate Development. "We permitted the first drilling program for precious metals in modern times on the Bräunsdorf license, smoothly initiated the program, struck a major epithermal silver system over 12 kilometres, confirmed high-grade silver species and discovered high-grade silver veins. Based on our ongoing review of historical archives, we have added new licenses that cover additional areas of historical high-grade silver production with no modern exploration."

The three exploration licenses added to the Silver City Project are as follows:

Silver mining in this area has been documented as early as the 13th century. Records indicate significant production of silver ranging from the early 1700s until closure in 1884. Operations seldom exceeded 50 metres below surface. Recent analysis conducted by the MSAG (Mineral Systems Analysis Group, TU Freiberg and Helmholtz Institute Freiberg) confirmed silver grades up to multiple kilograms per tonne and significant gold values.

Production of silver on the Mohorn license dates back to the early 1700s with records indicating high grade silver production at up to 3,400 g/t Ag from 1770 to 1883, when the Erzengel Michael mine, the largest historical mine on the license, ceased production. Geophysical surveys conducted in the 1950s confirmed the continuity of these veins along strike and documented workings terminate at 150 metres below surface. Primary mining of lead and zinc continued until 1969 at Halsbrucke, with mining reaching up to 559 metres below surface and historical mineral reserves remaining at depth.

The Oederan license extends the Bräunsdorf trend southward and encompasses numerous poorly documented historical mines dating back to medieval times, the most significant of which was Hilfe Gottes, which ceased production in 1855. 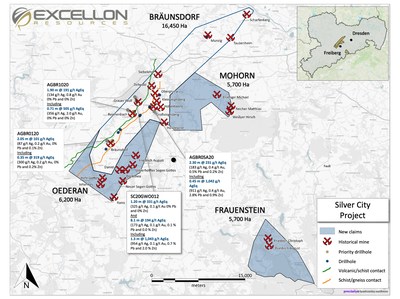 The Silver City District was mined for high-grade silver from the 11th until the late 19th century, when Germany left the silver standard in 1873 and the gold:silver ratio collapsed. Records from the project indicate high-grade silver production over substantial widths throughout the district. Excellon has embarked on the first modern day exploration program focused on precious metals, with high-grade silver intersections from the initial holes of the first program on the Bräunsdorf license including:

The Frauenstein, Mohorn and Oederan exploration licenses were granted to the Company following applications to the Sächsisches Oberbergamt (Saxon Mining Authority). Excellon also holds an option to acquire a 100% interest in the Bräunsdorf license on the Silver City Project from Globex Mining Enterprises Inc. (TSX: GMX) (OTCQX: GLBXF) and (FRA: G1MN).

Mr. Ben Pullinger, P.Geo., Senior Vice President Geology & Corporate Development, has acted as the Qualified Person, as defined in NI 43-101, with respect to the disclosure of the scientific and technical information contained in this press release.

Filing of Q4 and 2020 Financial Results

The Company expects to announce financial results for the three- and 12-month periods ending December 31, 2020 prior to market open on March 17, 2021.

Excellon's vision is to create wealth by realizing strategic opportunities through discipline and innovation for the benefit of our employees, communities and shareholders. The Company is advancing a precious metals growth pipeline that includes: Platosa, Mexico's highest-grade silver mine since production commenced in 2005; Kilgore, a high quality gold development project in Idaho with strong economics and significant growth and discovery potential; and an option on Silver City, a high-grade epithermal silver district in Saxony, Germany with 750 years of mining history and no modern exploration. The Company also aims to continue capitalizing on current market conditions by acquiring undervalued projects.

Forward-Looking Statements
The Toronto Stock Exchange has not reviewed and does not accept responsibility for the adequacy or accuracy of the content of this Press Release, which has been prepared by management. This press release contains forward-looking statements within the meaning of Section 27A of the Securities Act and Section 27E of the Exchange Act. Such statements include, without limitation, statements regarding mineral resources estimates, the future results of operations, performance and achievements of the Company, including potential property acquisitions, the timing, content, cost and results of proposed work programs, the discovery and delineation of mineral deposits/resources/reserves, geological interpretations, proposed production rates, potential mineral recovery processes and rates, business and financing plans, business trends and future operating revenues. Although the Company believes that such statements are reasonable, it can give no assurance that such expectations will prove to be correct. Forward-looking statements are typically identified by words such as: believe, expect, anticipate, intend, estimate, postulate and similar expressions, or are those, which, by their nature, refer to future events. The Company cautions investors that any forward-looking statements by the Company are not guarantees of future results or performance, and that actual results may differ materially from those in forward looking statements as a result of various factors, including, but not limited to, variations in the nature, quality and quantity of any mineral deposits that may be located, significant downward variations in the market price of any minerals produced, the Company's inability to obtain any necessary permits, consents or authorizations required for its activities, to produce minerals from its properties successfully or profitably, to continue its projected growth, to raise the necessary capital or to be fully able to implement its business strategies. All of the Company's public disclosure filings may be accessed via www.sedar.com and readers are urged to review these materials. This press release is not, and is not to be construed in any way as, an offer to buy or sell securities in the United States. 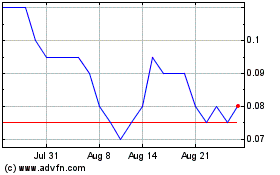 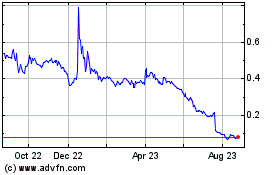 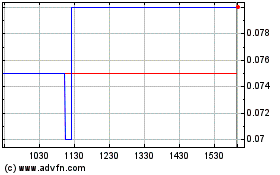