March 31, 2022
We are notifying you in accordance with the provisions of Article 28 of the Securities Market Law, Official Unified Text approved by Supreme Decree No. 093-2002-EF and the Regulation of Relevant Information Communication and Reserved Information, approved by Resolution SMV No. 005-2014-SMV/01. In this regard, we are pleased to inform the following:
In relation to the bonds convertible into common shares with voting rights of AENZA S.A.A. (hereinafter, "AENZA") that were issued on August 13, 2021 under the Indenture dated January 13, 2021 and its amending addenda (the "Indenture"), for US$ 89,970,000.00 (Eighty-Nine Million Nine Hundred Seventy Thousand and 00/100 United States Dollars) (hereinafter, the "Convertible Bonds"); holders of 78,970 Convertible Bonds, each for a par value of US$ 1,000. 00 (One Thousand and 00/100 United States Dollars) and for a principal amount equivalent to US$ 78,970,000.00 (Seventy-Eight Million Nine Hundred Seventy Thousand and 00/100 United States Dollars), have communicated the exercise of their conversion right within the terms set forth in the Indenture.
Thus, in accordance with the Indenture, the applicable "Conversion Date" is March 31, 2022, the date on which AENZA must convert all of the 78,970 bonds previously mentioned into common shares of the company, as well as pay the accrued interest to the bondholders who have exercised their conversion rights.
It should be noted that this conversion carried out on March 31, 2022, is additional to the one previously carried out on February 28, 2022, for 11,000 convertible bonds that were exchanged for common shares at the request of their holders, all of which was duly informed by AENZA by means of a Relevant Information Communication dated February 28, 2022.
As a consequence of the conversion of 78,970 Convertible Bonds into shares of AENZA, provisional certificates have been issued today for 287,261,051 new common shares of AENZA S.A.A., with a par value of S/1.00 each, with voting rights, which are fully subscribed and fully paid.
In this regard, AENZA's capital stock has increased by S/287,261,051.00 (Two Hundred Eighty-Seven Million Two Hundred Sixty-One Thousand and Fifty-One and 00/100 Soles), from S/909,718,928. 00 (Nine Hundred Nine Million Seven Hundred Eighteen Thousand Nine Hundred Twenty-eight and 00/100 Soles) to S/1,196,979,979.00 (One Billion One Hundred Ninety-Six Million Nine Hundred Seventy-Nine Thousand Nine Hundred Seventy-Nine and 00/100 Soles).
In view of the exercise of the conversion right by bondholders holding a total of 78,970 bonds, today AENZA has fully paid the accrued interest corresponding to such Convertible Bonds in the amount of S/ 807,248.90 (Eight Hundred and Seven Thousand Two Hundred and Forty-Eight and 90/100 Soles).
After the conversion of the Convertible Bonds referred to in this Relevant Information Communication and the conversion made on February 28, 2022 by holders of 11,000 Convertible Bonds, it is reported that all of the Convertible Bonds issued under the Indenture have been converted into common shares of AENZA, and therefore the Convertible Bonds have been fully cancelled.
On March 25, 2022, AENZA notified the holders of the Convertible Bonds and communicated as a Relevant Information Communication, the Notice of Mandatory Redemption for Indebtedness pursuant to paragraphs 4.22(a)(iv) and 4.22(d) of the Indenture.
However, all the holders of Convertible Notes have exercised the conversion right pursuant to clause 20.1 of the Indenture, which allowed them to send their communication exercising such right until the business day prior to a "Conversion Date" (in this case, the last business day of each month or March 31, 2022).
In this sense, no holder of Convertible Bonds has exercised the conversion right as a consequence of the Mandatory Redemption Notice due to Indebtedness, and has exercised the regular conversion procedure established in clause 20.1 of the Indenture; therefore, the payment of the repayment commission does not correspond.
Pursuant to the requirements of the Securities Exchange Act of 1934, the registrant has duly caused this report to be signed on its behalf by the undersigned, thereunto duly authorized.
AENZA S.A.A.
By: /s/ DANIEL URBINA PEREZ
Name: Daniel Urbina Perez
Title: Chief Legal Officer
Date: March 31, 2022
Aenza SAA (NYSE:AENZ)
Historical Stock Chart
From Jul 2022 to Aug 2022 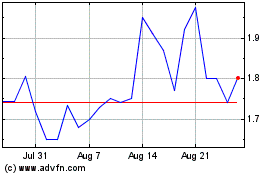 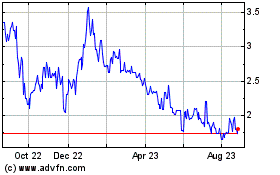 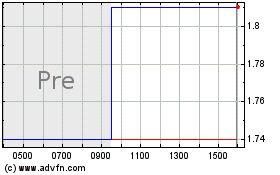