UNITED STATES
SECURITIES AND EXCHANGE COMMISSION
Washington, D.C. 20549
FORM 8-K
CURRENT REPORT
Pursuant to Section 13 OR 15(d) of The Securities Exchange Act of 1934
Date of Report (Date of earliest event reported): June 10, 2021
Tenax Therapeutics, Inc.
(Exact name of registrant as specified in its charter)
ONE Copley Parkway, Suite 490
Morrisville, NC 27560
(Address of principal executive offices) (Zip Code)
919-855-2100
(Registrant’s telephone number, including area code)
N/A
(Former name or former address, if changed since last report)
Check the appropriate box below if the Form 8-K filing is intended to simultaneously satisfy the filing obligation of the registrant under any of the following provisions:
⬜ Written communications pursuant to Rule 425 under the Securities Act (17 CFR 230.425)
⬜ Soliciting material pursuant to Rule 14a-12 under the Exchange Act (17 CFR 240.14a-12)
⬜ Pre-commencement communications pursuant to Rule 14d-2(b) under the Exchange Act (17 CFR 240.14d-2(b))
⬜ Pre-commencement communications pursuant to Rule 13e-4(c) under the Exchange Act (17 CFR 240.13e-4(c))
Securities registered pursuant to Section 12(b) of the Act:
Indicate by check mark whether the registrant is an emerging growth company as defined in Rule 405 of the Securities Act of 1933 (17 CFR 230.405) or Rule 12b-2 of the Securities Exchange Act of 1934 (17 CFR 240.12b-2).
Emerging growth company
⬜
If an emerging growth company, indicate by check mark if the registrant has elected not to use the extended transition period for complying with any new or revised financial accounting standards provided pursuant to Section 13(a) of the Exchange Act. ⬜
Item 5.07
Submission of Matters to a Vote of Security Holders.
Tenax Therapeutics, Inc. (the “Company”) held its Annual Meeting of Stockholders on June 10, 2021 (the “Annual Meeting”). The stockholders considered the four proposals described below, each of which is described in more detail in the Company’s definitive proxy statement dated April 30, 2021 (the “Proxy Statement”). As of April 13, 2021, the record date for the Annual Meeting, there were 14,969,312 shares of common stock issued, outstanding and entitled to vote. At the Annual Meeting, 12,427,891 shares of common stock were represented in person or by proxy, constituting a quorum. The final number of votes cast for and against, as well as the number of abstentions and broker non-votes, with respect to each proposal are set forth below.
Proposal 1: To elect the nine (9) director nominees described in the Proxy Statement to the Company’s Board of Directors to serve until the sooner of the 2022 Annual Meeting of the Company’s Stockholders or the election and qualification of their successors. The votes were cast as follows:
All director nominees were duly elected.
Proposal 2: Approval to convert shares of our Series B convertible preferred stock (“Series B Preferred Stock”), into shares of common stock. The votes were cast as follows:
(1) Represents votes cast on Proposal 2 as received by the Company. For the purpose of determining that Proposal 2 was approved pursuant to NASDAQ rules, 1,230,388 shares (representing the aggregate number of shares of common stock issued in connection with the Agreement and Plan of Merger dated January 15, 2021, by and among the Company, Life Newco II, Inc., PHPrecisionMed Inc., and Dr. Stuart Rich) that voted in favor of Proposal 2 were deemed to have abstained.
Proposal 2 was approved.
Proposal 3: Approval of Amendment No. 2 to our 2016 Stock Incentive Plan to increase the number of shares authorized for issuance under the plan by 750,000 shares.
Proposal 3 was approved.
Proposal 4: Ratification of the appointment of Cherry Bekaert LLP as our independent registered public accounting firm for the fiscal year ending December 31, 2021.
Proposal 4 was approved.
Item 8.01
Other Events
As previously reported on the Company’s Form 8-K as filed on January 19, 2021, the Company previously issued 10,232 shares of Series B Preferred Stock in connection with the Merger Agreement (as defined above). As a result of the approval of Proposal 2 as described above, and as further described in the Proxy Statement, all shares of Series B Preferred Stock were automatically converted into an aggregate of 10,232,000 shares of Common Stock. Of these newly issued shares of Common Stock, 1,212,489 shares are subject to automatic reduction to satisfy claims for indemnification under the Merger Agreement and to restrictions on transfer until January 15, 2023. On June 11, 2021, immediately following such conversion, the Company has 25,201,312 shares Common Stock outstanding.
SIGNATURES
Pursuant to the requirements of the Securities Exchange Act of 1934, the registrant has duly caused this report to be signed on its behalf by the undersigned hereunto duly authorized.
Tenax Therapeutics (NASDAQ:TENX)
Historical Stock Chart
From Sep 2021 to Oct 2021 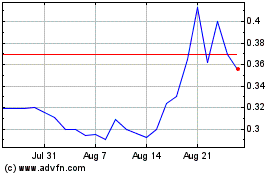 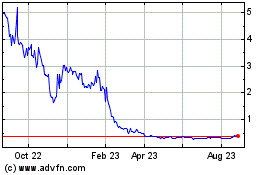 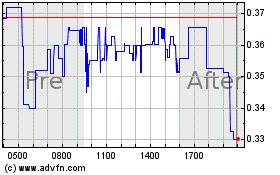