Mr. Mendal, 35, was recently appointed the Company’s President in November 2020 and served as the Company’s Chief Operating Officer from February 2019 to November 2020, and previously served as the Company’s Chief Revenue Officer from September 2017 to February 2019. Before joining the Company, Mr. Mendal served as the vice president of sales and marketing at PowerAdvocate, Inc., an energy intelligence company, from May 2017 to September 2017. Prior to that, Mr. Mendal served in multiple positions at PowerAdvocate, Inc., including manager of corporate strategy from August 2013 to August 2014, director of corporate strategy and marketing from August 2014 to December 2015 and senior director of sales and marketing from June 2015 to May 2017. From August 2007 to July 2010, he was a management consultant within the growth strategy division of Monitor Deloitte (formerly Monitor Group). Mr. Mendal holds a B.S. degree in finance and economics from Washington University in St. Louis and an M.B.A. degree from Harvard Business School. We believe that Mr. Mendal is qualified to serve on the Board due to his in-depth knowledge of our business from his service in our senior executive leadership and the perspective he will bring to the Board as our President and Chief Executive Officer.

There are no arrangements or understandings between Mr. Mendal and any other persons pursuant to which he was selected as a director. Mr. Mendal has no family relationships with any of the Company’s directors or executive officers, and there are no transactions and no proposed transactions between Mr. Mendal and the Company that would be required to be disclosed pursuant to Item 404(a) of Regulation S-K. Additionally, there have been no changes to Mr. Mendal’s compensatory plans or arrangements in connection with his appointment described herein.

A copy of the press release issued by the Company on November 29, 2020 announcing Mr. Mendal’s appointment as Chief Executive Officer and a director is filed with this Current Report on Form 8-K as Exhibit 99.1.

On November 29, 2020, the Company issued a press release announcing the death of its Chief Executive Officer, Seth Birnbaum, on November 28, 2020. A copy of the press release is filed with this Current Report on Form 8-K as Exhibit 99.1. 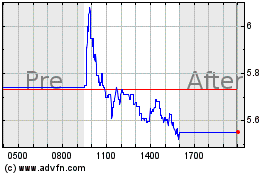