325.17
0.470 (0.14%)
Real-Time
Market Open
325.17
The Binance Vs. FTX War: Here Are The Most Recent Stats & On-Chain Data
November 08 2022 - 03:03AM
NEWSBTC
Is this the beginning of the end for FTX and Alameda Research? Or will both organizations come out stronger on the other side? As NewsBTC reported, Binance’s CZ smelled blood in the water and announced his exchange was selling their FTT reserves. That created a sort of a bank-run that left FTX in a dangerous position. Are both of the Sam Bankman-Fried-led organizations’ destinies tied to the FTT token? Or will they be fine even if it falls? In the most recent Bitcoin Magazine Pro report, they describe the current situation as, “a wave of panic taking shape that questions the solvency of both FTX and Alameda Research. As a result, we’ve seen nearly $1 billion in assets and token values fly out of known FTX and Alameda addresses over the last week.” Not only that, both FTT and BNB are falling. And Alameda and FTX are working overtime to keep FTT over $22. Related Reading: Ethereum Reserves Of FTX Collapse In The Midst Of Liquidity problems We’ll cover all of that and more, but first, let’s go to another BM Pro report in which they described the situation that led to all of this. A document detailing Alameda Research’s reserves leaked and the whole world learned that the firm held approximately 90% of the total FTT token supply. Their sister company, FTX, issues that coin. And that’s problematic. “It’s reported Alameda was holding $5.82 billion of FTT on June 30th, while the market cap of FTT at the time of the report was $4.2 billion. This is a result of some of their asset allocation being held in locked altcoins, which, similar to VC investments and employee stock compensation programs, has a locked/vesting period, only this time it’s using smart contracts. It should be noted that Alameda apparently applied a 50% haircut to all “locked” assets, but one could make the case that this is still generous accounting.” There are really interesting caveats in there. FTT price chart on FTX | Source: FTT/USD on TradingView.com FTX Is Down And Binance Is Up The bank run seems to be on. Wallets associated with FTX are moving funds like there’s no tomorrow. The exchange’s stablecoin balances “have been depleting at a rapid pace as customers move to get funds off the platform.” And that’s not their only worry, they also have to defend the $22 floor for FTT, but we’ll get to that. This is a zero-sum game, so someone has to be winning while FTX is losing. Back to the latest BM Pro report: “It’s a stark difference to see $451 million in stablecoins flow out of FTX over the last 7 days versus the $411 million that have flowed into Binance. That tells anyone in the market that the exchange giant (Binance), which already has approximately 60% of the volume in the entire space across both spot and derivatives markets, is out for blood and stands to gain during this FTX situation.” This all might seem like fun and games between two giants, but the reality is this: if FTX falls, the whole crypto market will tumble. And the contagion effect would probably be tremendous and take several companies and projects down with it. “There’s a broader risk to the market here as we see Alameda unwind many other positions across tokens and bitcoin that will be used to raise additional capital,” BM Pro wrote, “we’re just in the beginning stages on what may play out here. FTX stablecoin balance 7d: -$451mBinance stablecoin balance 7d: +$411m per @nansen_ai pic.twitter.com/cwlg29hugz — Alex Thorn (@intangiblecoins) November 7, 2022 The $22 Level Why is team Sam Bankman-Fried so determined to defend FTT’s $22 level? Alameda Research’s CEO, Caroline Ellison offered CZ, “if you’re looking to minimize the market impact on your FTT sales, Alameda will happily buy it all from you today at $22!” There’s that number again. Why are they so obsessed with it? According to BM Pro:  “Alameda would likely not have such a vested interest in defending this level if it was not leveraged. Otherwise, they would let the market fall as much as it wants and simply acquire FTT at a lower price.” Related Reading: Lightning Speed: Accelerators And Incubators Focus Their Sights On Bitcoin Is that undeniable proof that FTX and Alameda are leveraged and their destinies are tied to FTT? Not really. It suggests it, though. “The exchange rate differential between the FTT price on FTX vs. Binance has pushed to historic highs as Alameda and crew attempt to defend their token. Meanwhile, CZ and an army of speculators have begun to sell and go short FTT.”  Feels like I'm watching an emerging market central bank attempting to defend its currency against speculators right now. $FTT pic.twitter.com/hQc0Vh0ARe — Dylan LeClair 🟠 (@DylanLeClair_) November 7, 2022 We might be witnessing “a classic speculative attack unfold,” says BM Pro. However, they feel it’s even deeper. “There is a much more important battle going on, and the FTT exchange rate is a matter of solvency for Alameda.” According to analyst Dylan LeClair, the whole situation “feels like I’m watching an emerging market central bank attempting to defend its currency against speculators.” The question is, can they? Featured Image by DeSa81 from Pixabay | Charts by TradingView
Binance Coin (COIN:BNBUSD)
Historical Stock Chart
From Jan 2023 to Feb 2023 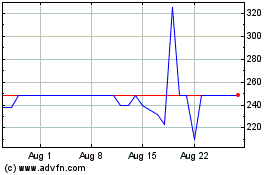 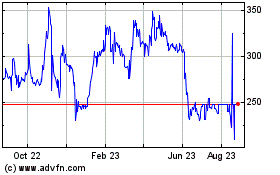 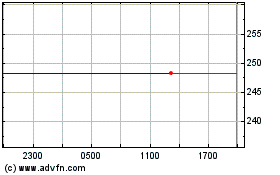