Gold Reserve Inc.
(Exact name of registrant as specified in its charter)

Indicate by check mark if the registrant is submitting the Form 6-K in paper as permitted by
Regulation S-T Rule 101(b)(1): ¨

Indicate by check mark if the registrant is submitting the Form 6-K in paper as permitted by
Regulation S-T Rule 101(b)(7): ¨

If “Yes” is marked, indicate below the file number assigned to the registrant in connection with Rule 12g3-2(b):

This Report on Form 6-K and the exhibits attached hereto are hereby incorporated by reference into Gold Reserve Inc.’s (the “Company”) current Registration Statements on Form F-3 and Form S-8 on file with the U.S. Securities and Exchange Commission (the “SEC”).

The following exhibits are furnished with this Form 6-K:

Forward-looking statements are necessarily based upon a number of estimates and assumptions that, while considered reasonable by us at this time, are inherently subject to significant business, economic and competitive uncertainties and contingencies that may cause our actual financial results, performance or achievements to be materially different from those expressed or implied herein, many of which are outside our control.

Numerous factors could cause actual results to differ materially from those described in the forward-looking statements, including, without limitation:

●        risks associated with sanctions imposed by the U.S. and Canadian governments targeting the Bolivarian Republic of Venezuela ("Venezuela") (the "Sanctions"):

-         Sanctions imposed by the U.S. government generally block all property of the government of Venezuela and prohibits the Company and its U.S. directors, management and employees from dealing with the Venezuelan government and state-owned/controlled entities, entering into certain transactions or dealing with Specially Designated Nationals ("SDNs") and targets corruption in, among other identified sectors, the gold sector of the Venezuelan economy,

-         the Sanctions are expected to continue to adversely impact our ability to receive the remaining funds owed by Venezuela and our ability to finance, develop and operate the Siembra Minera Project;

●        risks that U.S. and Canadian government agencies that enforce Sanctions may not issue licenses that the Company may request in the future to engage in certain Venezuela-related transactions;

●        risks associated with the Company's inability to access amounts held in the trust account (the "Trust Account") for the benefit of the Company at Banco de Desarrollo Económico y Social de Venezuela ("Bandes Bank")  which have been blocked as a result of the U.S. Treasury Department's Office of Foreign Assets Control designation of Bandes Bank as a SDN pursuant to an Executive Order;

●        risks associated with the continued failure by Venezuela to honor its commitments under the Settlement Agreement whereby Venezuela agreed to pay us the Award (as defined below) (including interest) and purchase our technical mining data associated with our previous Brisas Project (the "Mining Data") for approximately $1.032 billion in a series of monthly payments ending on or before June 15, 2019 (the "Settlement Agreement");

●        risks associated with the existence of "dual" governments in Venezuela as a result of certain non-Venezuelan countries (including the United States and Canada) recognizing a temporary presidency and government with respect to the president of the Venezuela National Assembly (“National Assembly”), Juan Guaidó, instead of Nicolás Maduro (and vice versa), including associated challenges as to governing and decision-making authority related thereto, and the U.S. Government's recent indictment of Venezuelan President Nicolás Maduro and a number of key associates for drug trafficking;

●        risks associated with the collection of a September 2014 arbitral award granted pursuant to the Additional Facility Rules of the International Centre for the Settlement of Investment Disputes (the "Award") and substantial concentration of our operations and assets in Venezuela which are and will continue to be subject to risks specific to Venezuela, including the effects of political, economic and social developments, social instability and unrest; international response to Venezuelan domestic and international policies; Sanctions by the U.S. or Canadian governments or other jurisdictions and potential invalidation, confiscation, expropriation or rescission of governmental orders, permits, agreements or property rights either by the existing or a future administration or power, de jure or de facto;

●        risks that any future Venezuelan administration or power, de jure or de facto, will fail to respect the agreements of the prior administration, including recent or future actions of the opposition controlled National Assembly challenging the Maduro administration's 2016 formation of Siembra Minera and Presidential Decree 2,248 creating the Strategic Development Zone National Mining Arch of the Orinoco;

●        risks associated with our ability to resume our efforts to enforce and collect the Award, including the associated costs of enforcement and collection efforts and the timing and success of that effort, if Venezuela fails to honor its commitments pursuant to the Settlement Agreement, it is terminated and further efforts related to the Settlement Agreement are abandoned;

●        the risk that the conclusions of management and its qualified consultants contained in the Preliminary Economic Assessment of the Siembra Minera Gold Copper Project in accordance with Canadian National Instrument 43-101- Standards of Disclosure for Mineral Projects ("NI 43-101") may not be realized in the future;

●        risks associated with our ability to service outstanding obligations as they come due and access future additional funding, when required, for ongoing liquidity and capital resources, pending the receipt of payments under the Settlement Agreement or collection of the Award in the courts;

●        risks associated with our prospects in general for the identification, exploration and development of mining projects and other risks normally incident to the exploration, development and operation of mining properties, including our ability to achieve revenue producing operations in the future;

●        risks that estimates and/or assumptions required to be made by management in the course of preparing our financial statements are determined to be inaccurate, resulting in a negative impact on the reported amounts of assets and liabilities, disclosure of contingent assets and liabilities at the date of the financial statements and the reported amounts of revenues and expenses during the reporting period;

●        risks associated with shareholder dilution resulting from the future sale of additional equity, if required;

●        risks associated with the value realized, if any, from the disposition of the assets related to our previous mining project in Venezuela known as the "Brisas Project";

●        risks associated with the abilities of and continued participation by certain employees;

●        risks associated with the impact of current or future U.S., Canadian and/or other jurisdiction's tax laws to which we are or may be subject; and

●        risks associated with the impact of new diseases, epidemics and pandemics, including the effects and potential effects of the global coronavirus disease 2019 (COVID-19) pandemic.

See “Risk Factors” contained in our Annual Information Form and Annual Report on Form 40-F filed on www.sedar.com and www.sec.gov, respectively for additional risk factors that could cause results to differ materially from forward-looking statements.

Investors are cautioned not to put undue reliance on forward-looking statements, and investors should not infer that there has been no change in our affairs since the date of this report that would warrant any modification of any forward-looking statement made in this document, other documents periodically filed with the U.S. Securities and Exchange Commission (the "SEC"), the Ontario Securities Commission (the "OSC") or other securities regulators or presented on the Company's website.  Forward-looking statements speak only as of the date made.  All subsequent written and oral forward-looking statements attributable to us or persons acting on our behalf are expressly qualified in their entirety by this notice.  We disclaim any intent or obligation to update publicly or otherwise revise any forward-looking statements or the foregoing list of assumptions or factors, whether as a result of new information, future events or otherwise, subject to our disclosure obligations under applicable U.S. and Canadian securities regulations.  Investors are urged to read the Company's filings with U.S. and Canadian securities regulatory agencies, which can be viewed online at www.sec.gov and www.sedar.com, respectively. The forward-looking information contained herein is presented for the purpose of assisting investors in understanding the Company’s expected financial and operational performance and results as at and for the periods ended on the dates presented in the Company’s plans and objectives and may not be appropriate for other purposes.

By: /s/ Robert A. McGuinness

Robert A. McGuinness, its Vice President of Finance,

Chief Financial Officer and its Principal Financial and Accounting Officer 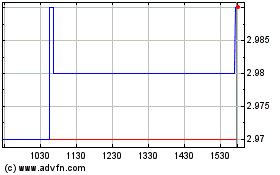