Securities registered pursuant to Section 12(b) of the Act:
Indicate by check mark whether the registrant is an emerging growth company as defined in Rule 405 of the Securities Act of 1933 (§230.405 of this chapter) or Rule 12b-2 of the Securities Exchange Act of 1934 (§240.12b-2 of this chapter).
Emerging growth company ☐
If an emerging growth company, indicate by check mark if the registrant has elected not to use the extended transition period for complying with any new or revised financial accounting standards provided pursuant to Section 13(a) of the Exchange Act. ☐
On April 12, 2021 SunPower Corporation (the “Company”) and Kenneth L. Mahaffey, Executive Vice President, General Counsel and Chief Compliance Officer of the Company, agreed that he will transition out of the Company in the next month. Mr. Mahaffey will continue to serve as an advisor to facilitate the transition, and his last day with the Company is expected to be May 14, 2021.
Regan J. MacPherson will succeed Mr. Mahaffey as the Company’s Executive Vice President and Chief Legal Officer, effective April 19, 2021. Ms. MacPherson, who is 57 years old, most recently served as Chief Legal and Compliance Officer of Quantum Corporation, a company specializing in the storage and management of digital video and other forms of unstructured data, from October 2019 to April 2021. Prior to joining Quantum, she was the Vice President and Chief Compliance Officer at Marvell Semiconductor, Inc. from June 2017 to October 2019. Ms. MacPherson served as Senior Vice President and General Counsel of Seagate Technology, PLC from March 2016 to June 2017. Ms. MacPherson also served as Vice President and Interim General Counsel from August 2015 to March 2016, Deputy General Counsel from September 2013 to August 2015, in addition to varying roles of increasing responsibility from July 2005 to September 2013, at Seagate Technology plc. Ms. MacPherson holds a Juris Doctor from Southwestern Law School and a Bachelor of Arts in political science from San Francisco State University.
There are no arrangements or understandings between Ms. MacPherson and any other persons pursuant to which she was named to this position with the Company. Ms. MacPherson does not have any family relationship with any of the Company’s directors or executive officers or any persons nominated or chosen by the Company to be a director or executive officer. Ms. MacPherson has no direct or indirect material interest in any transaction or proposed transaction required to be reported under Section 404(a) of Regulation S-K or Item 5.02(c) of Form 8-K.
In connection with Ms. MacPherson’s appointment, she will enter into an employment agreement and an indemnification agreement with the Company and will participate in the Company’s executive incentive plans, including the SunPower Corporation 2015 Omnibus Incentive Plan, Executive Performance Bonus Plan, and 2019 Management Career Transition Plan, each substantially in the form previously disclosed by the Company.
On April 12, 2021, the Company issued a press release, included as Exhibit 99.1 hereto, announcing Ms. MacPherson’s appointment and Mr. Mahaffey’s planned departure.
The information furnished in Item 7.01 and Item 9.01 of this Current Report on Form 8-K and Exhibit 99.1 hereto shall not be deemed “filed” for purposes of Section 18 of the Securities Exchange Act of 1934 (the “Exchange Act”) or otherwise subject to the liabilities of that section, nor shall it be deemed incorporated by reference in any filing under the Securities Act of 1933 or the Exchange Act, except as expressly set forth by specific reference in such filing.
(d) Exhibits.
SIGNATURE
Pursuant to the requirements of the Securities Exchange Act of 1934, the Registrant has duly caused this report to be signed on its behalf by the undersigned hereunto duly authorized. 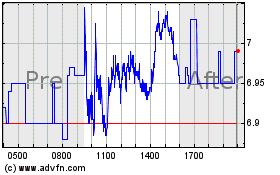