Mr. Wade, age 71, has spent 40 years advising senior management and boards of directors on more than 200 business strategy, acquisition, divestiture and restructuring projects.  Since 2007, Mr. Wade has been a Partner in Residence with Catalyst Acquisition Group, an investment firm focusing on the acquisition and restructuring of distressed companies in the United States and internationally. Since 2007, Mr. Wade also has been Chairman and Chief Executive Officer of Broadcaster, Inc., a company engaged in the internet service provider and applications businesses; since July 2019, Mr. Wade has been Chairman and Chief Executive Officer of VITA Mobile Systems, Inc. (OTC:VMSI), a technology company focusing on digital imaging in mobile devices, collection of big data and development of artificial intelligence; since September 2019, Mr. Wade has been Chairman and Chief Executive Officer of Madice.com., an ecommerce distributor of hemp-based CBD products; since October 2020, Mr. Wade has been Chairman and Chief Executive Officer of FOX Automotive USA, Inc., an electric vehicle manufacturer; and from August 2017 to January 2019, Mr. Wade was interim Chief Executive Officer of Payless Shoesource, Inc., a discount footwear retailer. Payless Shoesource, Inc. filed for Chapter 11 bankruptcy protection in February 2019. Since 2010, Mr. Wade has also been a director of MNG Enterprises, Inc., a company that owns media properties such as The Denver Post, San Jose Mercury News, Orange County Register and the Boston Herald. In addition, since October 2020, Mr. Wade has been a director of Oyster Enterprises Acquisition Corp. (NASDAQ: OSTRU), a special purpose acquisition company.  From 2001 to August 2020, Mr. Wade was a director of Pyxus International, Inc., formerly known as Alliance One International, LLC. (OTC: PYYX), an international leaf tobacco storage, sales and distribution company that filed for Chapter 11 bankruptcy protection in June 2020. Mr. Wade’s career includes holding senior-level positions with investment banking firms, including Lehman Brothers and Salomon Brothers, and serving as National Head of Investment Banking at Price Waterhouse LLP. Mr. Wade graduated from West Virginia University in 1971 with a B.S. in Business Administration and was commissioned as a 2nd Lt. in the U.S. Air Force. In 1975, Mr. Wade was honorably discharged from the USAF holding the rank of Captain. Mr. Wade also received an MBA degree from the University of Wyoming in 1975.

Pursuant to the terms of an Employment Agreement, dated as of February 19, 2021 (the “Employment Agreement”), between the Company and Mr. Wade, Mr. Wade will receive (i) an annual base salary of $225,000; (ii) an initial option grant of ten-year options to purchase 150,000 shares of the Company’s common stock for a purchase price of $4.70 per share, which options will vest on February 20, 2022; and (iii) the right to participate in all benefit plans offered to the Company’s senior executive officers.

There are no family relationships between Mr. Wade and any director or other executive officer of the Company, nor are there any transactions to which the Company was or is a participant and in which Mr. Wade has a material interest subject to disclosure under Item 404(a) of Regulation S-K. There are no arrangements or understandings between Mr. Wade and any other person pursuant to which he was selected as an officer of the Company.

Mr. Mihelich’s decision to resign as Chief Financial Officer was not related to any disagreements with the Company on any matter relating to its operations, policies or practices or any issues regarding financial disclosures, accounting or legal matters.

On February 23, 2021, we issued a press release announcing the appointment of Mr. Wade as Chief Financial Officer and the departure of Mr. Mihelich. A copy of the press release is attached as Exhibits 99.1 to this Current Report on Form 8-K and is incorporated by reference herein.

The information under this Item 8.01, including Exhibit 99.1, is deemed “furnished” and not “filed” under Section 18 of the Securities Exchange Act of 1934, as amended (the “Exchange Act”), or otherwise subject to the liability of that section, and shall not be incorporated by reference into any registration statement or other document filed under the Securities Act of 1933, as amended, or the Exchange Act except as shall be expressly set forth by specific reference in such filing. 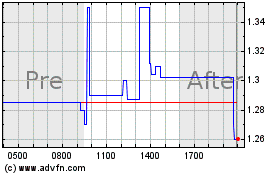