The closings of the First Tranche and the Second Tranche are conditioned upon certain closing conditions. The Note Purchase Agreement also contains certain representations, warranties and covenants of the Company, including with regard to the incurrence of indebtedness and liens, making of investments, dispositions of property and transactions with affiliates.

The Company is permitted to use the proceeds from the sale of the Notes as working capital, to fund its general business requirements and to pay off existing indebtedness.

The Notes will be senior, secured obligations of the Company, bearing interest at a rate of 12.00% per annum, payable quarterly in arrears on the first calendar day of each calendar quarter commencing on July 1, 2022. Immediately upon the occurrence and during the continuance of an event of default, the interest rate will be increased by an additional 12.00%. Other than on the Maturity Date (as defined below) or any optional redemption date, accrued interest shall be paid in-kind.

The Company may, at its option, repay all (but not a portion) of the Notes outstanding upon three business days’ prior written notice at a price equal to the Repayment Value of the Notes outstanding. The Repayment Value of any Note on any applicable date means an amount payable such that the annualized return on the initial principal amount of the Notes is no less than 12.00%, or, if greater, an amount equal to 150% of the initial principal amount of such Note.

The Notes will mature and be due in cash at the Repayment Value on the one-year anniversary of the First Tranche Closing Date, subject to earlier conversion, redemption or repurchase in accordance with their terms (the “Maturity Date”).

In connection with the Financing, the Company has agreed to consummate a rights offering (the “Rights Offering”) for an aggregate of 375 million shares of Common Stock to the Company’s stockholders as of a record date to be determined at an offering price of $0.50 per share of Common Stock. The Rights Offering is expected to be conducted as soon as practicable following the First Tranche Closing and in any event within 180 days thereafter.

Nothing in the Note Purchase Agreement prohibits the Company from refinancing the Notes (at their Repayment Value) with a new equity or debt financing, or from selling the Company (and repaying the Notes at the Repayment Value in connection with such sale). The Company expects that in the event it enters into a sale transaction, then it would not proceed with the Rights Offering.

Pursuant to the Note Purchase Agreement, the Company and each of its subsidiaries has granted a first-priority security interest on substantially all of its assets, including intellectual property. Any subsidiary of the Company formed or acquired is also required to become party to the Note Purchase Agreement, subject to the same requirements. Upon the occurrence of an event of default, the Administrative Agent, on behalf of the Noteholders, is entitled to, among other things, foreclose on the collateral.

In connection with the Financing, the Company has agreed to hold a meeting of its stockholders within 120 days of the First Tranche Closing (the “Stockholders Meeting”) to obtain stockholder approval to (i) increase the number of authorized shares of Common Stock under the Company’s certificate of incorporation to an amount necessary to consummate the Rights Offering and (ii) issue the full potential amount of the Conversion Shares pursuant to the rules of The Nasdaq Stock Market LLC.

Prior to the Maturity Date (unless an event of default has occurred and is continuing), the Investor Parties (as defined below) may not transfer any of the Notes to any person without the consent of the Company, except each Noteholder may transfer the Notes (i) to its direct or indirect limited partners or other investors, in each case, to which Notes are transferred by way of distribution, or the Noteholders’ affiliated funds or controlled affiliates (such controlled affiliates, limited partners and other investors that hold the Notes or Conversion Shares, collectively, the “Permitted Transferees”), (ii) in connection with customary pledges in connection with financing arrangements by the Noteholders or to the extent that all of the net proceeds of such sale are solely used to satisfy a margin call (i.e. posted as collateral) or re-pay bona fide loan or lending transaction entered into by the Noteholders (a “Financing Arrangement”) to the extent necessary to satisfy a bona fide margin call on such Financing Arrangement or to avoid a bona fide margin call on such Financing Arrangement that is reasonably likely to occur; provided, that, in each such Financing Arrangement, the lender has executed an issuer agreement, or (iii) following the date the Company commences a voluntary case under Title 11 of the United States Bankruptcy Code or any other similar insolvency laws. The Noteholders and any transferee, whether during or after such three-year period, pursuant to clause (i) is an “Investor Party” and any transferee pursuant to clauses (ii) and (iii) above is an “Other Holder”.

In connection with any transfer of the Notes that is effected pursuant to a transaction in which the Investor Parties (or any of their representatives) negotiate the terms of such transfer directly with the third party purchaser (other than any underwriter, dealer (including a dealer acting as a block positioner), market maker, placement agent or initial purchaser thereof), at no time may the Investor Parties and Other Holders, as applicable, knowingly (after reasonable inquiry) transfer any Notes to any Company Competitor, or any Activist Investor (each as defined in the Investors’ Rights Agreement) or person who the Investor Party or Other Holder, as applicable, reasonably should know has been an Activist Investor in the last three years. In no event shall the foregoing limitations apply to, or limit in any way, sales by the Investor Parties in transactions effected on any stock exchange.

For so long as the Investor Parties have the right to designate an Observer or designate or nominate a director to the Board (or any person so designated or nominated continues to serve on the Board), the Investor Parties or Other Holders, as applicable, have agreed at each meeting of the stockholders to vote all shares of Common Stock owned (a) in favor of each director nominated or recommended by the Board and against the removal of any director who has been elected following nomination or recommendation by the Board, (b) against any stockholder nomination for a director that is not approved and recommended by the Board, (c) in favor of the Company’s “say-on-pay” proposal and any proposal by the Company relating to equity compensation that has been approved by the Board or the Board’s Compensation Committee, and (d) in favor of the Company’s proposal for ratification of the appointment of the Company’s independent registered public accounting firm. The foregoing voting agreement will terminate if, following any conversion in connection with the Rights Offering described below, the Investor acquires control of a majority of the voting power of the Company.

Financial Statements and Other Information Rights

The information in Item 1.01 of this Current Report on Form 8-K (this “Report”) is incorporated by reference herein.

The information in Item 1.01 of this Report is incorporated by reference herein.

A copy of the press release announcing the Financing and related matters is attached hereto as Exhibit 99.1 and is incorporated herein by reference.

The information contained in this Item 7.01, including Exhibit 99.1, is furnished herewith and shall not be deemed “filed” for purposes of Section 18 of the Securities and Exchange Act of 1934, as amended (the “Exchange Act”), or otherwise subject to the liabilities of that section, and such information shall not be deemed to be incorporated by reference into any of the Company’s filings under the Securities Act or the Exchange Act, except as shall be expressly set forth by specific reference in such filing. 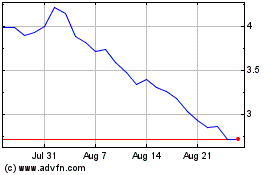 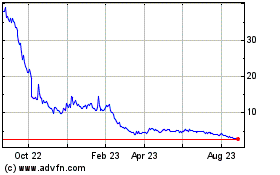 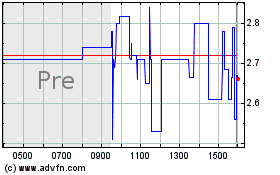