44.66
0.00 (0.0%)
Upgrade to Real-Time
Premarket
44.66
Current Report Filing (8-k)
July 01 2021 - 04:19PM
Edgar (US Regulatory)
0000884614false00008846142021-07-012021-07-01
UNITED STATES
SECURITIES AND EXCHANGE COMMISSION
WASHINGTON, D.C. 20549
FORM 8-K
CURRENT REPORT
Pursuant to Section 13 or 15(d)
of The Securities Exchange Act of 1934
Date of Report (Date of earliest event reported): July 1, 2021
UGI Corporation
(Exact Name of Registrant as Specified in Charter)
460 North Gulph Road, King of Prussia, PA 19406
(Address of Principal Executive Offices) (Zip Code)
Registrant’s Telephone Number, Including Area Code: 610 337-7000
Not Applicable
Former Name or Former Address, if Changed Since Last Report
Check the appropriate box below if the Form 8-K filing is intended to simultaneously satisfy the filing obligation of the registrant under any of the following provisions:
Securities registered pursuant to Section 12(b) of the Act:
Indicate by check mark whether the registrant is an emerging growth company as defined in Rule 405 of the Securities Act of 1933 (17 CFR §230.405 of this chapter) or Rule 12b-2 of the Securities Exchange Act of 1934 (17 CFR §240.12b of this chapter).
If an emerging growth company, indicate by check mark if the registrant has elected not to use the extended transition period for complying with any new or revised financial accounting standards provided pursuant to Section 13(a) of the Exchange Act.  ☐
Item 5.02 Departure of Directors or Certain Officers; Election of Directors; Appointment of Certain Officers; Compensatory Arrangements of Certain Officers.
On July 1, 2021, UGI Corporation (the “Company”) announced that it had named Jean Felix Tematio Dontsop, age 45, to serve as Vice President, Chief Accounting Officer and Controller of the Company, effective July 19, 2021.
Mr. Tematio Dontsop most recently served as Vice President of Internal Audit for West Pharmaceuticals Services, Inc. in Exton, Pennsylvania from July 2020 to June 2021. Previously, he held several roles of increasing responsibility over fifteen years with PricewaterhouseCoopers (“PwC”), based in Philadelphia, Pennsylvania and Paris, France, including Audit Director from 2019 to 2020 and Audit Senior Manager from 2011 to 2019. A native of Cameroon, Mr. Tematio Dontsop also worked earlier in his career as an auditor for KPMG, based in Paris. Mr. Tematio Dontsop holds a Master’s in Finance from Reims Management School, France and is a Certified Public Accountant.
Mr. Tematio Dontsop will participate in the Company’s annual bonus plan and its long-term compensation plan, the UGI Corporation 2021 Incentive Award Plan (the "2021 Plan"). In addition, Mr. Tematio Dontsop will participate in the Company’s benefit plans, including the Company’s 2009 Supplemental Executive Retirement Plan for New Employees (the "SERP") and the Company’s Senior Executive Employee Severance Plan (the "Severance Plan"). Additionally, pursuant to a change in control agreement, the Company will provide Mr. Tematio Dontsop with cash benefits ("Benefits") if the Company terminates his employment without cause or if he terminates employment for good reason at any time within two years following a change in control of the Company. If the events trigger a payment following a change in control, the Benefits payable to Mr. Tematio Dontsop will be as specified under his change in control agreement unless payments under the Severance Plan would be greater, in which case Benefits would be provided under the Severance Plan. Benefits under the change in control agreement will be equal to two times his base salary plus annual bonus. Mr. Tematio Dontsop will also receive the cash equivalent of his target bonus, prorated for the number of months served in the fiscal year. The impact of a change in control on outstanding performance units, distribution equivalents, and unvested stock options will be as set forth in the applicable plan and/or grant letter. In the event of the termination of Mr. Tematio Dontsop's employment following a change in control, he would also receive benefits under the SERP calculated as if he had continued in employment for two years. Descriptions of the Company’s change in control agreements, SERP, and Severance Plan are included in the Company’s definitive proxy statement with respect to the Company’s 2021 Annual Meeting of Shareholders.
In order to receive benefits under the Severance Plan or his change in control agreement, Mr. Tematio Dontsop is required to execute a release that discharges the Company and its subsidiaries from liability for any claims he may have against any of them, other than claims for amounts or benefits due him under any plan, program or contract provided by or entered into with the Company or its subsidiaries. The Severance Plan also requires Mr. Tematio Dontsop to ratify any post-employment activities agreement in effect and to cooperate in attending to matters pending at the time of termination of employment.
In addition to the benefits set forth above, Company paid life and disability insurance are generally available to all employees. Mr. Tematio Dontsop is also eligible for certain executive perquisites, consistent with such perquisites available to the Company’s other executives.
A copy of the Company’s press release is included as Exhibit 99.1 to this Current Report on Form 8-K and is incorporated herein by reference.
Item 9.01 Financial Statements and Exhibits.
SIGNATURES
Pursuant to the requirements of the Securities Exchange Act of 1934, the registrant has duly caused this report to be signed on its behalf by the undersigned hereunto duly authorized.
UGI (NYSE:UGI)
Historical Stock Chart
From Sep 2021 to Oct 2021 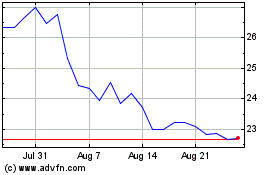 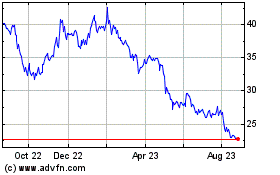 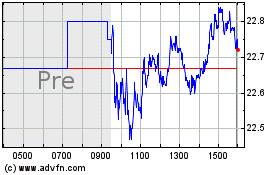