ING announced today that Tanate Phutrakul will succeed Koos Timmermans as CFO of ING. As announced on 11 September 2018, in consultation with the Supervisory Board, Koos Timmermans will step down from his position as chief financial officer and member of the Executive Board of ING Group and will leave the company.

In order to ensure an orderly transition Tanate Phutrakul will succeed Koos Timmermans, being appointed as CFO and member of the Management Board Banking on 7 February 2019, after the presentation of the 2018 fourth quarter and full year results, which is scheduled for 6 February 2019. The Supervisory Board will nominate Tanate Phutrakul for appointment as a member of the Executive Board of ING Group at the Annual General Meeting in April 2019. The appointments have been approved by the European Central Bank.

Tanate Phutrakul (Thai, 1965) is currently ING Group Controller. He first joined ING in 1998 as managing director of ING Barings Securities Thailand. From 2003 until 2008 he served as head of Wholesale Banking and chief financial officer of TMB Bank in Thailand. In 2008 he rejoined ING to become CFO of the Operations and IT unit and later of Retail Banking International. In 2015 he took up the position of CFO of ING in Belgium, a role he held until 1 October of 2018.

Tanate Phutrakul holds a master's degree in Chemical Engineering from Imperial College, University of London and an MBA from Harvard Business School.

For further information on ING, please visit www.ing.com. Frequent news updates can be found in the Newsroom or via the @ING_news Twitter feed. Photos of ING operations, buildings and its executives are available for download at Flickr. Footage (B-roll) of ING is available via ing.yourmediakit.com or can be requested by emailing info@yourmediakit.com. ING presentations are available at SlideShare.

This announcement is distributed by West Corporation on behalf of West Corporation clients.
The issuer of this announcement warrants that they are solely responsible for the content, accuracy and originality of the information contained therein.
Source: ING Group via Globenewswire
ING Groep NV (EU:INGA)
Historical Stock Chart
From Jul 2020 to Aug 2020 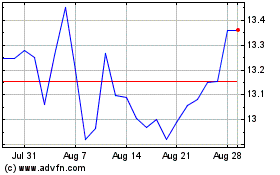 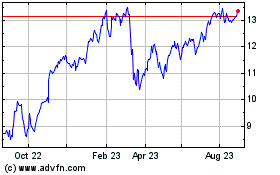