1.22
-0.003093 (-0.25%)
Real-Time
Market Open
1.22
Cash App Set To Bring Bitcoin Lightning Network To Its 36 Million Users
January 12 2022 - 06:10PM
NEWSBTC
The Lightning Network has been integrated into Cash App, a peer-to-peer payment service operated by Block, previously Square Inc. The feature allows transactions between parties that aren’t connected to the blockchain network. It was created to address the scalability issues with the flagship cryptocurrency. Bitcoin Lightning Important For Speedy Transactions Block (previously Square), a fintech firm co-founded by former Twitter CEO Jack Dorsey, owns Cash App. The news of the BTC L2 integration was announced as a notification on the official Cash App app, which Crypto Twitter picked up: The news are real! @CashApp added #Bitcoin Lightning ⚡️Network 🚀 pic.twitter.com/zbbdqcx0dC — Yegor Petrov 🔑⚡️ (@yeg0rpetrov) January 11, 2022 With a throughput of five transactions per second (TPS) and an average transaction price of $1.79, Bitcoin falls far short of the mark in terms of payments. $1.79 is a bargain compared to the highs of April 2021, when transactions cost an average of $62.78. Nonetheless, any transaction costing more than a few cents is impracticable as a widely accepted payment method. With its layer-2 solution, the Lightning Network provides tremendous scalability and cheap transaction costs. It operates by diverting transactions from the main chain and placing them into peer-to-peer “payment channels” between two parties, such as a buyer and a coffee shop. Once the channel is created, it can handle an endless number of transactions in real-time. The payer must first lock Bitcoin into the network to open a payment channel. After the recipient has been locked, they can invoice amounts based on the cost of the items and services sold. Fees are a mix of routing fees for sending payment information between Lightning Nodes and Bitcoin transaction fees for opening and closing channels. These, however, are still far less than direct main chain transactions. In November 2021, the Lightning Network’s total USD value locked (TVL) peaked at $216 million. Since that time, the TVL has reduced. TVL locked in the lightning network. Source: DeFiPulse Block CEO Jack Dorsey, who was previously the CEO of Twitter, has long advocated for the tool’s inclusion. “It’s not a ‘if,’ it’s more of a ‘when,'” he told podcaster Stephan Livera in 2019 that they would combine the scaling technology with payments provider Block’s mobile app. “We don’t think it stops at [bitcoin] buying and selling,” he remarked. Steve Moser, editor-in-chief of TheTapeDrive and a contributor to MacRumors, tweeted in November that Cash App “is working on Lightning network integration.” Moser said he discovered proof that Cash App was preparing to implement the additional features in December. Square’s Cash app is working on Lightning network integration. $SQ #Bitcoin #cashapp #LightningNetwork pic.twitter.com/AzMIfU2xex — Steve Moser (@SteveMoser) November 15, 2021 According to the most recent data from Business of Apps, Cash App had over 36 million users in the United States and the United Kingdom. BTC/USD trades below $%k. Source: TradingView Related article | Number Of Bitcoin Lightning Network Nodes Jumps 23% In Three Months Cash App Is Not The Only One Adding The Feature Belo App, based in Argentina, said on Monday that it has partnered with infrastructure provider OpenNode to enable Lightning Network access to its users. Julie Landrum, OpenNode’s Head of Growth, stated that the deal allows millions of people in Latin America to conduct quick Bitcoin transactions. Last month, ConsenSys, the Ethereum blockchain software startup, announced a solution that makes blockchain technology scalable on the Ethereum Mainnet or for private use, in conjunction with Mastercard. Related article | Lightning Speed: Taproot And The Lightning Network, A Match Made In Heaven Featured image from The Block, chart from TradingView.com, and DeFiPulse
Theta (COIN:THETAUSD)
Historical Stock Chart
From Apr 2022 to May 2022 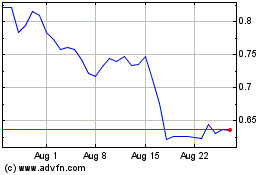 Theta (COIN:THETAUSD)
Historical Stock Chart
From May 2021 to May 2022 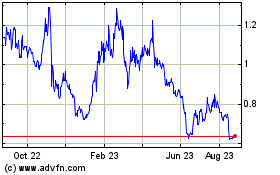 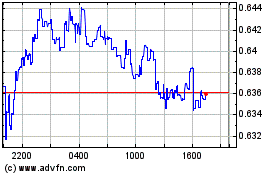