ATHENE HOLDING LTD.
Second Floor, Washington House
16 Church Street
Hamilton, HM 11, Bermuda
(441) 279-8400
Indicate by check mark whether the registrant is an emerging growth company as defined in Rule 405 of the Securities Act of 1933 (§230.405 of this chapter) or Rule 12b-2 of the Securities Exchange Act of 1934 (§240.12b-2 of this chapter).
Emerging growth company ☐
If an emerging growth company, indicate by check mark if the registrant has elected not to use the extended transition period for complying with any new or revised financial accounting standards provided pursuant to Section 13(a) of the Exchange Act. ☐
Item 5.02.    Departure of Directors or Certain Officers; Election of Directors; Appointment of Certain Officers; Compensatory Arrangements of Certain Officers.
On January 7, 2022, William J. Wheeler, President of Athene Holding Ltd. (the “Company”), notified the Company of his decision to resign from his role as President of the Company, effective as of March 31, 2022 (the “Transition Date”). The Company plans to enter into an arrangement with Mr. Wheeler, pursuant to which Mr. Wheeler will transition to the role of Vice Chairman of the Company after the Transition Date. In this role, Mr. Wheeler will remain an employee of the Company and will provide strategic advice to the Company’s senior management as the Company executes its plan for future growth.
As of April 1, 2022, Grant Kvalheim, Executive Vice President of the Company and Chief Executive Officer and President, Athene USA Corporation (“Athene USA”), will assume the role of President of the Company. Mr. Kvalheim, 65, has served as the Chief Executive Officer of Athene USA since June 2015 and served as the Company’s President from January 2011 until September 2015, served as the Company’s Chief Financial Officer from January 2011 until April 2013, and served as a director of the Company from January 2012 until February 2014. Mr. Kvalheim is responsible for the oversight of the Company’s U.S. operating companies with a focus on the Company’s retail annuity and funding agreement channels. Prior to joining the Company, Mr. Kvalheim was a senior executive of Barclays Capital (“Barclays”) from early 2001 to the end of 2007, becoming Co-President in September 2005. During his time at Barclays, he converted a European cash investment grade business into a leading global cash and derivatives business across both securitized and non-securitized credit products, and significantly expanded Barclays’ investment banking platform. Prior to joining Barclays, Mr. Kvalheim held senior executive positions in the investment banks of Deutsche Bank and Merrill Lynch. Mr. Kvalheim has a Bachelor of Arts degree in economics from Claremont McKenna College and a Master of Business Administration in finance from the University of Chicago. He currently serves on the board of directors of Mottahedeh & Co., Sol Health, United Way of Central Iowa, and the Greater Des Moines Partnership. Mr. Kvalheim does not have any family relationships with any of the Company’s directors or executive officers, and is not a party to any transactions listed in Item 404(a) of Regulation S-K.
Effective as of January 7, 2022, the Company appointed Michael S. Downing, Executive Vice President and Chief Actuary of the Company, to the role of Chief Operating Officer of the Company, reporting directly to Mr. Kvalheim. Mr. Downing, 52, has served as the Company’s Executive Vice President and Chief Actuary since 2015. He is responsible for overseeing global actuarial valuation, modeling, pricing, product development, and product go-to-market. Prior to joining the Company, Mr. Downing spent seven years at The Allstate Corporation, leading the turnaround of the annuity business in his role as the Vice President of Inforce and Risk Management. As a result of his success, he was promoted to Senior Vice President for Product and Actuarial Services. Before joining Allstate, Mr. Downing was a Managing Principal at Aon Hewitt, leading the International Consulting practice following overseas assignments in the UK and Switzerland. A founding member of the Pension Risk Services consulting practice, he advised large multinational clients on global benefits strategy, governance and pension risk management. His career in business spans more than 20 years. Mr. Downing holds a bachelor’s degree in Mathematics from Gustavus Adolphus College in St. Peter, Minnesota. He is a Fellow of the Society of Actuaries (FSA), an Enrolled Actuary (EA) and a Certified Enterprise Risk Analyst (CERA). Mr. Downing does not have any family relationships with any of the Company’s directors or executive officers, and is not a party to any transactions listed in Item 404(a) of Regulation S-K.
Mr. Downing is expected to serve as the Company’s Chief Actuary until such time as a successor Chief Actuary has been appointed.
SIGNATURES
Pursuant to the requirements of the Securities Exchange Act of 1934, the registrant has duly caused this report to be signed on its behalf by the undersigned hereunto duly authorized.
Athene (NYSE:ATH)
Historical Stock Chart
From May 2022 to Jun 2022 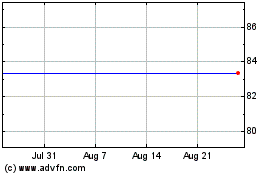 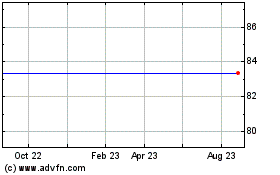 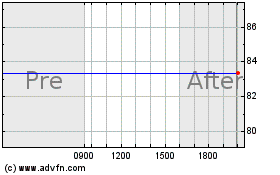