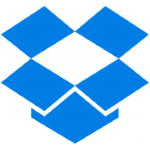 22.26
-0.43 (-1.9%)
Upgrade to Real-Time
Afterhours (Closed)
22.26
Current Report Filing (8-k)
October 29 2020 - 04:21PM
Edgar (US Regulatory)
0001467623false00014676232020-10-292020-10-29
UNITED STATES
SECURITIES AND EXCHANGE COMMISSION
Washington, D.C. 20549
Form 8-K
CURRENT REPORT
Pursuant to Section 13 or 15(d)
of the Securities Exchange Act of 1934
October 29, 2020
Date of Report (date of earliest event reported)
DROPBOX, INC.
(Exact name of Registrant as specified in its charter)
1800 Owens St.
San Francisco, California 94158
(Address of principal executive offices)
(415) 857-6800
(Registrant’s telephone number, including area code)
N/A
(Former name or former address, if changed since last report)
Check the appropriate box below if the Form 8-K filing is intended to simultaneously satisfy the filing obligation of the registrant under any of the following provisions (see General Instruction A.2. below):
☐    Written communications pursuant to Rule 425 under the Securities Act (17 CFR 230.425)
☐    Soliciting material pursuant to Rule 14a-12 under the Exchange Act (17 CFR 240.14a-12)
☐    Pre-commencement communications pursuant to Rule 14d-2(b) under the Exchange Act (17 CFR 240.14d-2(b))
☐    Pre-commencement communications pursuant to Rule 13e-4(c) under the Exchange Act (17 CFR 240.13e-4(c))
Securities registered pursuant to Section 12(b) of the Act:
Indicate by check mark whether the registrant is an emerging growth company as defined in Rule 405 of the Securities Act of 1933 (§230.405 of this chapter) or Rule 12b-2 of the Securities Exchange Act of 1934 (§240.12b-2 of this chapter).
Emerging growth company ☐
If an emerging growth company, indicate by check mark if the registrant has elected not to use the extended transition period for complying with any new or revised financial accounting standards provided pursuant to Section 13(a) of the Exchange Act.  ☐
Item 5.02 - Departure of Directors or Certain Officers; Election of Directors; Appointment of Certain Officers; Compensatory Arrangements of Certain Officers
On October 29, 2020, Dropbox, Inc. (“Dropbox”) announced that Timothy Young, previously the company’s Senior Vice President and General Manager, Core Dropbox, has been promoted to the position of President effective November 2, 2020. Dropbox also announced that Bharat Mediratta is stepping down as Chief Technology Officer and Senior Vice President, Platform, effective November 2, 2020.

“Since he’s joined us, I’ve been incredibly impressed by Timothy’s vision for our products, his leadership on strategic initiatives, and his ability to execute,” said Drew Houston, Co-Founder and CEO of Dropbox. “With our new structure, and with Timothy as President, I’m confident in our unified product, engineering, and go-to-market teams, and our ability to move quickly to meet the opportunities ahead.”
“I’m so honored and excited to take on the new role of President,” said Mr. Young. “I’m also energized by the potential of our newly combined teams — with product, engineering, design and go-to-market operating as one, we have the opportunity to make an even bigger impact in the lives of our customers as they navigate the transition to distributed work. Thank you to Drew and the rest of the management team for this opportunity as we embark on this journey together.”
Mr. Young has served as Dropbox’s Senior Vice President and General Manager, Core Dropbox, since October 2019. Prior to joining Dropbox and since January 2015, Mr. Young served as a Founder of Hidden Hand Capital, which invests in early stage technology companies. Prior to founding Hidden Hand Capital, from May 2011 to September 2014, he was Vice President of Product and Engineering at VMware, a cloud infrastructure and digital workspace company, where he led product development and strategic product planning for cloud and mobile applications. From June 2005 to May 2011, he was the Founder and CEO of Socialcast, which was acquired by VMware. From December 2009 to December 2010, he was a Co-Founder of about.me, which was acquired by AOL. Mr. Young attended the University of California, Riverside, where he studied Computer Science.
Dropbox entered into a letter agreement with Mr. Young (the “Employment Letter”) dated October 28, 2020, pursuant to which, effective as of November 2, 2020, Mr. Young’s annual base salary will increase from $500,000 to $600,000. Mr. Young’s annual target bonus will continue to be 100% of his annual base salary. In addition, Mr. Young will be granted a one-time restricted stock award (the “Grant”) covering shares of the company’s Class A common stock with a target value of $10,000,000, subject to the terms of Dropbox’s 2018 Equity Incentive Plan (the “Plan”) and a restricted stock award agreement to be entered into between Mr. Young and Dropbox (the “RSA Agreement”). The Grant is subject to service-based and market-based vesting conditions and may become eligible to vest over an approximately three-year period (the “Performance Period”) beginning January 1, 2021. The target number of shares subject to the Grant are divided into three equal tranches (each, a “Grant Tranche”), and the shares subject to a Grant Tranche may become eligible to vest based on the achievement of stock price goals (each, a “Stock Price Target”) measured over a consecutive thirty-day trading period during a twelve-month period (each, a “Measurement Period”) that begins on one anniversary of the grant date (or in the case of the first Measurement Period, on the grant date) and ends on the next anniversary of the grant date, as follows:

No more than 300% of the target number of shares subject to a Grant Tranche, may become eligible to vest in any Measurement Period. Any shares subject to a Grant Tranche that become eligible for vesting are referred to herein as the “Eligible Shares.” Mr. Young will generally forfeit any shares subject to a Grant Tranche that do not become Eligible Shares as of immediately following the end of the Measurement Period for that Grant Tranche.
Applicable Eligible Shares will vest annually on the earlier of February 15 following the end of each Measurement Period or immediately prior to a “change in control” (as defined in the Plan), subject to Mr. Young’s continued service with Dropbox through that date or the date of the change in control, as applicable.
In addition, in the event of a change in control prior to the completion of the Performance Period, Mr. Young will be eligible to vest in additional shares subject to the Grant Tranche for any uncompleted Measurement Period(s) if the per share deal price in the change in control (which will be treated as the stock price) causes a Company Stock Price Target that has not previously been achieved to be satisfied, in which case the shares that become Eligible Shares due to the achievement of that Company Stock Price Target will vest immediately prior to the change in control, subject to Mr. Young’s continued service through the date of the change in control.
The foregoing description is qualified in its entirety by reference to the Employment Letter and the RSA Agreement, each of which will be filed with Dropbox’s Quarterly Report on Form 10-Q for the quarter ending September 30, 2020.
Mr. Young has also previously executed Dropbox’s standard form of change in control and severance agreement, a copy of which was filed as Exhibit 10.11 to the company’s Annual Report on Form 10-K for the fiscal year ended December 31, 2019 (File No. 001-38434), filed with the Securities and Exchange Commission (the “SEC”) on February 21, 2020, and the Grant will be subject to the terms and conditions of that agreement.
There are no arrangements or understandings between Mr. Young and any other persons pursuant to which Mr. Young was appointed as President of Dropbox. There are also no family relationships between Mr. Young and any director or executive officer of Dropbox and he has no direct or indirect interest in any transaction or proposed transaction required to be disclosed pursuant to Item 404(a) of Regulation S-K.
Mr. Mediratta will remain at Dropbox to help with the transition until December 1, 2020. He will receive a transition payment of $475,000.00 and execute a general release of claims in favor of Dropbox and its affiliates containing customary non-disparagement covenants.
“I want to thank Bharat for his leadership,” said Drew. “In his time here, he’s led Dropbox’s platform strategy for the future while helping us grow our ecosystem and product portfolio, including the success we’ve seen with HelloSign. We’re grateful for his many contributions to our company, and we’ll miss him.”
“I’m grateful to Drew and the management team for the opportunity to be part of the Dropbox story,” said Bharat. “It’s been an incredible experience to work with such a talented team, and help scale our platform. With the investments this team led in our technical foundation, I’m confident Dropbox is set up for future success. Congratulations to Timothy, and I’ll always be a Dropbox fan.”
For additional information, see the blog post attached as Exhibit 99.1 to this Current Report on Form 8-K.
Item 9.01 - Financial Statements and Exhibits
(d) Exhibits:

.
SIGNATURES
Pursuant to the requirements of the Securities Exchange Act of 1934, as amended, the Registrant has duly caused this report to be signed on its behalf by the undersigned hereunto duly authorized.
Dated: October 29, 2020
Dropbox (NASDAQ:DBX)
Historical Stock Chart
From Dec 2020 to Jan 2021 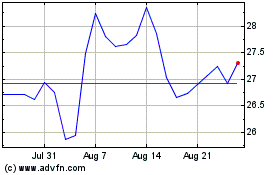 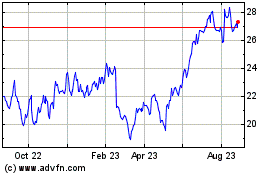 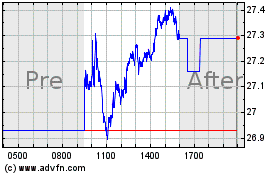