Global stock markets slipped Monday as investors wrapped up a month of trading dominated by concerns over inflation and the pace of the international economic recovery.

Trading was light with holidays in the U.S. and the U.K. S&P 500 stock futures were down slightly Monday.

In Europe, Germany's DAX index slid 0.6%, dragged down by Deutsche Bank shares, which fell 1.3%. The Wall Street Journal reported Sunday that the Federal Reserve told the bank in recent weeks that it is failing to address persistent shortcomings in its anti-money-laundering controls, according to people familiar with the matter.

The index, which opened lower, fell further after data showed inflation in the country rose to 2.4% in May, the highest level since November 2018.

In Spain, where inflation also rose to 2.4% in May, the IBEX index fell 0.8%. Shares of utility companies dropped over a draft bill the government is preparing that could drive down electricity prices in the country. Endesa shares closed down almost 6%.

In Asia, Japan's Nikkei 225 fell 1%. Hong Kong's local benchmark Hang Seng Index closed up 0.1%. In mainland China, the benchmark CSI 300 also closed up 0.2%. An official purchasing managers index for the manufacturing sector came in at 51.0 for May -- down slightly from a reading of 51.1 a month earlier, but still above the 50-mark that separates expansion from contraction.

Markets were likely to remain unsettled as investors try to gauge the prospects for U.S. growth and price rises from data points such as payroll figures due this Friday, said Mary Nicola, a fund manager at PineBridge Investments. "Everyone is focused on inflation," she said.

Ms. Nicola said a key question for investors was how this would affect Federal Reserve policy, including the time frame in which the central bank might begin tapering, or reducing its asset purchases. She added that her firm was overweight European and Japanese stocks -- holding more of these shares than the benchmarks it tracks -- given it believed both markets were attractively valued and stood to benefit from a world-wide economic recovery.

U.S. markets are closed Monday for Memorial Day. For the whole of May, the S&P 500 recovered from inflation-driven volatility earlier in the month to record its fourth consecutive monthly gain.

In the currency markets, the dollar inched lower, with the WSJ Dollar index dropping 0.2% to 85.07. 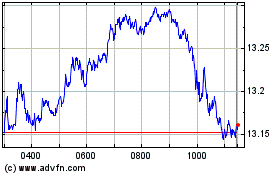