Exact name of registrant as specified in its charter

If an emerging growth company, indicate by check mark if the Registrant has elected not to use the extended transition period for complying with any new or revised financial accounting standards provided pursuant to Section 13(a) of the Exchange Act. ☐

The information required by this item is included in Item 2.03 below and is incorporated herein by reference.

On October 27, 2021, Vertiv Holding Co (the “Company”) issued a press release announcing its financial results for the three and nine months ended September 30, 2021, which is furnished herewith as Exhibit 99.1 and is incorporated herein by reference in its entirety.

The information furnished pursuant to this Item 2.02 and Item 7.01, including Exhibits 99.1 and Exhibit 99.2, is being furnished and shall not be deemed “filed” for purposes of Section 18 of the Securities Exchange Act of 1934 (the “Exchange Act”) or otherwise subject to the liabilities under that Section. The information in this Item 7.01, including Exhibit 99.1 and Exhibit 99.2, shall not be deemed incorporated by reference into any filing of the Company under the Securities Act of 1933, as amended (the “Securities Act”) or the Exchange Act, except as shall be expressly set forth by specific reference in such a filing.

On October 22, 2021, Vertiv Group Corporation (the “Issuer”), a subsidiary of the Company, issued $850 million in aggregate principal amount of 4.125% Senior Secured Notes due 2028 (the “Notes”) (the “Offering”). The Notes and related guarantees were issued pursuant to an indenture, dated October 22, 2021, among the Issuer, the guarantors party thereto and UMB Bank, N.A., as trustee and collateral agent (the “Indenture”). The Issuer will pay interest on the Notes semi-annually in arrears on May 15 and November 15 of each year, commencing on May 15, 2022. Unless earlier redeemed, the Notes will mature on November 15, 2028. The Notes and related guarantees were offered in a private placement exempt from registration under the Securities Act, to qualified institutional buyers pursuant to Rule 144A under the Securities Act and to certain non-U.S. persons outside of the United States in reliance on Regulation S under the Securities Act.

The Company intends to use the net proceeds from the Offering, together with cash on hand, to finance the cash portion of the purchase price of the acquisition by the Company of E&I Engineering Ireland Limited and its affiliate, Powerbar Gulf LLC (the “Acquisition”) and to pay fees and expenses related to the Acquisition and the Offering.

At any time prior to November 15, 2024, the Notes may be redeemed at the Issuer’s option, in whole or in part, at a price equal to 100% of the principal amount of the Notes redeemed, plus a make-whole premium as set forth in the Indenture, plus accrued and unpaid interest, if any, to, but excluding, the applicable redemption date.

If (i) the consummation of the Acquisition does not occur on or before December 31, 2021 (or such later date if the end date is extended pursuant to the terms of the acquisition agreement) (the “End Date”) or (ii) the Issuer delivers a notice to the trustee stating it has determined that the consummation of the Acquisition will not occur on or before the End Date (the earlier of the date of delivery of such notice and the End Date, the “Acquisition Deadline”), the Issuer will be required to redeem all of the outstanding Notes at 100% of the aggregate principal amount of the Notes, plus accrued and unpaid interest to, but excluding, the date that is no later than ten days after the Acquisition Deadline. If the Issuer sells certain of its assets, subject to certain exceptions, it must offer to purchase the notes.

Subject to certain exceptions, the holders of the Notes will have the right to require the Issuer to repurchase the Notes upon the occurrence of a change in control accompanied by a ratings downgrade at an offer price equal to 101% of the principal amount of the Notes, plus accrued and unpaid interest, if any, to, but not including, the date of repurchase.

The Indenture contains covenants (subject to certain limitations and exceptions) that limit the Issuer’s (and its subsidiaries’) ability to, among other things: (i) incur additional debt or guarantee debt; (ii) pay dividends, redeem stock or make other distributions;

The Indenture provides for customary events of default, including non-payment, failure to comply with covenants or other agreements in the Indenture, certain events of bankruptcy or insolvency and certain defaults with respect to the security documentation related to the Notes and the collateral securing the Notes and the related guarantees. If an event of default occurs and continues with respect to the Notes, the trustee or the holders of at least 25% in aggregate principal amount of the outstanding Notes may declare the entire principal amount of the Notes to be due and payable immediately (except that if such event of default is caused by certain events of bankruptcy or insolvency, the entire principal of the Notes will become due and payable immediately without further action or notice).

On October 22, 2021, the Company issued a press release announcing the closing of the Offering. The full text of the press release is attached as Exhibit 99.2 to this Current Report and is incorporated by reference herein.

The information set forth under 2.02 is incorporated into this Item 7.01 by reference. 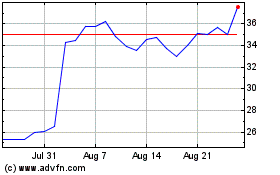 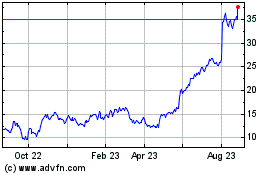 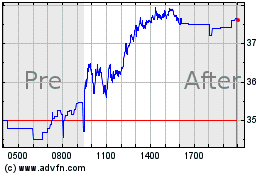