Energizer Holdings, Inc.
(Exact Name of Registrant as Specified in its Charter)

Check the appropriate box below if the Form 8-K filing is intended to simultaneously satisfy the filing obligation of the registrant under any of the following provisions (see General Instruction A.2. below):
Indicate by check mark whether the registrant is an emerging growth company as defined in Rule 405 of the Securities Act of 1933 (17 CFR §230.405) or Rule 12b-2 of the Securities Exchange Act of 1934 (17 CFR §240.12b-2).
Emerging growth company ☐
If an emerging growth company, indicate by check mark if the registrant has elected not to use the extended transition period for complying with any new or revised financial accounting standards provided pursuant to Section 13(a) of the Exchange Act. ☐
Senior Notes Due 2029
On June 23, 2021, Energizer Gamma Acquisition B.V. (the “Issuer”), a wholly owned subsidiary of Energizer Holdings, Inc., a Missouri corporation (the “Company”), completed the issuance and sale of €650 million aggregate principal amount of 3.500% Senior Notes due 2029 (the “Notes”), as contemplated by the Purchase Agreement, dated June 9, 2021 (the “Purchase Agreement”), by and among the Issuer, BofA Securities Europe SA, as representative of the purchasers listed therein (the “Initial Purchasers”), the Company and the other guarantors party thereto. The Notes were issued pursuant to an indenture, dated as of June 23, 2021 (the “Indenture”), among the Company, the guarantors party thereto from time to time, The Bank of New York Mellon Trust Company, N.A., as trustee and registrar (the “Trustee”), and The Bank of New York Mellon, London Branch, as paying agent.
The net proceeds of the offering, together with cash on hand, are being used by the Issuer to (i) satisfy and discharge the Issuer’s €650 million aggregate principal amount 4.625% Senior Notes due 2026 (the “2026 Notes”), and (ii) pay fees and expenses related to the offering of the Notes and refinancing of the 2026 Notes.
The Notes were sold to the Initial Purchasers pursuant to the exemption provided by Section 4(a)(2) of the Securities Act of 1933, as amended (the “Securities Act”). The Issuer did not register the issuance of the Notes under the Securities Act because such issuance did not constitute a public offering. The Notes were sold to qualified institutional buyers pursuant to Rule 144A (and outside the United States to qualified investors in reliance on Regulation S) under the Securities Act. The Notes have not been registered under the Securities Act or applicable state securities laws, and may not be offered or sold absent registration under the Securities Act or applicable state securities laws or applicable exemptions from registration requirements.
Interest and Maturity
The Notes accrue interest at a rate of 3.500% per annum and will mature on June 30, 2029.
Guarantees
The Notes are guaranteed, jointly and severally, on an unsecured basis, by the Company and each of the Company’s domestic restricted subsidiaries that is a borrower or a guarantor under the credit agreement dated December 22, 2020, by and among the Company, the lenders and issuing banks from time to time party thereto and JPMorgan Chase Bank, N.A., as administrative agent, as amended from time to time (the “Credit Agreement”).

Default
The Indenture provides for customary events of default. Generally, if an event of default occurs (subject to certain exceptions), the Trustee, acting at the direction of the registered holders of not less than 30% in aggregate principal amount of the then-outstanding Notes may declare all the Notes to be due and payable immediately.
General
Copies of the Indenture and the form of Notes are filed as Exhibits 4.1 and 4.2, respectively, to this Current Report on Form 8-K and are incorporated herein by reference. The descriptions above are summaries of such agreements, do not purport to be complete, and are qualified in their entirety by the complete texts of each such agreement.
Certain of the Initial Purchasers and the Trustee or their affiliates perform various financial advisory, investment banking and commercial banking services from time to time for the Company and its affiliates for which they have received customary fees and compensation for these transactions and may in the future receive customary fees and compensation.
The information set forth in Item 1.01 above is incorporated by reference into this Item 2.03.
On June 23, 2021, the Company issued a press release announcing the completion of the offering of the Notes and related matters. A copy of the press release is attached to this Current Report on Form 8-K as Exhibit 99.1 hereto and incorporated herein by reference.
(d) Exhibits
The following exhibits are attached hereto:
SIGNATURES
Pursuant to the requirements of the Securities Exchange Act of 1934, the Registrant has duly caused this Current Report on Form 8-K to be signed on its behalf by the undersigned hereunto duly authorized.
Energizer (NYSE:ENR)
Historical Stock Chart
From Sep 2021 to Oct 2021 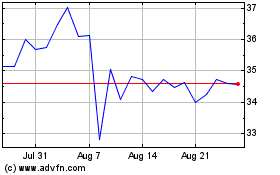 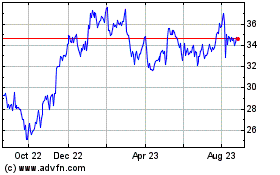 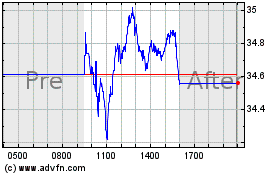