0.028748
0.000641 (2.28%)
Real-Time
Market Open
0.028748
Bitcoin Open Interest, Funding Rates Point To Growing Bullish Sentiment
September 16 2022 - 07:00PM
NEWSBTC
Bitcoin has seen fluctuating sentiment lately. With numerous dips and recoveries, it is no surprise that investors have had a hard time deciding on which side of the fence to sit on. However, while retail investors seem to be uncertain about the market, there has been some growth in both the funding rates and the open interest over the last week, showing that positive sentiment may be stabilizing. Funding Rates Recover Over the last couple of weeks, bitcoin funding rates have been consistently below neutral. This coincided with the times when the market was struggling, ushering in a new bear trend. But with the last week’s events, there has been a remarkable recovery in the funding rates. Related Reading: Displaced ETH Miners Seek Refuge In Ethereum Classic, Ravencoin Toward the end of last week, the funding rates had returned to neutral levels for the first time in one month. It followed the recovery in bitcoin’s price last Friday before it slid back down. The bitcoin funding rates have since lost their footing at the neutral territory but continue to maintain higher levels before the BTC recovery on Friday. Funding rates return to neutral | Source: Arcane Research What this shows is that there is still demand for both bitcoin longs and shorts. This means that while it does look to be swinging in the favor of the bulls due to the elevated levels, it is still an uncertain market. Additionally, last week’s recovery to neutral levels did not really change much about the current trend, as funding rates have now spent nine consecutive months at or below neutral levels. Bitcoin Open Interest Say ‘Short Squeeze’ Despite the decline in the bitcoin price, the open interest has not had a hard time of it like the rest of the market. Instead, BTC-denominated open interest has hit multiple new all-time highs this year, leading to various short squeezes in the market. Open interest continued to see favorable market conditions as it hit a new all-time high of 421,000 BTC last Wednesday. Even the short squeeze that was recorded on Friday did not do much to bring down the open interest, which remained elevated at 418,000 BTC at the start of this week.  Related Reading: Ethereum Merge Fails To Move ETH Price, $2,000 Remains Elusive The depressed market sentiment suggests that this elevated trend is unlikely to continue for very long. Bitcoin’s price decline also points to this, given that the elevated open interest coincided with a period of price recovery. It also means that bears have been in control of the market for the period where the open interest has been high. Bitcoin’s fall below $20,000 is a testament that short traders continue to control the market.  Featured image from PYMNTS, charts from Arcane Research and TradingView.com Follow Best Owie on Twitter for market insights, updates, and the occasional funny tweet…
Ravencoin (COIN:RVNUSD)
Historical Stock Chart
From Jan 2023 to Feb 2023 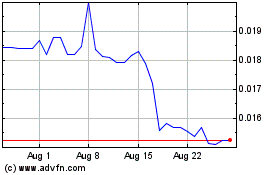 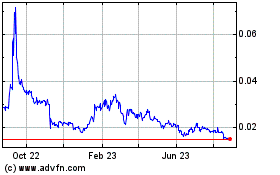 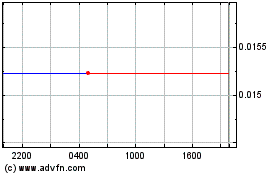