As previously reported on the Trust’s Form 10-K for the year ended December 31, 2019, Hilcorp San Juan LP (“Hilcorp”), the working interest owner in the New Mexico portion of the San Juan Basin properties, made an estimated monthly payment of $97,150 in net proceeds to the Trust with respect to the September 2017 to March 2019 accounting months consistent with the July 2017 production month previously paid by ConocoPhillips, the prior owner of the properties. In April 2019, Hilcorp began to generate actual (instead of estimated) net proceeds due to the Trust on a monthly basis going forward. Hilcorp has informed the Trust that it will utilize actual revenue and expense amounts and either add or subtract reconciled historical amounts on a month-by-month basis for the accounting months from September 2017 to March 2019, which will be recognized as information is received by the Trust in accordance with the Trust's modified cash basis of accounting. Hilcorp has informed the Trust that such reconciliation of historical amounts has been temporarily suspended due to the COVID-19 pandemic. Accordingly, the income distribution for the month of May 2020 does not include any such reconciled amounts. Hilcorp has also informed the Trust that significant incremental expenses were incurred for the New Mexico portion of the San Juan Basin properties during the time that the estimated payments were being made. Accordingly, it is expected that reconciliations with respect to some or all of the prior periods will have a negative impact on income of the Trust until all reconciliations are complete.

This press release contains forward-looking statements. No assurances can be given that the expectations contained in this press release will prove to be correct. The working interest owners alone control historical operating data, and handle receipt and payment of funds relating to the royalty properties and payments to the Trust for the related royalty. The Trustee cannot assure that errors or adjustments by the working interest owners, whether historical or future, will not affect future royalty income and distributions by the Trust. Other important factors that could cause these statements to differ materially include delays in actual results of drilling operations, risks inherent in drilling and production of oil and gas properties, declines in commodity pricing, and other factors described in the Trust’s Form 10-K for the year ended December 31, 2019 under “Part I, Item 1A. Risk Factors.” Statements made in this press release are qualified by the cautionary statements made in such risk factors. The Trust does not intend, and assumes no obligations, to update any of the statements included in this press release. 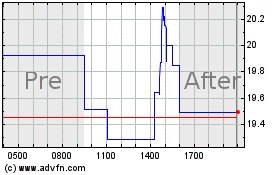