•As of March 31, 2022, the Company retained restructuring reserves as part of the Company's divestiture of the majority of its global Interiors business (the "Interiors Divestiture") of $2 million associated with completed programs for the fundamental reorganization of operations at facilities in Brazil and France.

Liquidity
The Company's primary sources of liquidity are cash flows from operations, existing cash balances, and borrowings under available credit facilities. As we continue to evaluate ongoing impacts of the COVID-19 pandemic including the semiconductor supply shortage and other supply chain impacts, the Company believes funds generated from these sources will continue to sufficiently sustain ongoing operations and support investment in differentiating technologies. The Company will continue to closely monitor its available liquidity and maintain access to additional liquidity to weather these challenging conditions. The Company's intra-year needs are normally impacted by seasonal effects in the industry, such as mid-year shutdowns, the ramp-up of new model production, and year-end shutdowns at key customers. The ongoing COVID-19 pandemic and related semiconductor supply shortage may exacerbate the intra-year requirements.
A substantial portion of the Company's cash flows from operations are generated by operations located outside of the United States. Accordingly, the Company utilizes a combination of cash repatriation strategies, including dividends and distributions, royalties, and other intercompany arrangements to provide the funds necessary to meet obligations globally. The Company’s ability to access funds from its subsidiaries is subject to, among other things, customary regulatory and statutory requirements and contractual arrangements including joint venture agreements and local credit facilities. Moreover, repatriation efforts may be modified by the Company according to prevailing circumstances.
Access to additional capital through the debt or equity markets is influenced by the Company's credit ratings. As of March 31, 2022, the Company’s corporate credit rating is Ba3 and BB- by Moody’s and Standard & Poor’s, respectively. See Note 8, "Debt" for a comprehensive discussion of the Company's debt facilities. Incremental funding requirements of the Company's consolidated foreign entities are primarily accommodated by intercompany cash pooling structures. Affiliate working capital lines, which may be utilized by the Company's local subsidiaries and consolidated joint ventures, had availability of $150 million and the Company had $400 million of available credit under the revolving credit facility, as of March 31, 2022. As of March 31, 2022, the Company was in compliance with all its debt covenants.
27
Cash Balances
As of March 31, 2022, the Company had total cash and cash equivalents of $405 million, including $3 million of restricted cash. Cash balances totaling $339 million were located in jurisdictions outside of the United States, of which approximately $115 million is considered permanently reinvested for funding ongoing operations outside of the U.S. If such permanently reinvested funds were repatriated to the U.S., no U.S. federal taxes would be imposed on the distribution of such foreign earnings due to U.S. tax reform enacted in December 2017. However, the Company would be required to accrue additional tax expense, primarily related to foreign withholding taxes.
Other Items Affecting Liquidity
During the three months ended March 31, 2022, cash contributions to the Company's defined benefit plans were $1 million related to its non-U.S. plans. The Company estimates that total cash contributions to its non-U.S. defined benefit pension plans during 2022 will be $4 million.
During the three months ended March 31, 2022, the Company paid $5 million related to restructuring activities. Additional discussion regarding the Company's restructuring activities is included in Note 3, "Restructuring Activities." The Company estimates that total cash restructuring payments during the next twelve months will be approximately $14 million.
The Company committed to make a $15 million investment in two funds managed by venture capital firms principally focused on the automotive sector pursuant to limited partnership agreements. As of March 31, 2022, the Company contributed $10 million toward the aggregate investment commitments. As a limited partner in each entity, the Company will periodically make capital contributions toward this total commitment amount.
The Company may be required to make significant cash outlays related to its unrecognized tax benefits, including interest and penalties. As of March 31, 2022, the Company had unrecognized tax benefits, including interest and penalties, that would be expected to result in a cash outlay of $8 million. Given the number of years, jurisdictions and positions subject to examination, the Company is unable to estimate the period of cash settlement, if any, with the respective taxing authorities.
28
Cash Flows
Operating Activities
The Company used $21 million of cash from operating activities during the three months ended March 31, 2022 representing increased usage of 32 million as compared to prior year. The decrease in cash from operations is primarily attributable to increased working capital outflows. Increased working capital outflows of $29 million as compared to prior year were primarily attributed to higher inventory levels resulting from the uneven supply chain environment, an increase in safety stock levels and higher raw material prices. These increases were partially offset by an increase in Adjusted EBITDA (a non-GAAP financial measure, as discussed in Note 15, "Segment Information").
Investing Activities
Net cash used by investing activities during the three months ended March 31, 2022 totaled $21 million, representing a $6 million increase as compared to $15 million use of cash from investing activities during the same period in 2021. Higher cash used by investing activities is primarily attributable to a $3 million increase in capital expenditures during the three months ended March 31, 2022 as compared to the same period in 2021 and the non-recurrence of loan repayments received from non-consolidated affiliates of $2 million during the three months ended March 31, 2021.
Financing Activities
Cash used by financing activities during the three months ended March 31, 2022 was $4 million and is attributable to the payment of subsidiary borrowings.

See the information above under Note 14, "Commitments and Contingencies," to the condensed consolidated financial statements which is incorporated herein by reference.

Item 1A.Risk Factors
Except as set forth below, as of March 31, 2022, there have been no material changes to the risk factors that were previously disclosed in Item 1A in the Company’s Form 10-K for the year ended December 31, 2021 filed with the SEC on February 17, 2022.
We are currently operating in a period of significant macro-economic uncertainty, including supply-chain disruptions and COVID-related lockdowns and increasing inflationary pressures and component costs. Although we have minimal operations in Russia, the conflict in Ukraine and the current COVID-related lockdowns in China are exacerbating component cost increases, supply chain challenges including the availability of natural resources used in production by our suppliers, and volatility with our customers’ production schedules. If the conflict in Ukraine continues for a lengthy period or spreads or the COVID-related lockdowns in China continue for a lengthy period or spread, it may have a materially negative impact on our business and results of operations.
The macro-economic uncertainty has been exacerbated by the conflict in Ukraine. Although the length and impact of the ongoing conflict is highly unpredictable, it has exacerbated the availability, and volatility in prices, of commodities and components, inflationary pressures, credit markets, foreign exchange rates and supply chain disruptions. Furthermore, governments in the United States, United Kingdom, Canada and European Union have each imposed financial and economic sanctions on certain industry sectors and parties in Russia. These sanctions include controls on the export, re-export, and in-country transfer in Russia of certain goods, supplies, and technologies, including some that we use in our business in Russia. Existing or additional sanctions could further adversely affect the global economy, lead to litigation related to compliance with such sanctions, or further disrupt the global supply chain. Inflation is also currently high world-wide and may continue for an unforeseen time.
The negative impact of the conflict in Ukraine and the current COVID lock-downs in China may exacerbate cost increases in raw material, transportation, energy, and commodities. Although we are negotiating with our customers with respect to these additional cost increases, commercial negotiations with our customers may not be successful or may not offset all of the adverse impact of higher transportation, energy and commodity costs. Additionally, even if we are successful with respect to negotiations with customers relating to cost increases, there may be delay before we recover any increased costs. These may have a material negative impact on our business and results of operations.
For additional information see Part I, Item 1A, "Risk Factors" in our Annual Report on Form 10-K for the year ended December 31, 2021 filed with the SEC on February 17, 2022. See also, "Forward-Looking Statements" included in Part I, Item 2 of this Quarterly Report on Form 10-Q.
Item 2.Unregistered Sales of Equity Securities and Use of Proceeds
There were no purchases made by or on behalf of the Company, or an affiliated purchaser, of shares of the Company’s common stock during the first quarter of 2022.
Item 6.Exhibits
The exhibits listed on the "Exhibit Index" on Page 35 hereof are filed with this report or incorporated by reference as set forth therein.
34
Exhibit Index
*    Indicates that exhibit is a management contract or compensatory plan or arrangement.
**    Pursuant to Rule 406T of Regulation S-T, the Interactive Data Files as Exhibit 101 hereto are deemed not filed or part of a registration statement or prospectus for purposes of Sections 11 or 12 of the Securities Act of 1933, as amended, are deemed not filed for purposes of Section 18 of the Securities and Exchange Act of 1934, as amended, and otherwise are not subject to liability under those sections.
In lieu of filing certain instruments with respect to long-term debt of the kind described in Item 601(b)(4) of Regulation S-K, Visteon agrees to furnish a copy of such instruments to the Securities and Exchange Commission upon request.
Signatures
Pursuant to the requirements of Section 13 of the Securities Exchange Act of 1934, Visteon Corporation has duly caused this Report to be signed on its behalf by the undersigned, thereunto duly authorized.
Date: April 28, 2022
35
Visteon (NASDAQ:VC)
Historical Stock Chart
From Dec 2022 to Jan 2023 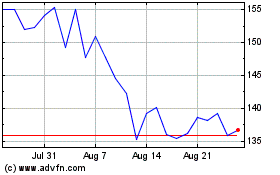 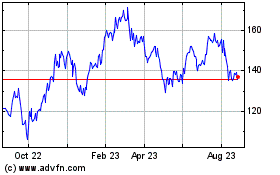 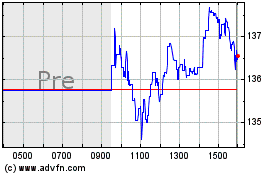