--Full-year impairment charges are likely to be at the lower end of the GBP3.5 billion-GBP4.5 billion range

NatWest Group PLC on Friday reported an unexpected swing to profit for the third quarter of 2020 on lower-than-feared impairments.

NatWest was expected to report a pretax loss of GBP75 million for the third quarter of the year, and impairment losses of GBP628 million, according to the bank's own compilation of forecasts.

Nat West's Common Equity Tier 1 capital ratio --a measure of a bank's financial strength-- stood at 18.2% at the end of the quarter, up from 17.2% as at June 30. It was anticipated at 16.7%, according to the lender's compilation of forecasts.

The bank added that it maintains its outlook guidance for the whole year, but noted that impairment charges are now likely to be at the lower end of the GBP3.5 billion-GBP4.5 billion range following the limited level of defaults across lending portfolios in the third quarter. 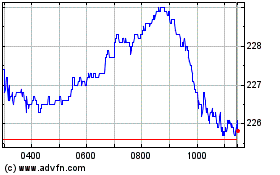