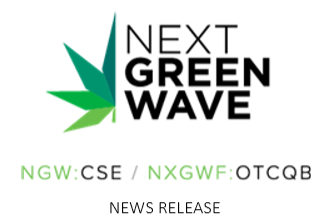 VANCOUVER, British Columbia -- August 23, 2019 -- InvestorsHub NewsWire -- Next Green Wave Holdings Inc. (CSE: NGW) (OTCQX: NXGWF) ("Next Green Wave", “NGW” or the "Company") announces that it has successfully completed its first premium cannabis flower harvest and hit all major milestones to become fully operational this month. All 14 flower rooms have now been stocked with plants, 6 of which are in the flowering stage nearing harvest. This future output will allow the Company to execute on its four revenue segments; nursery, cultivation, extraction and product distribution. 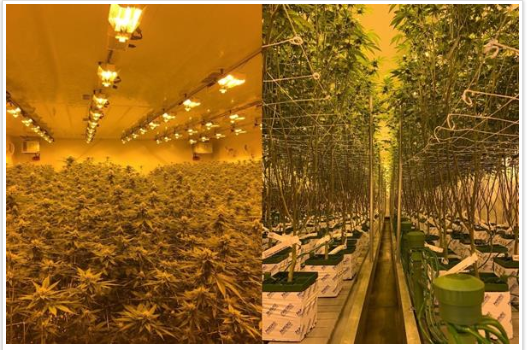 The Company’s first harvest has passed strict California category three compliance testing and received a Certificate of Analysis (COA)* free of any microbial, mycotoxins, pesticides, heavy metals and foreign materials. All the strains tested met premium quality industry standards for sale in California. The lack of licensed premium flower for sale in California opens the door for producers to take advantage of the underserved market.

The Company’s next yield is expected in the coming weeks and will be processed for sale and distribution through the Company’s SDC Branding House (WEARESDC) and partner brands; Loki the Wolf Dog, Carey Hart, King Louie, Sketchy Tank, Junkyard LA, Toy Machine Skateboard, OSS, Thorn St. Brewing and No Jumper.

“This is a significant turning point for the company. The NGW team has worked steadfast to get the facility built, operating and into revenue, and bring our premium products and brands to market as quickly as possible, kickstarting the beginning of our evolution. We are appreciative of our supportive stakeholders and we look forward to a strong future – one in which we are confident will be rewarding.” -stated Mike Jennings, CEO.

Watch the full drone footage of the facility here: https://www.globenewswire.com/NewsRoom/AttachmentNg/5c1a71ca-144e-40bd-aa48-ff2734458e0d 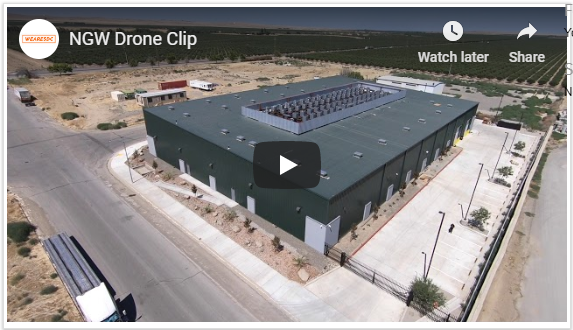 In addition, the Company is pleased to announce the following changes to its senior leadership team:

Mr. Mike Jennings has been appointed as the interim Chief Executive Officer coincident with his role as Chief Operating Officer. As one of the Company’s founders, Mike is ideally acquainted with all aspects of the operation and is well suited to lead the Company through its next phase of operations and earnings.

Mr. Matt Jewell, the Company’s VP of Finance, has been appointed as Chief Financial Officer. He has spent the last several years assisting companies in emerging industries in the State of California scale from a financial reporting, treasury, Human Resources, legal and operational perspective. Before joining Next Green Wave 14 months ago, Mr. Jewell spent the initial years of his career at KPMG where he gathered his base knowledge of financial reporting, tax, compliance, process and control implementation.

Mr. Ryan Lange, SDC’s Co-Founder, has been appointed as the company’s Chief Marketing Officer. Ryan is an entrepreneur with an extensive background in creative arts, digital media and cannabis. Ryan’s work has been featured on the Today Show, High Times, US Weekly, People Magazine, Dr. Oz, Forbes and GQ among many others. Ryan has collaborated on and launched major branding campaigns for some of the most successful corporations in the country including Nike, Apple Music, Harmless Harvest, Carhartt and Home Depot.

All three team members were instrumental to Next Green Wave’s rapid development over the last year and will continue to lead the company through this exciting next stage of growth.

The following incidental corporate appointments have also been made:

Paul Chow, Glen Harder and Mike Jennings have been appointed to the Company’s Audit Committee.

Monita Farris has been appointed as Corporate Secretary.

About Next Green Wave
NGW is a fully integrated premium cannabis producer with 8 legacy brands and over 45 products through its subsidiary WEARESDC. Based in Coalinga, California the company owns and operates a state-of-the-art cultivation facility and is currently expanding operations on the cannabis zoned property it is situated on. NGW has a seed library of over 120 strains which include multiple award-winning genetics and cultivars and is developing its nursery cloning operations with bio-tech leader Intrexon. The company also has an investment in OMG to provide it with further access to distribution throughout Colombia.  To find out more visit us at www.nextgreenwave.com or follow us on Twitter, Instagram, or LinkedIn.

On behalf of the board,

Next Green Wave Forward Looking Statements
This press release contains forward-looking statements within the meaning of applicable securities laws. All statements that are not historical facts, including without limitation, statements regarding future estimates, plans, programs, forecasts, projections, objectives, assumptions, expectations or beliefs of future performance, are “forward-looking statements.” Such forward-looking statements involve known and unknown risks, uncertainties and other factors that may cause actual results, events or developments to be materially different from any future results, events or developments expressed or implied by such forward looking statements. Such risks and uncertainties include, among others, the risk factors included in certain regulatory filings, including without limitation dependence on obtaining and maintaining regulatory approvals, including acquiring and renewing state, local or other licenses and any inability to obtain all necessary governmental approvals licenses and permits to complete construction of all proposed facilities in a timely manner; actual operating risks such as the risk of fire, pests and theft; engaging in activities which currently are illegal under US federal law and the uncertainty of existing protection from U.S. federal or other prosecution; regulatory or political change such as changes in applicable laws and regulations, including U.S. state-law legalization, particularly in California, due to inconsistent public opinion, perception of the medical-use and adult-use marijuana industry, bureaucratic delays or inefficiencies or any other reasons; any other factors or developments which may hinder market growth; NGW’s limited operating history and lack of historical profits; reliance on management; undue reliance on social media influencers to drive product sales; NGW’s requirements for additional financing, and the effect of capital market conditions and other factors on capital availability; competition, including from more established or better financed competitors; and the need to secure and maintain corporate alliances and partnerships, including with customers and suppliers. Readers are encouraged to the review the section titled “Risk Factors” in NGW’s prospectus. These factors should be considered carefully, and readers are cautioned not to place undue reliance on such forward-looking statements. Although NGW has attempted to identify important risk factors that could cause actual actions, events or results to differ materially from those described in forward-looking statements, there may be other risk factors that cause actions, events or results to differ from those anticipated, estimated or intended. There can be no assurance that forward-looking statements will prove to be accurate, as actual results and future events could differ materially from those anticipated in forward-looking statements. NGW no obligation to update any forward-looking statement, even if new information becomes available as a result of future events, new information or for any other reason except as required by law.