WE ARE NOT SOLICITING YOUR PROXY. NO VOTE OR OTHER ACTION BY THE COMPANY’S SHAREHOLDERS IS REQUIRED IN RESPONSE TO THIS INFORMATION STATEMENT.

Information Statement Pursuant to Section 14(f) of the

Securities Exchange Act of 1934 and

Notice of Proposed Change in the

Majority of the Board of Directors

On the Closing Date, Messrs. Vincent Andreula and Michael Andreula, and Ms. Kristie Andreula resigned as the Company’s officers. In addition, Mr. Vincent Andreula resigned as director on the Closing Date and his resignation is to be effective upon the 10th day after the mailing of this Information Statement to the Company’s stockholders. On the Closing Date, the Company appointed Henry C.W. Nisser as its Chief Executive Officer and a Director and David J. Katzoff as its Chief Financial Officer, Secretary and Treasurer. There is no arrangement or understanding among the newly appointed officers and directors or any other person pursuant to which they were appointed as a director and officer of the Company.

This Information Statement is being mailed to stockholders of the Company pursuant to Section 14(f) of the Securities Exchange Act of 1934, as amended (the "Exchange Act"), and Rule 14f-1 thereunder.

You are urged to read this Information Statement carefully. You are not, however, required to take any action with respect to the appointment of the new director.

CERTAIN INFORMATION REGARDING THE COMPANY

There is currently one class of voting securities of the Company entitled to be voted at a meeting, or by written consents or authorizations if no meeting is held. As of the date of this Information Statement, the Company’s authorized capital stock included 200,000,000 shares of common stock, of which 143,037,383 shares are issued and outstanding.

The following table sets forth certain information with respect to the beneficial ownership of the Company’s outstanding common stock following the consummation of the Stock Purchase Agreement by (i) any holder of more than five (5%) percent; (ii) each of the named executive officers, directors, and director nominees; and (iii) our directors, director nominees and named executive officers as a group. Except as otherwise indicated, each of the stockholders listed below has sole voting and investment power over the shares beneficially owned.

Unless otherwise indicated in the footnotes to the following table, each person named in the table has sole voting and investment power and that person’s address is c/o Imperalis Holding Corp., 11411 Southern Highlands Parkway, Suite 240, Las Vegas, NV 89141.

On the Closing Date, Messrs. Vincent Andreula and Michael Andreula, and Ms. Kristie Andreula resigned as the Company’s officers. In addition, Mr. Vincent Andreula resigned as director on the Closing Date and his resignation is to be effective upon the 10th day after the mailing of this Information Statement to the Company’s stockholders. On the Closing Date, the Company appointed Henry C.W. Nisser as its Chief Executive Officer and a Director and David J. Katzoff as its Chief Financial Officer, Secretary and Treasurer. There is no arrangement or understanding among the newly appointed officers and directors or any other person pursuant to which they were appointed as a director and officer of the Company.

Neither Messrs. Nisser or Katzoff has a direct or indirect material interest in any transaction required to be disclosed pursuant to Item 404(a) of Regulation S-K. At this time, the Company does not have any written employment agreements or other formal compensation agreements with our new officers and directors. Compensation arrangements are the subject of ongoing development and the Company will disclose any compensatory arrangements entered into in the future.

The biographical information of our current officers and directors is below:

1 Mr. Andreula resigned as Director on December 16, 2021, a resignation that is effective upon the 10th day after the mailing of the Company’s information statement on Schedule 14f-1 to the Company’s stockholders.

Set forth below is certain information with respect to the above-named officers and directors:

Henry Nisser has served as General Counsel of BitNile Holdings, Inc. (“BitNile Holdings”) since May 2019, as a Director since September 2020 and President since January 2021. Between May 2019 and January 2021, Mr. Nisser also served as Executive Vice President. BitNile Holdings is the parent company of BitNile and DPL. Mr. Nisser is also the President, General Counsel and a Director of Ault Disruptive Technologies Corporation. Mr. Nisser has served as the Executive Vice President and General Counsel of Alzamend Neuro, Inc. (“Alzamend”) on a part-time basis since May 2019, and has been a director of that company since September 2020. Mr. Nisser has also been the Executive Vice President and General Counsel of Avalanche International Corp. since May 2019. Prior to joining BitNile Holdings and these companies, Mr. Nisser practiced law at the New York law firm Sichenzia Ross Ference LLP from October 2011 to April 2019, concentrating on national and international corporate law, with a focus on U.S. federal securities law compliance, mergers and acquisitions, equity and debt financings, and corporate governance. Mr. Nisser earned a B.A. degree in international relations and economics from Connecticut College and an LL.B. from University of Buckingham School of Law in the United Kingdom.

David Katzoff has served as Senior Vice President of Finance of BitNile Holdings since January 2019. Mr. Katzoff joined Alzamend on a part-time basis in November 2019, serving as its Senior Vice President of Operations from November 2019 to December 2020, and currently serves as its Chief Operating Officer since December 2020. From 2015 to 2018, Mr. Katzoff served as Chief Financial Officer of Lumina Media, LLC, a privately-held media company and publisher of life-style publications. From 2003 to 2017, Mr. Katzoff served a Vice President of Finance of Local Corporation, a publicly-held local search company. Mr. Katzoff received a B.S. degree in Business Management from the University of California at Davis.

Vincent Andreula has served as a director since joining the Company in December 2017. Between December 2017 and December 2021, he also served as our Chief Executive Officer and Chief Financial Officer. Mr. Andreula is an entrepreneur who has owned multiple businesses. Previously, Mr. Andreula was with Spencer Edwards and served as a Vice President at Capital One; a Fortune 500 company.

Our directors are appointed for one year terms in accordance with our charter documents and hold office until the earlier of: (i) the next annual meeting of our stockholders, (ii) until they are removed from the board or (iii) until they resign.

Our directors and executive officers have not been involved in any of the following events during the past ten years:

We have no pension or compensatory plans or other arrangements which provide for compensation to our directors or officers in the event of a change in our control. There are no arrangements known to us the operation of which may at a later date result in a change in control of our company.

We have not adopted formal policies and procedures for the review, approval or ratification of related party transactions with our executive officers, directors and principal stockholders.

We do not have any independent directors.

Our management is responsible for managing risk and bringing the most material risks facing the Company to the Board’s attention. Because we do not yet have separately designated committees, the entire Board has oversight responsibility for the processes established to report and monitor material risks applicable to the Company relating to (1) the integrity of the Company’s financial statements and review and approve the performance of the Company’s internal audit function and independent accountants, (2) succession planning and risk related to the attraction and retention of talent and to the design of compensation programs and arrangements, and (3) monitoring the design and administration of the Company’s compensation programs to ensure that they incentivize strong individual and group performance and include appropriate safeguards to avoid unintended or excessive risk taking by Company employees.

There has not been any defined policy or procedure requirements for stockholders to submit recommendations or nomination for directors. The Board of Directors does not believe that a defined policy with regard to the consideration of candidates recommended by stockholders is necessary at this time because, given the early stages of the Company’s development, a specific nominating policy would be premature and of little assistance until the Company’s business operations are at a more advanced level.

Shareholder Communication with the Board

COMPENSATION OF DIRECTORS AND OFFICERS

The Company did not pay any compensation to its named executive officers in the 2020 or 2019 fiscal years.

The Company did not pay any compensation to its director in the 2020 fiscal year.

Currently, there is no equity compensation plan in place.

WHERE YOU CAN FIND ADDITIONAL INFORMATION

In accordance with Section 13 or 15(d) of the Exchange Act, the registrant caused this Report to be signed on its behalf by the undersigned, thereunto duly authorized. 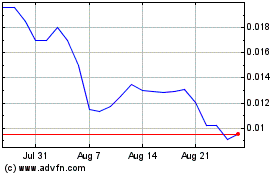 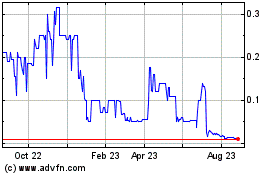 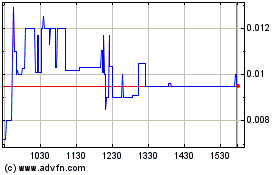