* The remainder of this cover page shall be filled out for a reporting person’s initial filing on this form with respect to the subject class of securities, and for any subsequent amendment containing information which would alter disclosures provided in a prior cover page.

* Not including the voting rights of the Series A Preferred Stock share held by Mr. Cohen as discussed below.

Item 3 is hereby amended and modified to add the additional disclosures below:

A further requirement to the terms of the Stock Purchase Agreements was that each of Mr. Alexander and Mr. Hernandez take such actions necessary and which may be requested from time to time by Mr. Cohen, to affect the cancellation of the one share of Series A Preferred Stock of the Issuer held by each of them, for no consideration (including, but not limited to, without the required payment by the Issuer of the $1 redemption price described in the designation of such Series A Preferred Stock).

(a) As of the close of business on November 17, 2020, the Reporting Persons beneficially own in aggregate 20,000,000 shares of Common Stock representing 46% of the 43,488,902 shares of the Company’s issued and outstanding Common Stock on such date (as confirmed by the Issuer’s transfer agent), which shares are held in the name of, and owned by, Cohen Enterprises, and which shares Mr. Cohen is deemed to beneficially own due to his ownership of 100% of Cohen Enterprises and his position as President thereof. Additionally, Mr. Cohen holds one (1) share of Series A Preferred Stock which has the right to vote 60% of the total vote on all shareholder matters.

(d) No other person has the right to receive or the power to direct the receipt of dividends from or the proceeds from the sale of the securities beneficially owned by the Reporting Persons.

Item 6. Contracts, Arrangements, Understandings or Relationships with Respect to Securities of the Issuer

The rights of the Issuer’s Series A Preferred Stock are described in greater detail in the Issuer’s Current Report on Form 8-K filed with the SEC on May 21, 2020, and incorporated herein by reference.

Item 7. Material to Be Filed as Exhibits 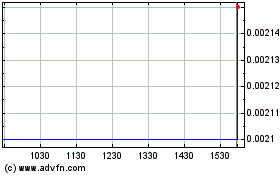