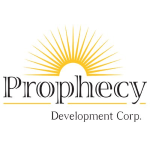 The 2018 Gibellini Preliminary Economic Assessment (PEA) outlined a 13.5-year mine life that returned a robust $338 million Net Present Value (NPV @ 7%) and 50.8% Internal Rate of Return (IRR). With a quick payback period of less than 2 years and requiring only $116 million in initial capital expenditures, the Gibellini operation could quickly become a significant global vanadium producer yielding an average of 9.65 million pounds of vanadium annually.

Thanks to its location in the mining friendly jurisdiction of Nevada, Gibellini is currently undergoing a streamlined permitting process. The initial Plan of Operation and associated environmental baseline studies have been submitted and, upon acceptance, a Notice of Intent is expected to be triggered in 2019 to prepare the project for final Environmental Impact Studies. The Company is seeking project financing in the interim and based upon the expected permitting schedule, Gibellini could become the first primary vanadium mine in the United States within a period of just over three years.

Listen to the full Interview: http://bit.ly/prophecydevelopment782019 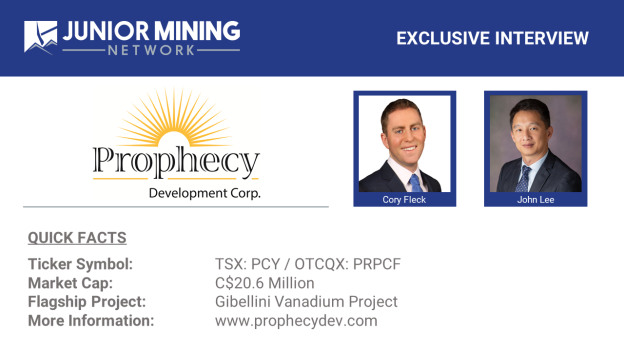 Listen to the full Interview: http://bit.ly/prophecydevelopment782019

In addition to its importance within the steel markets, vanadium is expected to experience a surge of new demand over the coming decade primarily originating from utility-scale battery storage, which in turn is directly tied to the exponential growth in renewable energy. "Vanadium is becoming more widely used in green technology applications, especially in battery technology," said the U.S. Geological Survey in its 2018 report on critical minerals and metals. The reference relates to growing excitement around vanadium redox-flow battery technology, which potentially offers a grid-scale energy storage solution for electric utilities who require long duration storage. Because of the intermittent nature of renewable energy sources such as wind and solar, long duration storage is a growing concern that will need to be addressed in order to facilitate a stable grid that could potentially become carbon free.

In 2018 the U.S. Department of the Interior released a list of 35 critical minerals, which included vanadium. Being that the U.S. government has no current stockpiles of vanadium, securing sources of this battery metal could become critical in the near future, making Prophecy's Gibellini deposit in Nevada that much more vital to the domestic security of the United States and the global vanadium supply chain.

Prophecy is developing the Gibellini project- the only large-scale, open-pit, heap-leach vanadium project of its kind in North America. Located in Nevada, Gibellini is currently undergoing EPCM and permit development. Further information on Prophecy can be found at www.prophecydev.com.

The above referenced PEA is preliminary in nature and includes inferred mineral resources that are considered too speculative geologically to have the economic considerations applied to them that would enable them to be categorized as mineral reserves, and there is no certainty that the PEA will be realized. Mineral resources are not mineral reserves and do not have demonstrated economic viability.

Some statements in this news release are about future events and performance. Such statements are based on current estimates, predictions, expectations, or beliefs. The subjects of the statements include, but are not limited to, (i) the PEA representing a viable development option for the project; (ii) construction of a mine at the project and related actions; (iii) estimates of the capital costs of constructing mine facilities, bringing the mine into production, and sustaining the mine, together with estimates of the length of financing payback periods; (iv) the estimated amount of future production, of both [raw material?] and metal recovered; and (vi) estimates of the life of the mine and of the operating and total costs, cash flow, net present value, and economic returns, including internal rate of return from an operating mine constructed at the project. All forward-looking statements are based on Prophecy's or its consultants' current beliefs and assumptions, which are in turn based on the information currently available to them. The most significant assumptions are set forth above, but generally these assumptions include: (i) the presence and continuity of vanadium mineralization at the project at the estimated grades; (ii) the geotechnical and metallurgical characteristics of the rock conforming to the sampled results; (iii) infrastructure construction costs and schedule; (iv) the availability of personnel, machinery, and equipment at the estimated prices and within the estimated delivery times; (v) currency exchange rates; (vi) vanadium sale prices; (vii) appropriate discount rates applied to the cash flows in the economic analysis; (viii) tax rates applicable to the proposed mining operation; (ix) the availability of acceptable financing on reasonable terms; (x) projected recovery rates and use of a process method, which although well-known and proven with other commodity types, such as copper, has not been previously brought into production for a vanadium project; (xi) reasonable contingency requirements; (xii) success in realizing proposed operations; and (xiii) assumptions that the project's environmental approval and permitting is forthcoming from county, state, and federal authorities. The economic analysis is partly based on Inferred Mineral Resources that are considered too speculative geologically to have the economic considerations applied to them that would enable them to be categorized as Mineral Reserves, and there is no certainty that the PEA based on these Mineral Resources will be realized. Currently there are no Mineral Reserves on the Gibellini property. Although the Company's management and its consultants consider these assumptions to be reasonable, given the information currently available to them, they could prove to be incorrect. Many forward-looking statements are made assuming the correctness of other forward-looking statements, such as statements of net present value and internal rates of return. Those statements are based in turn on most of the other forward-looking statements and assumptions made herein. The cost information is also prepared using current values, but the time for incurring the costs is in the future and it is assumed costs will remain stable over the relevant period.

Junior Mining Network (''JMN'') is not a financial advisory or advisor, investment advisor or broker-dealer and does not undertake any activities that would require such registration. The information contained herein is not intended to be used as the basis for investment decisions and should not be considered as investment advice or a recommendation, nor is the information an offer or solicitation to buy, hold or sell any security. JMN does not represent or warrant that the information posted is accurate, unbiased or complete and make no representations as to the completeness or timeless of the material provided. JMN receives fees for producing content on financial news and has been compensated $750 by Prophecy Development Corp. to publish this interview. Investors should consult with an investment advisor, tax and legal consultant before making any investment decisions. All materials are subject to change without notice.