The Dow Jones Industrial Average fell 0.2%. The S&P 500 was little changed and the Nasdaq Composite lost 0.4%.

Shares of technology giants have taken back control of the rally in U.S. stocks over the past month, helping to push major indexes to a series of records. Investors' concerns about owning shares that are sensitive to rising interest rates have been assuaged by a retreat in yields on U.S. government bonds. Some say the shift into economically sensitive sectors went too far at a time when major economies such as the European Union and India are grappling with fresh coronavirus outbreaks.

Shares of Nuance Communications jumped 16% after Microsoft said it agreed to acquire the speech-recognition firm for $19.7 billion.

Meanwhile, Ingersoll-Rand shares fell 0.8% after the manufacturer said it had agreed to sell its unit that makes golf carts and other vehicles to Platinum Equity for $1.68 billion.

U.S. crude oil added 0.6% to $59.70 a barrel. The Organization of the Petroleum Exporting Countries is due to release a regular forecast of global supply and demand of oil Tuesday.

In overseas markets, the Stoxx Europe 600 edged down 0.5%, pressured by declines in shares of travel & leisure companies.

Among individual European equities, shares of Suez rose roughly 7.7% in Paris after the French waste- and water-management company said Monday that it had agreed to merge with Veolia Environnement.

Akane Otani contributed to this article 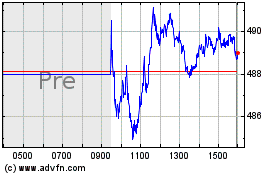