76.54
0.21 (0.28%)
Upgrade to Real-Time
Afterhours (Closed)
76.54
Current Report Filing (8-k)
February 22 2021 - 04:37PM
Edgar (US Regulatory)
0000100493false00001004932021-02-212021-02-22iso4217:USDxbrli:shares
UNITED STATES
SECURITIES AND EXCHANGE COMMISSION
WASHINGTON, D.C. 20549
FORM 8-K
Current Report Pursuant to Section 13 or 15(d) of the
Securities Exchange Act of 1934
Date of Report (Date of Earliest Event Reported): February 21, 2021
TYSON FOODS, INC.
(Exact name of Registrant as specified in its charter)
(479) 290-4000
(Registrant's telephone number, including area code)
Not applicable
(Former name or former address, if changed since last report)
___________________________________
Check the appropriate box below if the Form 8-K filing is intended to simultaneously satisfy the filing obligation of the registrant under any of the following provisions (see General Instruction A.2. below):
☐    Written communications pursuant to Rule 425 under the Securities Act (17 CFR 230.425)
☐    Soliciting material pursuant to Rule 14a-12 under the Exchange Act (17 CFR 240.14a-12)
☐    Pre-commencement communications pursuant to Rule 14d-2(b) under the Exchange Act (17 CFR 240.14d-2(b))
☐    Pre-commencement communications pursuant to Rule 13e-4(c) under the Exchange Act (17 CFR 240.13e-4(c))
Securities Registered Pursuant to Section 12(b) of the Act:
Class B stock is not publicly listed for trade on any exchange or market system. However, Class B stock is convertible into Class A stock on a share-for-share basis.
Indicate by check mark whether the registrant is an emerging growth company as defined in as defined in Rule 405 of the Securities Act of 1933 (§230.405 of this chapter) or Rule 12b-2 of the Securities Exchange Act of 1934 (§240.12b-2 of this chapter). Emerging growth company ☐
If an emerging growth company, indicate by check mark if the registrant has elected not to use the extended transition period for complying with any new or revised financial accounting standards provided pursuant to Section 13(a) of the Exchange Act. ☐
Item 5.02. Departure of Directors or Certain Officers; Election of Directors; Appointment of Certain Officers; Compensatory Arrangements of Certain Officers.
(c) On February 21, 2021, Tyson Foods, Inc. (the “Company”) appointed Donnie King as the Company’s Chief Operating Officer, effective February 22, 2021. In this newly created position, Mr. King will report to Dean Banks, the Company’s President and Chief Executive Officer, and will also continue to serve as the Company’s Group President Poultry. In addition, the Group Presidents of the Company’s Fresh Meats, Prepared Foods and International business segments, as well as the Company’s Chief Customer Officer, will report to Mr. King.
Mr. King, 59, who has more than 35 years of experience, has served as the Company’s Group President Poultry since September 2020. Prior to that, he served as Group President, International and Chief Administration Officer since February 2019 and as Group President, International since January 2019. Mr. King previously served as President, North American Operations from 2015 to 2016 and President, North American Operations and Foodservice in 2014. Mr. King was initially employed by Valmac Industries in 1982. Valmac Industries was acquired by the Company in 1984. Mr. King was self-employed from 2016 to February 2019 before returning to the Company. Mr. King holds a bachelor’s degree in business management from the University of Arkansas at Monticello.
In connection with Mr. King’s appointment, the Compensation and Leadership Committee of the Company’s Board of Directors approved an award to Mr. King under the Company’s 2000 Stock Incentive Plan consisting of a one-time grant of restricted stock with a fair market value of $214,000 on the date of grant. The award will be made four days after the Company’s next quarterly earnings release and will vest on the third anniversary of the grant date, subject to the terms and conditions of the award agreement. Mr. King will also continue to be eligible to participate in the Company’s general benefit plans and certain executive benefits for which he was already eligible as a member of the Company’s senior management, such as the Company’s Executive Savings Plan and Executive Rewards Allowance. For more information about the Company’s executive compensation program, including a description of each plan identified above, please refer to the Company’s proxy statement filed with the U.S. Securities and Exchange Commission on December 23, 2020.
Mr. King has no family relationships or related party transactions with the Company that would require disclosure under Items 401(d) or 404(a) of Regulation S-K in connection with his appointment described above.
A copy of the press release announcing the appointment of Mr. King as the Company’s Chief Operating Officer as part of certain organizational changes being announced by the Company is attached as Exhibit 99.1 to this Current Report on Form 8-K and is incorporated herein by reference.
Item 9.01. Financial Statements and Exhibits.
(d)Exhibits
2
SIGNATURE
Pursuant to the requirements of the Securities Exchange Act of 1934, the registrant has duly caused this report to be signed on its behalf by the undersigned hereunto duly authorized. 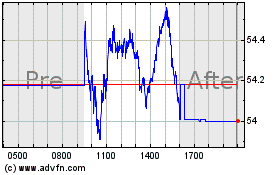