STMicroelectronics NV's guidance for the second quarter assumes the euro will average $1.18 against the dollar, a lower rate than its first-quarter assumption of $1.20 and weaker than the euro's current level.

STMicroelectronics forecasts second-quarter net revenue of $2.9 billion at the midpoint, and a gross margin of about 39.5%.

"This outlook is based on an assumed effective currency exchange rate of approximately $1.18 = €1.00 for the 2021 second quarter and includes the impact of existing hedging contracts," the European chip maker said.

The company had factored in an exchange rate of approximately $1.20 at the end of January when it issued guidance for the first quarter.

The euro's closing level on March 31 was $1.1731, according to FactSet. It has risen since then, reaching a two-month high of 1.2151 earlier Thursday. 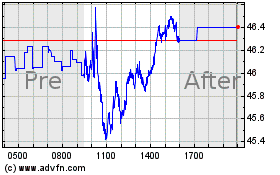