DALLAS, June 1, 2021 /PRNewswire/ -- Southwest Airlines Co. (NYSE: LUV) (the "Company") is celebrating its 50th Anniversary this year, with June 18 marking 50 years since the carrier's first commercial flight. To celebrate, Southwest® has declared June 18 as Wanna Get Away Day and has registered the day with the National Day Calendar. In 1996, Southwest coined the phrase "Wanna Get Away®" to highlight the Company's expansion, as well as creating humorous moments relevant to its Customers within its marketing. As Wanna Get Away has become an iconic and recognized expression for the brand, Southwest took it a step further to celebrate its 50th Anniversary by announcing this new annual day. Beginning today, Customers have the chance to engage with Southwest throughout the month of June, with its biggest surprises occurring on its anniversary and newly-branded day. 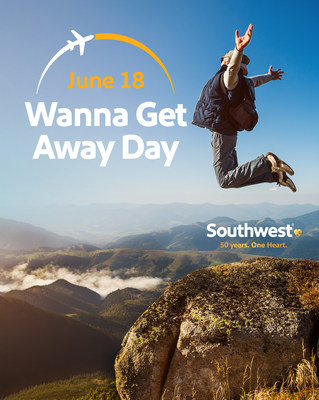 No one knows how to throw a party like Southwest Airlines. Southwest Employees will celebrate this milestone, and Customers will be able to participate in the fun. In celebration of Southwest's 50th Anniversary, the carrier is giving Customers the chance to win a total of 50 million Rapid Rewards® bonus points from June 1, 2021, through June 18, 2021.* Customers will have daily opportunities to win Rapid Rewards bonus points, with Southwest gift cards, and Companion Passes also up for grabs on June 18. Visit Southwest50.com/WannaGetAway to view full terms and conditions and to enter for a chance to win.

"It's our 50th Anniversary and we are ready to celebrate and thank our Customers," said Bill Tierney, Southwest Airlines Vice President of Marketing. "In true Southwest Spirit, we are turning our 50th Anniversary into Wanna Get Away Day, allowing Customers the opportunity to celebrate our 50-year history of Heart, low-fares, legendary Hospitality, and flexible policies by giving them opportunities to turn 'Wanna get away' into 'Gonna' get away."

Turn "Wanna Get Away" into "Gonna Get Away"
As travel demand returns, this celebration is an opportunity to encourage Customers to reconnect with the People and places they love, and turn those travel dreams into a reality. Southwest's Purpose is to connect People to what's important in their lives, and the carrier is excited to celebrate this national day with its Customers, and most importantly turn their "wannas" into "gonnas."

Continuing the Celebration
Southwest is celebrating all month long with its Employees and Customers. Starting today, Southwest will have pop-up photo opportunities in 24 airport gate areas across the nation and Heart Carts full of swag and fun giveaways in more than 40 of its locations. And who can forget Southwest's famous gate games featuring its amazing Employees? The fun doesn't stop at the gate—Southwest's Inflight Crews will be surprising and delighting Customers with additional swag on June 18.

Speaking of swag, take a trip down memory lane with Southwest's 50th Anniversary collection including its retro merchandise, throughout 2021 at Southwest: The Store. The carrier is celebrating its golden year with a Retro Hostess Build-A-Bear now available for sale exclusively at Southwest: The Store. The official Build-A-Bear furry friend commemorates the original Southwest Airlines' Hostesses, now called Flight Attendants, in an iconic orange, white, and red outfit, reminiscent of the Hot Pants uniform of the early days. Other new featured merchandise available the week of Southwest's 50th Anniversary (beginning June 14) include a silk 70s Retro Hostess Scarf (to match the Retro Hostess Build-A-Bear, of course), Southwest Birthday T-shirts, Southwest 50th Anniversary pin, and much more!

Stay tuned to Southwest.com for more details about the surprises to come. To learn more about Southwest's 50th Anniversary and five-decade-long history of friendly, reliable, and low-cost air travel, visit Southwest50.com.

*SOUTHWEST AIRLINES SWEEPSTAKES TERMS
NO PURCHASE NECESSARY TO ENTER OR WIN. A PURCHASE WILL NOT INCREASE YOUR CHANCES OF WINNING. Open to legal residents of 50 United States and the District of Columbia (excluding Alaska) age 18 or older at time of entry. Void where prohibited. Limit one entry per person. All fields must be completed. For complete details and Official Rules, visit Southwest50.com/wannagetaway. By submitting this entry, you agree to the Official Rules. By entering, information collected will be used in accordance with the Sponsor's Privacy Policy at Southwest.com/privacy. Sponsor: 2702 Love Field Drive HDQ 5MC, Dallas, TX 75235. Enter by June 18, 2021, 11:58:59 pm Pacific Daylight Time. Points and Companion Pass® bookings do not include taxes and fees of at least $5.60 per one-way flight.

ABOUT SOUTHWEST AIRLINES CO.
In its 50th year of service, Dallas-based Southwest Airlines Co. continues to differentiate itself from other air carriers with exemplary Customer Service delivered by more than 56,000 Employees to a Customer base that topped 130 million Passengers in 2019. Southwest has a robust network of point-to-point service with a strong presence across top leisure and business markets. In peak travel seasons during 2019, Southwest operated more than 4,000 weekday departures among a network of 101 destinations in the United States and 10 additional countries. In 2020, the carrier added service to Hilo, Hawaii; Cozumel, Mexico; Miami; Palm Springs, Calif.; Steamboat Springs; and Montrose (Telluride/Crested Butte), Colo. Thus far in 2021, Southwest has initiated service to Chicago (O'Hare) and Sarasota/ Bradenton, both on Feb. 14; Savannah/Hilton Head and Colorado Springs, Colo., both on March 11; Houston (Bush) and Santa Barbara, Calif., both on April 12; Fresno, Calif., on April 25; Destin/Fort Walton Beach on May 6;  Myrtle Beach S.C., on May 23; as well as Bozeman, Mont., on May 27; and will begin service to Jackson, Miss., on June 6; and Eugene, Ore., on Aug. 29. The Company also has announced an intention to initiate new service to Bellingham, Wash., later this year.

The carrier issued its Southwest® Promise in May 2020 to highlight new and round-the-clock efforts to support its Customers and Employees well-being and comfort. Among the changes are enhanced cleaning efforts at airports and onboard aircraft, along with a federal mandate requiring every person to wear a mask at all times throughout each flight. Additional details about the Southwest Promise are available at Southwest.com/Promise.

Southwest coined Transfarency® to describe its purposed philosophy of treating Customers honestly and fairly, and low fares actually staying low. Southwest is the only major U.S. airline to offer bags fly free® to everyone (first and second checked pieces of luggage, size and weight limits apply, some carriers offer free checked bags on select routes or in qualified circumstances). Southwest does not charge change fees, though fare differences might apply.

Southwest is one of the most honored airlines in the world, known for a triple bottom line approach that contributes to the carrier's performance and productivity, the importance of its People and the communities they serve, and an overall commitment to efficiency and the planet. Learn more about how the carrier gives back to communities across the world by visiting Southwest.com/citizenship.

Book Southwest Airlines' low fares online at Southwest.com or by phone at 1-800-I-FLY-SWA®.