DALLAS, May 25, 2021 /PRNewswire/ -- Southwest Airlines Co. (NYSE: LUV) (the "Company") last week showcased its Mile High Heart for the Denver metro area surrounding counties with its Destination: Vaccination activation, from  May 16, 2021, through May 20, 2021, at Dicks Sporting Goods Park, home of the Colorado Rapids. With dozens of Employee volunteers, the Company partnered with the State of Colorado, in its collaboration with Centura Health, to contribute to an effort focused on getting Coloradans vaccinated—allowing them to get back to the things they love. In attendance to support this initiative was Governor Jared Polis, as well as Peter D. Banko, Centura Health CEO; and Shauna Gulley, MD, Centura Chief Clinical Officer. 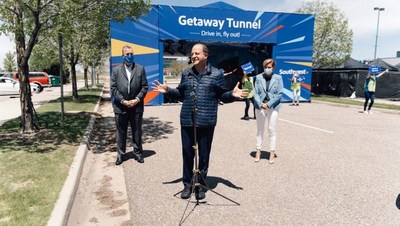 "Southwest proudly supports the vaccination efforts taking place around the country. We are excited to have played a small part in showing our Mile High Heart for the city of Denver and its surrounding communities," said Helen Limpitlaw, Director of Marketing at Southwest Airlines. "We look forward to celebrating those special moments with the people we love at the places that matter most in their lives."

Celebrating Moments with Southwest Getaway Tunnel
In true Southwest Spirit, the airline turned the moments that followed the vaccinations into a celebration, through its 45 ft. (length) by 34 ft. (width) Southwest Getaway Tunnel; a drive-thru experience, which featured music and destination centric videos on large LED screens, creating excitement for reuniting people with the places they've missed. 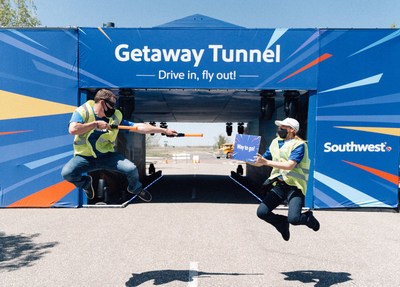 Making a Difference, One Shot at a Time
In support of the vaccinations, Southwest invites participants to share their joy from being fully vaccinated, by posting a vaccine selfie on their Facebook page, or tag @SouthwestAir on Twitter and Instagram—don't forget to include #SouthwestHeart. 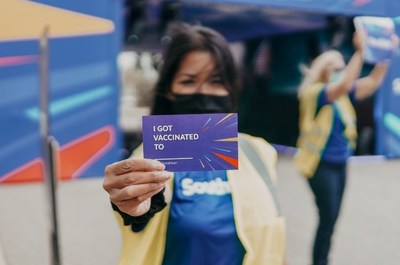 ABOUT SOUTHWEST AIRLINES CO.
In its 50th year of service, Dallas-based Southwest Airlines Co. continues to differentiate itself from other air carriers with exemplary Customer Service delivered by more than 56,000 Employees to a Customer base that topped 130 million Passengers in 2019. Southwest has a robust network of point-to-point service with a strong presence across top leisure and business markets. In peak travel seasons during 2019, Southwest operated more than 4,000 weekday departures among a network of 101 destinations in the United States and 10 additional countries. In 2020, the carrier added service to Hilo, Hawaii; Cozumel, Mexico; Miami; Palm Springs, Calif.; Steamboat Springs; and Montrose (Telluride/Crested Butte), Colo. Thus far in 2021, Southwest has initiated service to Chicago (O'Hare) and Sarasota/ Bradenton, both on Feb. 14; Savannah/Hilton Head and Colorado Springs, Colo., both on March 11; Houston (Bush) and Santa Barbara, Calif., both on April 12; Fresno, Calif., on April 25; Destin/Fort Walton Beach on May 6; as well as Myrtle Beach S.C., on May 23; and will begin service to Bozeman, Mont., on May 27; Jackson, Miss., on June 6; and Eugene, Ore., on Aug. 29. The Company also has announced an intention to initiate new service to Bellingham, Wash., later this year.

The carrier issued its Southwest® Promise in May 2020 to highlight new and round-the-clock efforts to support its Customers and Employees well-being and comfort. Among the changes are enhanced cleaning efforts at airports and onboard aircraft, along with a federal mandate requiring every person to wear a mask at all times throughout each flight. Additional details about the Southwest Promise are available at Southwest.com/Promise.

Southwest coined Transfarency® to describe its purposed philosophy of treating Customers honestly and fairly, and low fares actually staying low. Southwest is the only major U.S. airline to offer bags fly free® to everyone (first and second checked pieces of luggage, size and weight limits apply, some carriers offer free checked bags on select routes or in qualified circumstances). Southwest does not charge change fees, though fare differences might apply.

Southwest is one of the most honored airlines in the world, known for a triple bottom line approach that contributes to the carrier's performance and productivity, the importance of its People and the communities they serve, and an overall commitment to efficiency and the planet. Learn more about how the carrier gives back to communities across the world by visiting Southwest.com/citizenship.

Book Southwest Airlines' low fares online at Southwest.com or by phone at 1-800-I-FLY-SWA®.