The Company’s summarized financial information is as follows:

“As we reflect upon our Fiscal 2022 second quarter performance, we are pleased with the resilience and strength of Saratoga and our portfolio companies. For the second quarter in a row, our NAV per share of $28.97 has reached an historic high for us, and we continue to believe Saratoga is well positioned for potential future economic opportunities and challenges,” said Christian L. Oberbeck, Chairman, Chief Executive Officer and President of Saratoga Investment. “Our second quarter results continue to highlight the strength of our financial position and portfolio performance. These quarterly metrics include LTM return on equity of 14.4%, adjusted NII per share of $0.63, and NAV per share quarterly growth of $0.27 per share, or 1%. While we see a substantial ramp-up in market activity, we continue to believe that balance sheet and liquidity strength, and NAV preservation, remains paramount both for our BDC and our portfolio companies. Our current capital structure at quarter-end was strong, with $324 million of equity supporting $238 million of long-term and covenant-free non-SBIC debt and $172 million of long-term covenant free SBIC debentures. Our quarter-end regulatory leverage of 236% provides substantial cushion above our 150% requirement, and in addition to the $45 million we have available through our revolving credit facility, we have $73 million of quarter-end cash to support our existing portfolio companies, and $111 million of available SBIC II facilities to finance new opportunities. When deployed, we expect all of this capital to be highly accretive to earnings. In addition, in July we raised an additional $125 million of new unsecured bonds at an effective yield of 4.125% while repaying our existing $60 million 6.25% SAF baby bonds, adding further liquidity and reducing our existing cost of capital by over 200 basis points. And just this week we closed a new $50 million credit facility with Encina Lender Finance, replacing our existing Madison facility and further reducing our cost of capital on this form of capital by 100 basis points. These results allowed our Board of Directors in August to increase our quarterly dividend by 8c per share, or 18%, and declare a 52c per share dividend for the quarter ended August 31, 2021 – an endorsement of the current strength of our portfolio performance.”

“As always, we continue to remain prudent and discerning in terms of originations in the current environment. Identifying numerous strong opportunities recently, this quarter was again a big one for us in terms of originations, almost matching our record Q1 quarter. At the same time, we had a record repayments quarter as well, including a $6.4 million realized gain on our Passageways equity investment. We continue to bring new platform investments into the portfolio, with investments in four new companies added this fiscal quarter, in addition to the success we continue to have with follow-ons in existing borrowers with strong business models and balance sheets. Total originations in Q2 totaled $116 million invested, outpaced by record repayments of $135 million. Our credit quality remained at a high level at quarter-end, with 93% of credits rated in our highest category, with no credits remaining on non-accrual. With 74% of our investments at quarter-end in first lien debt and generally supported by strong enterprise values and balance sheets in industries that have historically performed well in stressed situations, we believe our portfolio is well structured for future market conditions. We remain confident in our experienced management team, high underwriting standards and ability to steadily grow portfolio size and maintain quality and investment performance over the long-term.”

Discussion of Financial Results for the Quarter ended August 31, 2021:

As of August 31, 2021, Saratoga Investment’s assets under management (“AUM”) was $666.1 million, an increase of 31.1% from $508.1 million as of August 31, 2020, and a decrease of 1.7% from $677.8 million as of May 31, 2021. The decrease this past quarter consists of $116.0 million in originations, offset by $134.8 million of repayments and amortizations, reflecting both continued strong pace of originations as well as the ongoing lumpy nature of repayments. In addition, the fair value of the portfolio increased by $1.5 million of realized gains and $3.4 million of unrealized appreciation, representing an increase of 0.7% to the overall portfolio, driven by the impact of changes to market spreads, EBITDA multiples and/or revised portfolio company performance on the quarter-end valuations. Saratoga Investment’s portfolio remains strong, with 74.1% of the portfolio in first liens, and a continued high level of investment quality in loan investments, with 93.2% of its loans this quarter at its highest internal rating. Saratoga Investment’s portfolio has a fair value that is 3.8% in excess of its cost basis. This quarter’s originations include four investments in new platforms, and six follow-ons in existing portfolio companies, including drawdowns on committed facilities. Since Saratoga Investment took over the management of the BDC, $698.0 million of repayments and sales of investments originated by Saratoga Investment have generated a gross unlevered IRR of 16.1%.

For the three months ended August 31, 2021, total investment income of $18.4 million increased by $4.5 million, or 33.1%, when compared to $13.9 million for the three months ended August 31, 2020. This quarter’s investment income was generated from an investment base that has grown by 31.1% since last year. This asset growth was offset by lower interest rates, with the weighted average current coupon on non-CLO BDC investments decreasing from 9.9% to 9.0% year-over-year. In addition, this quarter’s investment income was up 9.7% on a quarter-on-quarter basis from $16.8 million for the quarter ended May 31, 2021, primarily due to the full-period impact of originations closed last quarter, as well as the release of the $0.6 million interest reserve to interest income for the Taco Mac investment that returned to accrual status this quarter.

For the fiscal quarter ended August 31, 2021, Saratoga Investment invested $116.0 million in four new and six existing portfolio companies and had $134.8 million in aggregate amount of exits and repayments, including realized gains, resulting in net repayments of $18.8 million for the quarter.

As of August 31, 2021, Saratoga Investment had no outstanding borrowings under its $45 million senior secured revolving credit facility with Madison Capital Funding LLC. At the same time, Saratoga Investment had $108.0 million SBA debentures in its SBIC I license outstanding, $64.0 million in SBA debentures in its SBIC II license outstanding, $43.1 million of listed baby bonds issued, an unsecured unlisted $175.0 million institutional bond issuance, upsized this past quarter by $125.0 million, and three unlisted issuances of $20.0 million in total, and an aggregate of $73.3 million in cash and cash equivalents.

With $45.0 million available under the credit facility and the $73.3 million of cash and cash equivalents as of August 31, 2021, Saratoga Investment has a total of $118.3 million of undrawn borrowing capacity and cash and cash equivalents for new investments or to support its existing portfolio companies in the BDC. In addition, Saratoga Investment has $111.0 million in undrawn SBA debentures from the most recently approved SBIC II license to finance new SBIC-eligible portfolio companies. During the quarter, the Company dropped down another $3.5 million into its SBIC II license, increasing its capital there from $84.0 million to the maximum allowable $87.5 million. Availability under the Madison credit facility can change depending on portfolio company performance and valuation. In addition, certain follow-on investments in SBIC I and the BDC will not qualify for SBIC II funding. As of quarter-end, Saratoga Investment had $15.5 million of committed undrawn lending commitments and $43.2 million of discretionary funding commitments.

On August 28, 2021, the Company redeemed $60.0 million in aggregate principal amount of issued and outstanding 2025 Notes. The 2025 Notes were listed on the NYSE under the trading symbol “SAF” with a par value of $25.00 per share, and have been delisted following the redemption.

The Company has formed a wholly-owned special purpose entity, Saratoga Investment Funding II LLC, a Delaware limited liability company (“SIF II”), for the purpose of entering into a $50.0 million senior secured revolving credit facility with Encina Lender Finance, LLC (the “Lender”), supported by loans held by SIF II and pledged to the Lender under the credit facility. This facility closed on October 4, 2021. During the first two years following the closing date, SIF II may request an increase in the commitment amount to up to $75.0 million. The terms of the credit facility require a minimum drawn amount of $12.5 million at all times during the first six months following the closing date, which increases to the greater of $25.0 million or 50% of the commitment amount in effect at any time thereafter. The term of the credit facility is three years. Advances under the credit facility bear interest at a floating rate per annum equal to LIBOR plus 4.0%, with LIBOR having a floor of 0.75%, with customary provisions related to the selection by the Lender and the Company of a replacement benchmark rate. Concurrently with the closing of this credit facility, all remaining amounts outstanding on the Company’s existing revolving credit facility with Madison Capital Funding, LLC was repaid and the facility terminated.

On July 30, 2021, we entered into an equity distribution agreement with Ladenburg Thalmann & Co. Inc. and Compass Point Research and Trading, LLC, through which we may offer for sale, from time to time, up to $150.0 million of our common stock through an ATM offering. As of and for the three months ended August 31, 2021, the Company sold 5,441 shares for gross proceeds of $0.2 million at an average price of $28.86 for aggregate net proceeds of $0.2 million (net of transaction costs).

On August 26, 2021, Saratoga Investment announced that its Board of Directors declared a quarterly dividend of $0.52 per share for the fiscal quarter ended August 31, 2021, payable on September 28, 2021, to all stockholders of record at the close of business on September 14, 2021.

Shareholders have the option to receive payment of dividends in cash or receive shares of common stock, pursuant to the Company’s DRIP.

Saratoga Investment is a specialty finance company that provides customized financing solutions to U.S. middle-market businesses. The Company invests primarily in senior and unitranche leveraged loans and mezzanine debt, and, to a lesser extent, equity to provide financing for change of ownership transactions, strategic acquisitions, recapitalizations and growth initiatives in partnership with business owners, management teams and financial sponsors.  Saratoga Investment's objective is to create attractive risk-adjusted returns by generating current income and long-term capital appreciation from its debt and equity investments. Saratoga Investment has elected to be regulated as a business development company under the Investment Company Act of 1940 and is externally-managed by Saratoga Investment Advisors, LLC, an SEC-registered investment advisor focusing on credit-driven strategies. Saratoga Investment owns two SBIC-licensed subsidiaries and manages a $650 million collateralized loan obligation ("CLO") fund. It also owns 52% of the Class F and 100% of the subordinated notes of the CLO. The Company's diverse funding sources, combined with a permanent capital base, enable Saratoga Investment to provide a broad range of financing solutions.

Saratoga Investment (NYSE:SAR)
Historical Stock Chart
From Apr 2022 to May 2022 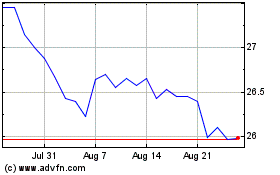 Saratoga Investment (NYSE:SAR)
Historical Stock Chart
From May 2021 to May 2022 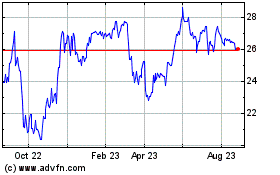 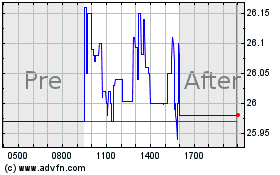