1.07
-0.09 (-7.76%)
Upgrade to Real-Time
Afterhours (Closed)
1.07
Proxy Statement (definitive) (def 14a)
May 02 2022 - 05:22PM
Edgar (US Regulatory)
UNITED STATES
SECURITIES AND EXCHANGE COMMISSION
Washington, D.C. 20549
SCHEDULE 14A
Proxy Statement Pursuant to Section 14(a) of the Securities Exchange Act of 1934
(Amendment No.   )
Filed by the Registrant ☒
Filed by a Party other than the Registrant  ☐
Check the appropriate box:
OWLET, INC.
Name of the Registrant as Specified In Its Charter
Payment of Filing Fee (Check the appropriate box):

Owlet, Inc.
3300 North Ashton Boulevard, Suite 300
Lehi, Utah 84043
May 2, 2022
Dear Fellow Shareholders:
I am pleased to invite you to attend the 2022 Annual Meeting of Shareholders (the “Annual Meeting”) of Owlet, Inc. on Friday, June 17, 2022 at 1:00 p.m. (Eastern Time). Our Annual Meeting will be completely virtual, and you will not be able to attend the Annual Meeting in person. We believe this format will provide a consistent experience for our shareholders and allows all shareholders with Internet connectivity to participate in the Annual Meeting regardless of location. Our Annual Meeting will be conducted via live webcast, and shareholders will be able to attend, vote and submit questions via the Internet during the webcast. You can access the Annual Meeting at www.virtualshareholdermeeting.com/OWLT2022.
This year, we are using the “Notice and Access” method of providing proxy materials to our shareholders by electronic delivery via the Internet. We believe electronic delivery expedites your receipt of and provides convenient access to our proxy materials, reduces the environmental impact of the Annual Meeting and reduces proxy material printing and distribution costs. Under this method, we have sent a Notice of Internet Availability of Proxy Materials (the “Notice & Access Card”) to shareholders of record as of the close of business on record date. The notice contains instructions on how to access our 2022 Proxy Statement (the “Proxy Statement”) and 2021 Annual Report and vote electronically on the Internet. This notice and our Proxy Statement also contain instructions on how to request and receive a printed copy of our proxy materials if you prefer.
To attend and participate in the Annual Meeting, visit www.virtualshareholdermeeting.com/OWLT2022 or follow the instructions provided by your bank or broker. Please be advised that only shareholders who held Owlet shares as of the close of business on the April 22, 2022 record date are entitled to notice of and will be permitted to attend, participate and vote at the Annual Meeting. Your proxy card, voting instruction form or Notice & Access Card will include a 16-digit control number. Upon entering your control number online, you will receive further instructions, including unique hyperlinks that will allow you to access, submit questions and vote at the virtual Annual Meeting.
Whether or not you plan to attend the Annual Meeting, we encourage you to vote. It is important that your shares be represented and voted at the Annual Meeting. Please promptly cast your vote by telephone or electronically via the Internet, or, if you requested to receive printed proxy materials, by completing and returning your signed proxy card in the enclosed postage-paid envelope or to the address indicated on your proxy card or voting instruction form. Voting electronically, by telephone or by returning your proxy card does not deprive you of the right to attend the Annual Meeting virtually and vote your shares during the Annual Meeting for the business matters acted upon. Additional attendance, participation and voting information is included in the Proxy Statement and with your proxy materials.
As co-founder and Chief Executive Officer of Owlet, I am inspired by our customers and deeply committed to helping parents find joy and extra peace of mind in parenting through our connected and accessible nursery ecosystem. As you know, Owlet became a publicly traded company in July 2021, and we are incredibly proud of our resilient team and how we navigated those challenges while executing our mission and remaining focused on Owlet’s growth. On behalf of the Board of Directors and management, we appreciate your continued support, confidence and investment in Owlet, Inc. 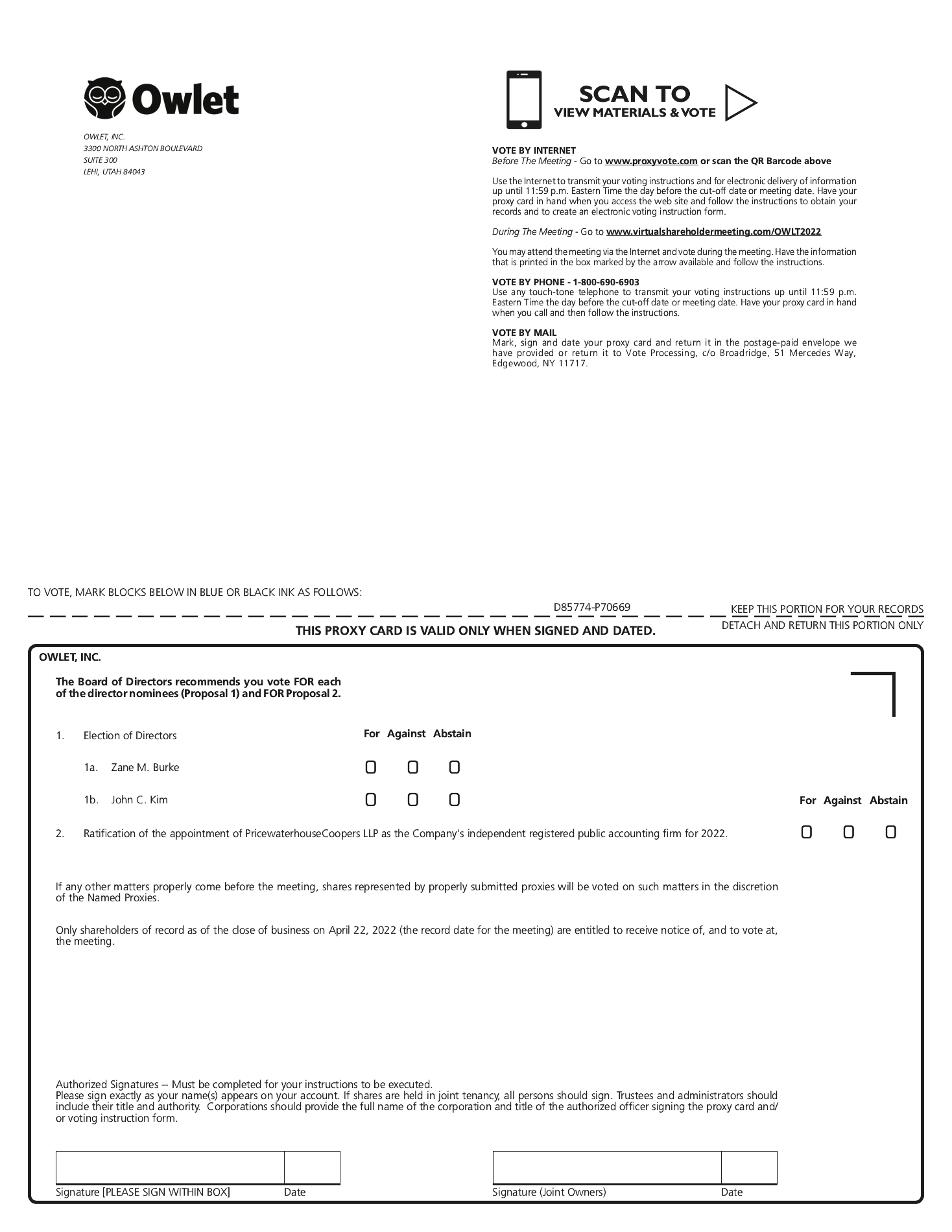 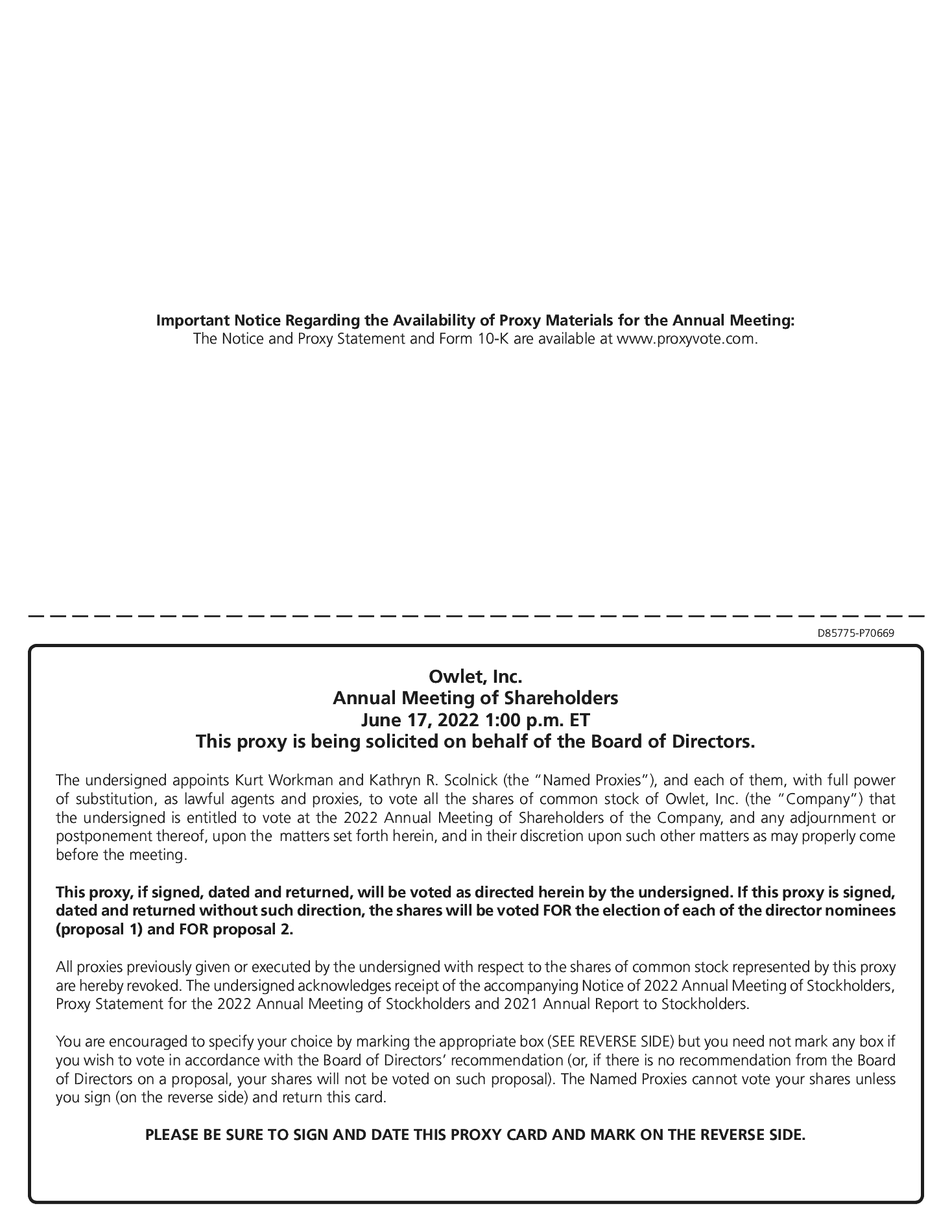 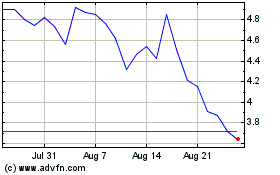 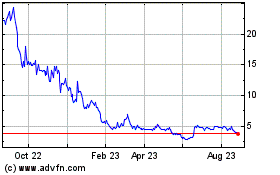