If the filing person has previously filed a statement on Schedule 13G to report the acquisition that is the subject of this Schedule 13D, and is filing this schedule because of Rule 13d-1(e), 13d-1(f) or 13d-1(g), check the following box. [ ]

NOTE: Schedules filed in paper format shall include a signed original and five copies of the schedule, including all exhibits. See Rule 13d-7 for other parties to whom copies are to be sent.

This statement on Schedule 13D relates to the shares (“Shares”) of common stock, par value $0.001 per share, of New Relic, Inc., a Delaware corporation (the “Issuer”). The principal executive office of the Issuer is located at 188 Spear Street, Suite 1000, San Francisco, CA 94105.

(a) This statement is filed by JANA Partners LLC, a Delaware limited liability company (“JANA”, or the “Reporting Person”). JANA is a private money management firm which holds Shares of the Issuer in various accounts under its management and control. The principal owner of JANA is Barry Rosenstein (the “Principal”).

(c) The principal business of JANA and the Principal is investing for accounts under their management.

(d) Neither the Reporting Person nor the Principal has, during the last five years, been convicted in a criminal proceeding (excluding traffic violations or similar misdemeanors).

(e) Neither the Reporting Person nor the Principal has, during the last five years, been a party to a civil proceeding of a judicial or administrative body of competent jurisdiction and as a result of such proceeding was or is subject to a judgment, decree or final order enjoining future violations of, or prohibiting or mandating activities subject to, federal or state securities laws or finding any violation with respect to such laws.

(f) JANA is a limited liability company organized in Delaware. The Principal is a citizen of the United States of America.

The 3,529,118 Shares reported herein by JANA were acquired at an aggregate purchase price of approximately $184.1 million. Such Shares were acquired with investment funds in accounts managed by JANA and margin borrowings described in the following sentence. Such Shares are held by the investment funds managed by JANA in commingled margin accounts, which may extend margin credit to JANA from time to time, subject to applicable federal margin regulations, stock exchange rules and credit policies. In such instances, the positions held in the margin accounts are pledged as collateral security for the repayment of debit balances in the account. The margin accounts bear interest at a rate based upon the broker’s call rate from time to time in effect. Because other securities are held in the margin accounts, it is not possible to determine the amounts, if any, of margin used to purchase the Shares reported herein.

The Reporting Person acquired the Shares because it believes the Shares are undervalued and represent an attractive investment opportunity.

On June 6, 2022, JANA entered into a cooperation agreement with the Issuer (the “Cooperation Agreement”). Pursuant to the Cooperation Agreement, (i) on June 13, 2022, each of Kevin Galligan, a Partner of JANA, (the “JANA Nominee”) and Susan D. Arthur (the “Mutual Nominee” and, together with the JANA Nominee, the “Agreed Nominees”), was appointed as an independent Class II director of the Company with a term expiring at the 2022 annual meeting of the Company’s stockholders (the “2022 Annual Meeting”) or until such person’s earlier death, resignation, disqualification or removal and (ii) the Issuer committed to include the Agreed Nominees on the Issuer's recommended slate of nominees for election at the 2022 Annual Meeting.

The foregoing description of the Cooperation Agreement does not purport to be complete and is qualified by the full text of the Cooperation Agreement which is included as Exhibit B to this Schedule 13D by reference to Exhibit 10.1 of the Issuer’s Current Report on Form 8-K filed with the Securities and Exchange Commission (the “SEC”) on June 6, 2022 (the “Form 8-K”) and is incorporated by reference herein.

Depending on various factors including, without limitation, the Issuer’s financial position and strategic direction, actions taken by the Board, price levels of the Shares, other investment opportunities available to the Reporting Person, conditions in the securities market and general economic and industry conditions, the Reporting Person may in the future take such actions with respect to its investment position in the Issuer as it deems appropriate including, without limitation, purchasing additional Shares or selling some or all of its Shares, and/or engaging in short selling of or hedging or similar transactions with respect to the Shares, except as may be limited by the Cooperation Agreement.

As of the close of business on the date hereof, JANA may be deemed to beneficially own 3,529,118 Shares, representing approximately 5.3% of the Shares outstanding.

(b) JANA has sole voting and dispositive power over the 3,529,118 Shares, which power is exercised by the Principal.

(c) Information concerning transactions in the Shares effected by the Reporting Person during the past sixty days is set forth in Exhibit A hereto and is incorporated herein by reference. All of the transactions in Shares listed hereto were effected in the open market through various brokerage entities.

(d) No person (other than the Reporting Person) is known to have the right to receive or the power to direct the receipt of dividends from, or the proceeds from the sale of, the Shares.

On June 6, 2022, the Issuer and JANA entered into the Cooperation Agreement. A copy of such agreement is included as Exhibit B to this Schedule 13D and is incorporated by reference herein.

Except as otherwise set forth herein, the Reporting Person has no contracts, arrangements, understandings or relationships with any person with respect to the securities of the Issuer.

The following table sets forth all transactions in the Shares effected in the past sixty days by the Reporting Person. Except as noted below, all such transactions were effected in the open market through brokers and the price per share includes commissions. Where a price range is provided in the column Price Range ($), the price reported in that row’s column Price Per Share ($) is a weighted average price. These Shares were purchased in multiple transactions at prices between the price ranges indicated in the column Price Range ($). The Reporting Person will undertake to provide to the staff of the SEC, upon request, full information regarding the number of Shares sold at each separate price. 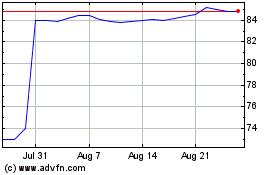 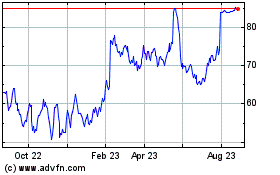 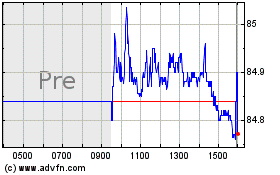