On March 24, 2021, Motorola Solutions, Inc. (the “Company”) entered into a new revolving credit agreement (the “New Credit Agreement”) with JPMorgan Chase Bank, N.A., as administrative agent (the “Agent”), and the several lenders and agents party thereto. The New Credit Agreement provides for a $2.25 billion revolving credit facility with a $450 million letter of credit sublimit and matures on March 24, 2026, subject to the Company’s option to extend the maturity date for up to two one-year periods upon the terms and conditions set forth in the New Credit Agreement.

Certain other material terms of the New Credit Agreement include (i) a financial covenant requiring the Company to maintain compliance with a leverage ratio; (ii) restrictive covenants (subject, in each case, to certain customary exceptions and amounts) that limit the Company’s ability to, among other things, create liens and enter into sale and leaseback transactions; (iii) customary events of default, upon the occurrence of which, after any applicable grace period, the lenders will have the ability to accelerate all outstanding loans thereunder and terminate the commitments; and (iv) customary representations and warranties. In addition, the Company has the ability at any time to increase the aggregate commitments under the New Credit Agreement from $2.25 billion to $2.75 billion by arranging with existing lenders and/or new lenders for them to provide additional commitments, subject to the condition that no default or event of default shall have occurred and be continuing and other terms and conditions set forth in the New Credit Agreement.

Some of the lenders under the New Credit Agreement and their affiliates have various relationships with the Company and its subsidiaries involving the provision of financial services, including commercial investment banking, underwriting, foreign exchange and other derivative arrangements.

In connection with entering into the New Credit Agreement described in Item 1.01 of this Current Report on Form 8-K, the Company terminated its existing revolving credit agreement, dated as of April 25, 2017, with JPMorgan Chase Bank, N.A., as administrative agent, and the other financial institutions party thereto (the “Old Credit Agreement”). There were no outstanding loan borrowings under the Old Credit Agreement at the time of termination and no early termination penalties were incurred by the Company.

The information contained in Item 1.01 of this Current Report on Form 8-K is incorporated by reference into this Item 2.03. 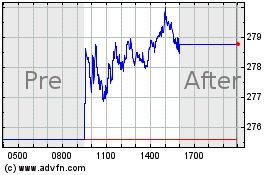