Flotek Industries, Inc.
(Exact name of registrant as specified in its charter)

(Not applicable)
(Former name or former address, if changed since last report.)

If an emerging growth company, indicate by check mark if the registrant has elected not to use the extended transition period for complying with any new or revised financial accounting standards provided pursuant to Section 13(a) of the Exchange Act. ¨
Appointment of Harsha V. Agadi to Board of Directors

On July 31, 2020, the board of directors (the "Board") of Flotek Industries, Inc. (the "Company") increased the number of directors on the Board from six to seven and appointed Harsha V. Agadi to the Board and to the Compensation Committee of the Board. Mr. Agadi will serve as the Chairman of the Compensation Committee.
Mr. Agadi, age 57, is currently the Chairman and CEO of GHS Holdings, LLC, an investing and restaurant consulting business. Mr. Agadi serves on the board of Crawford & Company (NYSE: CRDA), the world's largest publicly-listed independent claims management company operating in over 40 countries, where he was President and CEO from August 2015 to May 2020. Mr. Agadi also serves on the board of Diversified Foodservice Supply, Inc, a leading private distributor of maintenance repair and operation parts, supplies and equipment to the foodservice industry.

Mr. Agadi previously served as chairman of the board for Quiznos, LLC and The Krystal Company, and was the chairman of the compensation committee for Belmond Ltd., a worldwide hospitality and leisure company, and Crawford & Company. Mr. Agadi was Chairman and CEO of Friendly’s Ice Cream LLC, a restaurant chain which provides ice cream desserts and sandwiches; President and CEO of Church’s Chicken, a franchised quick service chicken restaurant with operations in 20 plus countries around the world; and has served in leadership positions at other prominent global companies for more than 30 years. Mr. Agadi is also the Chairman of the SKSVMA College of Engineering and Agadi Sunrise Hospital Private Limited in India. Mr. Agadi has a Master of Business Administration from the Fuqua School of Business at Duke University and a Bachelor of Commerce from the University of Mumbai.

The Company believes that Mr. Agadi's extensive experience as a senior executive and board member, and in particular his experience as chairman of boards of directors and compensation committees, makes him a valuable addition to the Board and the Compensation Committee of the Board.

Mr. Agadi has not been involved in any related transactions or relationships with the Company that would require disclosure under Item 404(a) of Regulation S-K. There are no agreements or understandings between Mr. Agadi and any other persons pursuant to which Mr. Agadi was selected as a director. The Board has considered any relationships that Mr. Agadi has with the Company and has determined that he is independent.

Mr. Agadi will be compensated in accordance with the Company's customary compensation practices for non-employee directors as previously disclosed in the Company's Definitive Proxy Statement filed on April 3, 2020, including a grant of shares of restricted common stock of the Company.

Appointment of Ryan Ezell as President of Chemistry Technologies

On August 3, 2020, the Board promoted Ryan Ezell to the position of President of Chemistry Technologies. Previously, Dr. Ezell served at the Company as Senior Vice President, Operations since March 2020 and Vice President, Operations since August 2019. Prior to joining Flotek, Dr. Ezell was a global leader at Halliburton from May 2006 to July 2019, most recently serving as Vice President of Baroid Drilling Fluids. He has over 20 years of experience in the oil and gas services industry, including 10 years of international expatriate experience in Africa and the Middle East, Europe and Eurasia regions. Dr. Ezell earned a Bachelor of Science degree in Chemistry from Millsaps College and a Ph. D in Polymer Science from the University of Southern Mississippi. He is a published scientist and an author on more than 26 patents.

Dr. Ezell does not currently have an employment agreement with the Company. Pursuant to Dr. Ezell's current compensation arrangements, Dr. Ezell receives an annual base salary of $300,000 and is eligible to participate in the Company's long-term incentive plans. Dr. Ezell is also eligible to earn an annual bonus with a target amount equal to his annual base salary multiplied by 75%, based on achievement of performance goals established by the compensation committee of the Board. In the event that Dr. Ezell's employment is terminated by the Company, Dr. Ezell will receive severance equal to twelve months base salary.

On August 6, 2020, the Company issued a press release announcing Mr. Agadi's appointment. The press release is furnished herewith as Exhibit 99.1 and is incorporated herein by reference.
Item 9.01.    Financial Statements and Exhibits 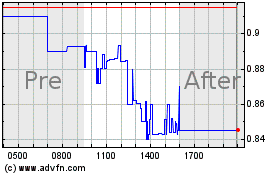