"During the third quarter, we entered into agreements to realize the tremendous value created in our San Diego life science portfolio," commented James Farrar, the Company's Chief Executive Officer.  "The $576 million sale is transformational for the Company and is anticipated to generate a gain on sale of approximately $430 million."

"The assets being sold are unencumbered by debt, allowing us to redeploy all of the proceeds into premier office properties across some of the best markets in the country.  Our team has been advancing our acquisition pipeline, which includes a number of incredible properties in high growth markets.  These targets possess highly amenitized locations, new and modern construction and long contractual lease terms with strong tenants.  We anticipate that executing on this strategy will enhance our portfolio, significantly increase our earnings per share and generate predictable, long-term cash flow.  Based on our confidence in redeploying the sale proceeds, we have accelerated the sale closing date of the entire Sorrento Mesa transaction to December 2021.  This is an exciting time of value creation and growth for our Company and we look forward to providing updates in the coming quarters."

The Company reported that its total portfolio as of September 30, 2021 contained 5.6 million net rentable square feet and was 88.7% occupied.

During the quarter, the Company entered into two definitive agreements to sell all of its combined life science holdings in the Sorrento Mesa submarket of San Diego for $576 million. The transactions are expected to generate aggregate net proceeds, after estimated closing and transaction costs, of approximately $546 million, which equates to $12.38 per common share.  The properties to be sold are unencumbered by debt.  The northern portion of the portfolio sale is scheduled to close in December 2021 for $395 million. The southern portion of the portfolio sale was initially scheduled to close in February 2023 for $181 million, but the Company has accelerated the closing to December 2021 to correspond with potential acquisition opportunities.  Both transactions are proceeding towards the scheduled closings and are subject to customary closing conditions.

On September 16, 2021, the Company's board of directors approved and the Company declared a cash dividend of $0.15 per share of the Company's common stock for the three months ended September 30, 2021. The dividend was paid on October 22, 2021 to common stockholders and unitholders of record as of October 8, 2021.

The Company is updating its full year 2021 guidance based on year-to-date performance and its expectations for the remainder of the year.  The sale transactions for the Sorrento Mesa portfolio are not expected to have a material impact on 2021 guidance, as the closings are not scheduled to occur until December 2021. General and Administrative Expenses and 2021 Core FFO per diluted share expectations were impacted by a one-time, $5.0 million accrual of general and administrative expense.  This accrual was made to reflect a one-time employee incentive compensation expense anticipated to be paid at year-end as a result of the pending Sorrento Mesa sale, which is anticipated to generate a $430 million gain on sale.

The Company's guidance is based on current plans and assumptions and subject to the risks and uncertainties more fully described in the Company's filings with the United States Securities and Exchange Commission. This outlook reflects management's view of current and future market conditions, including assumptions such as the pace of future acquisitions and dispositions, rental rates, occupancy levels, leasing activity, uncollectible rents, operating and general administrative expenses, weighted average diluted shares outstanding and interest rates.  The Company reminds investors that the impacts of the COVID-19 pandemic are uncertain and impossible to predict.  See "Forward-looking Statements" below.

City Office's management will hold a conference call at 11:00 am Eastern Time on November 3, 2021.

The webcast will be available under the "Investor Relations" section of the Company's website at www.cioreit.com. The conference call can be accessed by dialing 1-866-262-0919 for domestic callers and 1-412-902-4106 for international callers.

A supplemental financial information package to accompany the discussion of the results will be posted on www.cioreit.com under the "Investor Relations" section.

Funds from Operations ("FFO") – The National Association of Real Estate Investment Trusts ("NAREIT") states FFO should represent net income or loss (computed in accordance with GAAP) plus real estate related depreciation and amortization (excluding amortization of deferred financing costs) and after adjustments of unconsolidated partnerships and joint ventures, gains or losses on the sale of property and impairments to real estate.

Core Funds from Operations ("Core FFO") – We calculate Core FFO by using FFO as defined by NAREIT and adjusting for certain other non-core items.   We also exclude from our Core FFO calculation acquisition costs, loss on early extinguishment of debt, changes in the fair value of the earn-out, changes in fair value of contingent consideration and the amortization of stock based compensation.

We believe Core FFO provides a useful metric in comparing operations between reporting periods and in assessing the sustainability of our ongoing operating performance. Other equity REITs may calculate Core FFO differently or not at all, and, accordingly, the Company's Core FFO may not be comparable to such other REITs' Core FFO.

Adjusted Funds from Operations ("AFFO") – We compute AFFO by adding to Core FFO the non-cash amortization of deferred financing fees and non-real estate depreciation and then subtracting cash paid for recurring tenant improvements, leasing commissions, and capital expenditures, and eliminating the net effect of straight-line rent / expense, deferred market rent and debt fair value amortization.  Recurring capital expenditures exclude development / redevelopment activities, capital expenditures planned at acquisition and costs to reposition a property.  We exclude first generation leasing costs within the first two years of our initial public offering or acquisition, which are generally to fill vacant space in properties we acquire or were planned at acquisition.  We have further excluded all costs associated with tenant improvements, leasing commissions and capital expenditures which were funded by the entity contributing the properties at closing.

Along with FFO and Core FFO, we believe AFFO provides investors with appropriate supplemental information to evaluate the ongoing operations of the Company. Other equity REITs may calculate AFFO differently, and, accordingly, the Company's AFFO may not be comparable to such other REITs' AFFO.

Net Operating Income ("NOI"), Adjusted Cash NOI (CIO share) – We define NOI as rental and other revenues less property operating expenses.  We define Adjusted Cash NOI as NOI less the effect of recurring straight-line rent / expense, deferred market rent, and any amounts which are funded by the selling entities and NCI in properties.

We consider NOI and Adjusted Cash NOI to be appropriate supplemental performance measures to net income because we believe they provide information useful in understanding the core operations and operating performance of our portfolio.

This press release contains certain "forward-looking statements" within the meaning of the Private Securities Litigation Reform Act of 1995, Section 27A of the Securities Act of 1933, as amended, and Section 21E of the Securities Exchange Act of 1934, as amended. Certain statements contained in this press release, including those that express a belief, expectation or intention, as well as those that are not statements of historical fact, are forward-looking statements within the meaning of the federal securities laws and as such are based upon the Company's current beliefs as to the outcome and timing of future events. Forward-looking statements are generally identifiable by use of forward-looking terminology such as "approximately," "anticipate," "assume," "believe," "budget," "contemplate," "continue," "could," "estimate," "expect," "future," "hypothetical," "intend," "may," "outlook," "plan," "potential," "predict," "project," "seek," "should," "target," "will"  or other similar words or expressions. There can be no assurance that actual forward-looking statements, including projected capital resources, projected profitability and portfolio performance, estimates or developments affecting the Company will be those anticipated by the Company. Examples of forward-looking statements include those pertaining to expectations regarding our financial performance, including under metrics such as NOI and FFO, market rental rates, national or local economic growth, estimated replacement costs of our properties, the Company's expectations regarding tenant occupancy, re-leasing periods, projected capital improvements, expected sources of financing, expectations as to the likelihood and timing of closing of acquisitions, dispositions, or other transactions, the expected operating performance of the Company's current properties, anticipated near-term acquisitions and descriptions relating to these expectations, including, without limitation, the anticipated net operating income yield and cap rates, and changes in local, regional, national and international economic conditions, including as a result of the ongoing COVID-19 pandemic. Forward-looking statements presented in this press release are based on management's beliefs and assumptions made by, and information currently available to, management.

The forward-looking statements contained in this press release are based on historical performance and management's current plans, estimates and expectations in light of information currently available to us and are subject to uncertainty and changes in circumstances. There can be no assurance that future developments affecting us will be those that we have anticipated. Actual results may differ materially from these expectations due to the factors, risks and uncertainties described above, changes in global, regional or local political, economic, business, competitive, market, regulatory and other factors described in our news releases and filings with the SEC, including but not limited to those described in our Annual Report on Form 10-K for the year ended December 31, 2020 under the heading "Risk Factors" and in our subsequent reports filed with the SEC, many of which are beyond our control. Should one or more of these risks or uncertainties materialize, or should any of our assumptions prove to be incorrect, our actual results may vary in material respects from what we may have expressed or implied by these forward-looking statements. We caution that you should not place undue reliance on any of our forward-looking statements. Any forward-looking statement made by us in this press release speaks only as of the date of this press release. Factors or events that could cause our actual results to differ may emerge from time to time, and it is not possible for us to predict all of them. The Company does not guarantee that the assumptions underlying such forward-looking statements contained in this press release are free from errors. Unless otherwise stated, historical financial information and per share and other data are as of September 30, 2021 or relate to the quarter ended September 30, 2021. We undertake no obligation to publicly update any forward-looking statement, whether as a result of new information, future developments or otherwise, except as may be required by applicable securities laws. 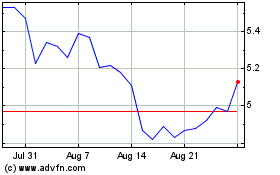 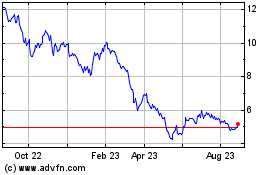 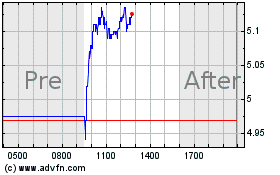