BBVA posted a net attributable profit of €1.65 billion in the first quarter of 2022 (+36.4 percent yoy at current exchange rates, +41 percent in constant euros), on the back of revenue growth, bolstered by solid activity (+10.6 percent), and improved risk indicators. Between January and March 2022, the Group reported its highest operating income and the highest recurring profit ever. Furthermore, it saw extraordinary progress in the execution of its strategy, with a record quarter in customer acquisition and sustainable financing. The efficiency ratio improved significantly, reaching 40.7 percent, and in terms of profitability, ROTE and ROE improved to 15.9 percent and 15.1 percent, respectively. BBVA maintains a solid capital position, with a fully-loaded CET1 ratio of 12.70 percent. 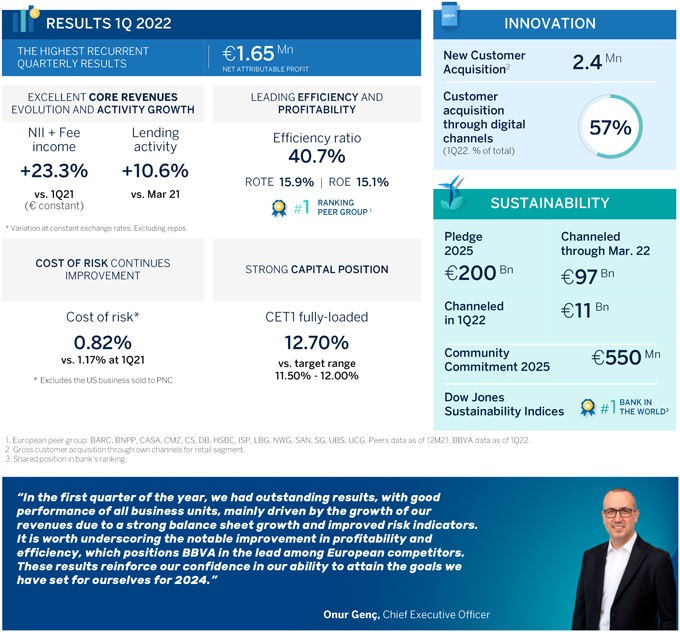 Despite a complex environment, BBVA results in the first quarter benefited from good performance from recurring revenues (net interest income and fees and commissions), boosted by positive business activity, and by lower loan-loss provisions.

Except where otherwise stated, in order to better understand the evolution of each of the main headings, changes in the income statement described below refer to constant exchange rates. In other words, they do not take currency fluctuations into account.

Net interest income reached €4.16 billion, up 26.3 percent from the same period a year earlier. In this heading, it is worth mentioning the strong performance by Mexico, Turkey and South America, where higher interest rates set by monetary authorities in 2021 and 1Q22 are starting to show in the results. Net fees and commissions also improved during the period, with a 14.1 percent increase to reach €1.24 billion. Recurring revenues stood at €5.4 billion, 23.3 percent more than in 1Q21. This heading has grown for the past four quarters.

Meanwhile, NTI grew 8.7 percent, reaching €580 million, mostly on the back of a strong performance by the Global Markets unit. The positive evolution of recurring revenues and NTI boosted gross income by 21.3 percent yoy to €5.94 billion.

Operating expenses reached €2.42 billion, up 8.5 percent yoy, below the average inflation in the countries where BBVA has a presence (10.3 percent). A solid performance of the gross income helped maintain positive jaws and the efficiency ratio stood at 40.7 percent, the best figure among comparable European peers, following a decline of 528 basis points compared to the end of 2021.

1 Excludes non-recurring impacts in 1T21, which stood at €177 million from BBVA USA and the rest of companies included in the sale to PNC.

Consequently, operating income reached a new record of €3.53 billion (+31.9 percent yoy). Impairments on financial assets, provisions and other losses and gains declined 17.9 percent and 88.5 percent yoy, respectively. Lower loan-loss provisions helped the accumulated cost of risk fall from 0.93 percent as of December 31, to 0.82 percent at the end of March, with better than expected performance. The remainder of risk indicators also improved over the past three months. Between December 31 and March 31, the NPL ratio improved from 4.1 to 3.9 percent, while the NPL coverage ratio increased from 75 to 76 percent.

The BBVA Group posted a net attributable profit of €1.65 billion in 1Q22, up 41 percent compared to the same period a year earlier. This is the highest recurring profit ever, with an increase of 68.4 percent vs. the recurring result in 1Q21. 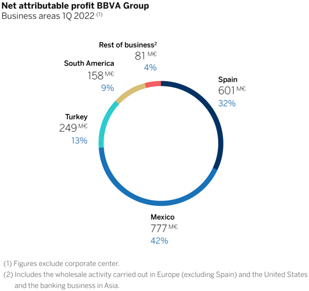 These solid results helped improve BBVA’s profitability, already a leader among comparable European peers, with ROTE of 15.9 percent, and ROE of 15.1 percent in the quarter.

As for balance sheet and activity, loans and advances (gross) to customers stood at €346.43 billion, up 5.0 percent compared to Dec. 31, thanks mostly to business loans, and to a lesser extent, retail loans. Customer funds increased 2.2 percent, to €507.96 billion, mainly boosted by demand deposits.

BBVA continued to create value for its shareholders: the tangible book value per share plus dividends stood at €6.93, up 12.6 percent from a year earlier. On April 8, 2022, the bank paid an additional dividend of €0.23 per share (gross) for the year 2021. This payment is in addition to the €0.08 per share that was paid in October 2021, and represents the highest cash dividend per share (€0.31) paid by the Group in the past ten years.

As for capital, the Group’s fully-loaded CET ratio stood at 12.70 percent as of March 31, 2022, virtually stable since the end of 2021, despite absorbing 10 bps for the $300 million investment in Brazil’s Neon, as well as the solid growth in activity during 1Q22. This figure also stands above both the target range set by the Group (between 11.5 and 12 percent) and the regulatory requirement (8.60 percent).

During the first quarter of the year, BBVA acquired a record of 2.4 million new customers, of which 57 percent came through digital channels. Digital customer acquisition grew 81 percent compared to the same quarter a year earlier. Digital customers accounted for 70 percent of the total at the end of March, totalling 43.6 million (+36 percent from March 2020). Mobile customers grew 41 percent from that same date, to 41.5 million and represent 67 percent of the total.

Digital sales accounted for 77 percent of all units sold. 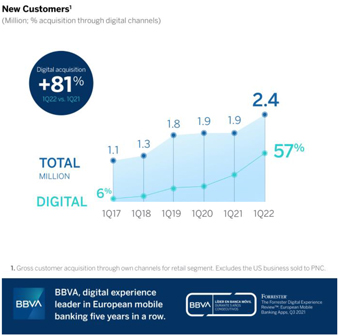 BBVA also reached a new milestone in sustainability, channeling €11 billion in sustainable financing between January and March 2022, reaching a total of €97 billion of its €200-billion pledge from 2018 to 2025. By way of example, financing of sustainable mobility, such as loans toward the purchase of electric and hybrid vehicles grew 2.5 times last year, with home energy efficiency solutions increasing 4 times, and green loans to companies almost doubling in the same period.

Innovation and disruption as growth levers

BBVA is developing global digital banking solutions to cater to customers’ ever changing needs. It is also focusing on new and attractive markets like Italy, where it launched a fully digital retail bank. BBVA’s firm commitment to the entrepreneurial ecosystem also remains, with selected investments in digital banks such as Atom in the U.K., Solarisbank in Europe and Neon in Brazil. 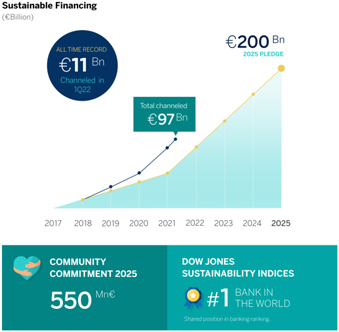 Finally, and following the success of venture capital investments in the fintech arena through Propel and Sinovation Ventures, BBVA is extending its reach to other areas such as greentech to decarbonize the planet while transforming the industry. Two recent examples are the investments in Lowercarbon and Leadwind. With these investments, the goal is to achieve attractive financial returns, learn from new technologies and business models, and create synergies that will place BBVA as the leading bank for the companies of the future.

On another note, the Board of Directors approved the proposal from the Appointments and Corporate Governance Committee, to designate independent director Raúl Galamba as a lead director, replacing Juan Pi Llorens, who has successfully held this position during the 3-year term, after being appointed by the Board on April 29, 2019. Pi Llorens will continue as a BBVA board member and as chair of the Risk and Compliance Committee.

The Board of Directors has also agreed to appoint Ana Revenga to the Technology and Cybersecurity Committee.

Lending in Spain increased 3.4 percent yoy, thanks to growth in the most profitable segments, such as commercial, consumer loans and cards. Customer funds also grew 5.2 percent on the back of time deposits and off-balance sheet funds. Spain posted its best quarterly net attributable profit of the past 12 years, €601 million (+62.3 percent yoy), boosted by a good performance of gross income, a significant improvement in efficiency, as well as lower impairments and provisions. As for risk indicators, the NPL ratio (4.2 percent) and the NPL coverage ratio (61.4 percent) improved slightly compared with the end of 2021. The cost of risk improved to 0.17 percent, vs. 0.30 percent at the end of 2021.

In Mexico, lending activity grew 8.9 percent yoy in all segments, particularly in SMEs, credit cards and mortgages. Customer resources increased 11 percent in the same period, with a strong evolution of demand deposits and off-balance sheet funds. As for the P&L account, BBVA reported a record net attributable profit of €777 million in 1Q22, up 49 percent compared to the previous year. This result was made possible thanks to a strong performance by recurring revenues, mainly boosted by solid net interest income and lower loan-loss provisions, which helped absorb the increase in operating expenses. Regarding risk indicators, the NPL ratio improved from 3.2 percent at the end of 2021 to 3 percent, and the NPL coverage ratio rose from 106 percent to 115 percent. The cost of risk ended at 2.84 percent in 1Q22.

In Turkey, lending in Turkish lira grew 40.8 percent yoy, with relevant increases in retail and commercial loans. Customer deposits in Turkish lira grew 58.1 percent from the previous year. Net attributable profit stood at €249 million in 1Q22, up 129.6 percent yoy, on the back of a strong growth of recurring revenues, especially from net interest income and a higher contribution of NTI.

As for risk indicators, the NPL ratio improved to 6.7 percent from 7.1 percent at the end of 2021, while the NPL coverage ratio remained stable at 75 percent. The cost of risk also improved, declining from 1.3 percent in 4Q21 to 1.0 percent.

In South America, lending activity increased 11.1 percent yoy, with growth in all segments. Customer funds grew 7.6 percent. South America posted a net attributable profit of €158 million in 1Q22, up 68.2 percent yoy, mostly due to a better performance of net interest income and fees and commissions. Colombia posted a profit of €69 million, Peru earned €51 million and Argentina reported €18 million. The NPL ratio improved slightly to 4.3 percent and the NPL coverage ratio remained stable at 99 percent. The cost of risk also improved to 1.17 percent, from 1.65 percent at the end of 2021. 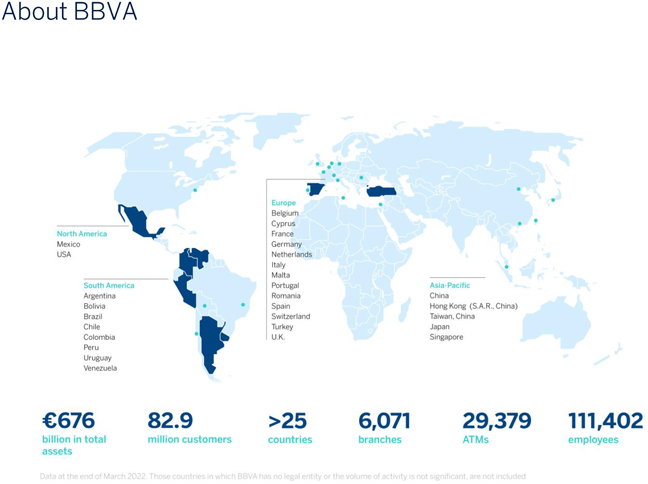 BBVA is a customer-centric global financial services group founded in 1857. The Group has a strong leadership position in the Spanish market, is the largest financial institution in Mexico and it has leading franchises in South America. It is also the leading shareholder in Turkey’s Garanti BBVA and has an important investment, transactional and capital markets banking business in the U.S. Its purpose is to bring the age of opportunities to everyone, based on our customers’ real needs: provide the best solutions, helping them make the best financial decisions, through an easy and convenient experience. The institution rests in solid values: Customer comes first, we think big and we are one team. Its responsible banking model aspires to achieve a more inclusive and sustainable society. 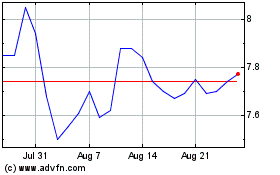 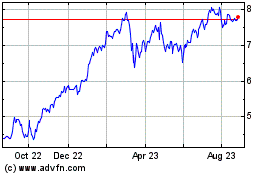 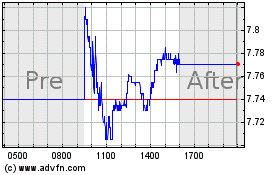