LOS ANGELES, Oct. 21, 2020 /PRNewswire/ -- The annual REVOLT Summit x AT&T is bringing together the biggest names in Hip Hop and culture, including rappers and culture curators DaBaby, Killer Mike, Saweetie, and Tyga for an entirely virtual and free 3-day summit from October 23-25. The virtual event will continue the REVOLT Summit x AT&T tradition of creating viral, cultural moments with the young, Black, and vocal audience at the center of history-making events, instilling the idea that "the world is yours." 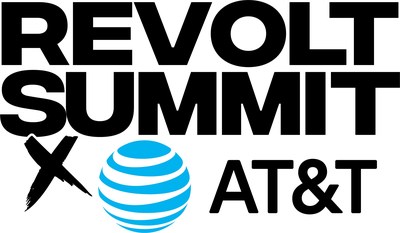 Panel conversations and workshops are set to explore the topics that are most relevant to the young Black artists and leaders of today. Featured panels and workshops include:

Leading up to the flagship event, REVOLT and AT&T premiered a digital content series ROAD TO SUMMIT - THE WORLD IS YOURS, co-produced by Teyana "Spike Tey" Taylor & the Aunties. The ROAD TO SUMMIT also featured the return of the Be Heard talent competition, which kicked off on September 19 searching for the newest talent in hip-hop. Additionally, programming in the month leading up to REVOLT Summit x AT&T included one-on-one mentoring with AT&T's Office Hours and Executive Chats with leading industry executives including A&R legend KP the Great and CEO and Founder of EMPIRE Ghazi Shami, among others.

"Although this moment has caused a lot of uncertainty, it has also presented an opportunity for the next generation of young leaders to make notable shifts, develop smarter ideas and be proactive in designing the future," said Detavio Samuels, COO REVOLT Media & TV.  "With this year's Summit being both free and virtual, we are inviting a global audience to engage in conversations that truly drive culture forward with the some of the most respected names in Hip Hop.

"Powering people-to-people connections is at the heart of what we do at AT&T. We are honored that the REVOLT Summit x AT&T has played a role in connecting up-and-coming Black leaders and talent to each other, industry experts and the world," said Angela Burgin, Director, Marketing Management & Special Events, AT&T.  "At AT&T, we are proud to stand for equality and to put our resources towards supporting Black media, creatives and professionals."

"It was important for me to be a part of this conversation because brothers need to do more conversing with one another, in front of and behind the camera. This was an opportunity to display how Black men, who don't all share the same philosophy or political ideology, can engage with one another for the betterment of our community," said Michael Render, pka Killer Mike, an activist, businessman and Grammy Award winning rapper.

Aside from the various panels and workshops, REVOLT Summit x AT&T will provide valuable entertainment, engagement and connectivity for attendees through the following:

Other brands participating to elevate the experience along with AT&T include CÎROC, Hyundai, McDonald's and Target.

About AT&T Communications
We help family, friends and neighbors connect in meaningful ways every day. From the first phone call 140+ years ago to mobile video streaming, we innovate to improve lives. We have the nation's fastest wireless network.** And according to America's biggest test, we have the nation's best wireless network.*** We're building FirstNet® just for first responders and creating next-generation mobile 5G. With a range of TV and video products, we deliver entertainment people love to talk about. Our smart, highly secure solutions serve nearly 3 million global businesses – nearly all of the Fortune 1000. And worldwide, our spirit of service drives employees to give back to their communities.

© 2020 AT&T Intellectual Property. All rights reserved. AT&T, the Globe logo and other marks are trademarks and service marks of AT&T Intellectual Property and/or AT&T affiliated companies. FirstNet and the FirstNet logo are registered trademarks and service marks of the First Responder Network Authority. All other marks contained herein are the property of their respective owners.

**Based on analysis by Ookla® of Speedtest Intelligence® data median download speeds for Q3 2020. Ookla trademarks used under license and reprinted with permission.