Amplify Energy Corp. (NYSE: AMPY) (“Amplify” or the “Company”) announced today its operating and financial results for the third quarter of 2021.

On October 2, 2021, contractors operating under the direction of Beta Operating Company, LLC (“Beta”), a subsidiary of Amplify, observed an oil sheen on the water approximately four miles off the coast of Newport Beach, California (the “Incident”). Beta platform personnel were notified and promptly initiated the Company’s Oil Spill Response Plan, which was reviewed and approved by the Bureau of Safety and Environmental Enforcement’s Oil Spill Preparedness Division within the United States Department of the Interior, and which included the required notifications of specified regulatory agencies. On October 3, 2021, a Unified Command, consisting of the Company, the U.S. Coast Guard and California Department of Fish and Wildlife’s Office of Spill Prevention and Response, was established to respond to the Incident. The Company is and has been fully committed to working cooperatively within the Unified Command and with all relevant agencies to respond to the Incident and supporting all associated ongoing investigations.

On October 5, 2021, the Unified Command announced that reports from its contracted commercial divers and Remotely Operated Vehicle footage indicated that a 4,000-foot section of the Company’s pipeline had been displaced with a maximum lateral movement of approximately 105 feet and that the pipeline had a 13-inch split, running parallel to the pipe. On October 14, 2021, the U.S. Coast Guard announced that it had a high degree of confidence the size of the release was approximately 588 barrels of oil, which is below the previously reported maximum estimate of 3,134 barrels. On October 16, 2021, the U.S. Coast Guard announced that it had identified the Mediterranean Shipping Company (DANIT) as a “vessel of interest” in connection with an anchor-dragging incident, which occurred in close proximity to the Company’s pipeline, and that additional vessels of interest continue to be investigated. The cause, timing and details regarding the Incident are currently under investigation and any information regarding the Incident is preliminary.

The Company carries customary industry insurance policies, including loss of production income insurance, which it expects will cover a material portion of the total aggregate costs associated with the Incident, including loss of revenue resulting from suspended operations. However, the Company can provide no assurance that its coverage will adequately protect it against liability from all potential consequences, damages and losses related to the Incident.

In response to the Incident, all operations have been suspended and the pipeline has been shut-in until the Company receives the required regulatory approvals to begin operations. At present, given that the pipeline to shore is not operational, no operations are underway in the Beta field.

During the third quarter of 2021, Amplify generated $27.1 million of Adjusted EBITDA, an increase of approximately $3.3 million from $23.8 million in the prior quarter. Third quarter Adjusted EBITDA exceeded internal projections as a result of production outperformance and strong price realizations.

During the third quarter of 2021, average daily production was approximately 25.1 MBoepd, a decrease of 1% from 25.3 MBoepd in the second quarter. Production exceeded internal expectations during the quarter, driven primarily by the low-decline profile of the Company’s East Texas assets and the successful workover program in Oklahoma.

The Company’s commodity product mix for the quarter consisted of 41% crude oil, 16% NGLs, and 43% natural gas. On a quarter-over-quarter basis, Amplify’s oil composition increased by approximately 3%.

Total oil, natural gas and NGL revenues in the third quarter of 2021 were approximately $96.8 million, before the impact of derivatives, compared to $80.3 million in the second quarter. The Company realized a loss on commodity derivatives of $18.5 million during the quarter, compared to a $12.7 million loss during the previous quarter, consisting of $22.6 million in realized losses from active contracts, partially offset by a $4.1 million gain from in-the-money contracts related to the third quarter of 2021 that were monetized in April 2020. The hedging loss experienced during this quarter was primarily attributed to the hedges placed earlier in 2020 when the commodity pricing environment was materially lower and highlights the substantial recovery in prices in 2021.

The following table sets forth information regarding average realized sales prices for the periods indicated:

Lease operating expenses in the third quarter of 2021 were approximately $34.5 million, or $14.92 per Boe, an increase of approximately $5.8 million compared to $28.7 million, or $12.46 per Boe, from the second quarter of 2021. The increase was largely attributable to previously disclosed Level II and Level III platform inspections at Beta, accelerated facility maintenance projects at Bairoil, and increased electricity and fuel costs across all assets. Amplify remains committed to the disciplined management of operating expenses, and the asset teams continue to explore additional methods of reducing costs moving forward.

Severance and Ad Valorem taxes in the third quarter were approximately $6.0 million, an increase of $0.9 million compared to $5.1 million in the second quarter. On a percentage basis, Amplify paid approximately 6.2% of total oil, NGL and natural gas sales revenue in taxes this quarter compared to 6.3% in the previous quarter.

Amplify incurred $5.0 million, or $2.18 per Boe, of gathering, processing and transportation expenses in the third quarter of 2021, compared to $5.1 million, or $2.20 per Boe, in the previous quarter.

Third quarter cash G&A expenses were $5.8 million, an increase of $0.8 million from the second quarter of 2021, primarily due to increased employee-related expenses.

Net interest expense was $3.1 million this quarter, held flat from the second quarter of 2021.

Amplify had an effective tax rate of 0% and did not record an income tax expense or benefit for the third quarter of 2021.

Cash capital spending during the third quarter of 2021 was approximately $10.5 million, a $0.4 million decrease from $10.9 million in the second quarter. The majority of capital expenditures in the third quarter were primarily attributed to development projects at Beta, the workover program in Oklahoma, and facilities upgrades and workovers at Bairoil.

The following table details Amplify’s capital incurred during the quarter and year-to-date:

Amplify’s operating strategy in Oklahoma remains focused on prioritizing a stable free cash flow profile and managing production through an active workover program. The workover program is focused on rod-lift conversions and ESP optimizations, which reduce future operating expenses and downtime while generating attractive returns in the current pricing environment. As of September 30, Amplify has converted approximately 48% of the field to rod lift and anticipates having approximately 51% of the field converted to rod lift by year end.

The Company continued its CO2 injection and water-alternating-gas pattern optimization at Bairoil to improve production performance. The third quarter of 2021 delivered strong operational reliability of the production facilities, and the technical team continued extensive evaluation of the reservoir to facilitate these efforts. Amplify intends to continue using new technologies, along with targeted workover activity, to drive further operational improvements and efficiencies.

During the third quarter, Amplify completed the first project of its previously announced phased development program, a case hole recompletion, and preliminary results were being evaluated prior to shutting in the field in response to the Incident. Lease operating expenses increased quarter over quarter primarily due to higher fuel and electrical costs associated with rising commodity prices. In addition, the aforementioned Level II and Level III inspections were completed during the quarter ahead of schedule.

As previously disclosed, all of the Company’s production and pipeline operations at the Beta Field have been suspended due to the oil spill in Southern California. As a result, Amplify is withdrawing its previously issued full-year 2021 guidance.

The following table reflects the hedged volumes under Amplify’s commodity derivative contracts and the average fixed, floor and ceiling prices at which production is hedged for October 2021 through December 2023, as of November 15, 2021:

Amplify’s financial statements and related footnotes will be available in its Quarterly Report on Form 10-Q for the quarter ended September 30, 2021, which Amplify expects to file with the Securities and Exchange Commission on November 15, 2021.

Adjusted EBITDA. Amplify defines Adjusted EBITDA as net income or loss, plus interest expense; income tax expense; depreciation, depletion and amortization; impairment of goodwill and long-lived assets; accretion of asset retirement obligations; losses on commodity derivative instruments; cash settlements received on expired commodity derivative instruments; losses on sale of assets; unit-based compensation expenses; exploration costs; acquisition and divestiture related expenses; amortization of gain associated with terminated commodity derivatives, bad debt expense; and other non-routine items, less interest income; gain on extinguishment of debt; income tax benefit; gains on commodity derivative instruments; cash settlements paid on expired commodity derivative instruments; gains on sale of assets and other, net; and other non-routine items. Adjusted EBITDA is commonly used as a supplemental financial measure by management and external users of Amplify’s financial statements, such as investors, research analysts and rating agencies, to assess: (1) its operating performance as compared to other companies in Amplify’s industry without regard to financing methods, capital structures or historical cost basis; (2) the ability of its assets to generate cash sufficient to pay interest and support Amplify’s indebtedness; and (3) the viability of projects and the overall rates of return on alternative investment opportunities. Since Adjusted EBITDA excludes some, but not all, items that affect net income or loss and because these measures may vary among other companies, the Adjusted EBITDA data presented in this press release may not be comparable to similarly titled measures of other companies. The GAAP measure most directly comparable to Adjusted EBITDA is net cash provided by operating activities.

Amplify Energy (NYSE:AMPY)
Historical Stock Chart
From May 2022 to Jun 2022 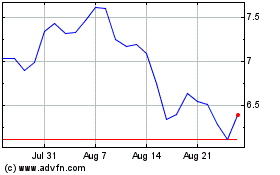 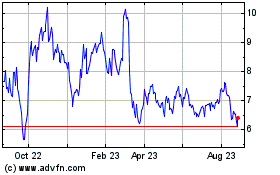 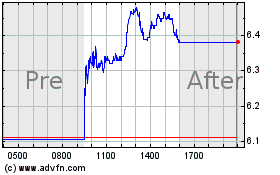